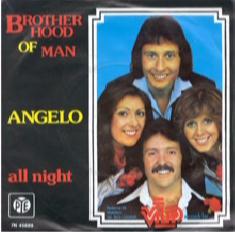 Angelo is a single by pop group .

Written by , and Martin Lee and produced by Hiller, it was the band's second UK number one single (after their Eurovision winner, the previous year), spending a single week at the top in August 1977. The song remained on the UK Chart for 12 weeks - 10 of them in the Top Ten - and was the 9th biggest selling single of the year. [ [http://www.chartstats.com/songinfo.php?id=7438 chartstats.com - Chart details] ] .

Despite being one of the biggest selling singles of the decade, the song has often been criticised in its similarity to " Fernando" - an earlier single released by pop group , who were seen as Brotherhood Of Man's main competition in the UK. Member and co-writer Sheriden denies any attempts to 'copy', stating that they "were simply writing in the style of the day". Other male member and co-writer, Lee also denies the allegation, but admits that "they were pretty close". ["I Love 1976", Channel 4 Television]

The song tells of a Shepherd in Mexico who falls in love with a rich girl, but he is met with resistance from her family. Both aware that her family would never allow the union, they run away together and commit . [ [http://homepage.ntlworld.com/gary.hart/lyricsb/brotherhood.html "Angelo" song lyrics] ]

The song is sung by the two female members of the group, and , although Sandra sings the opening lines alone.