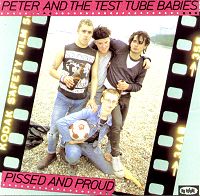 "Pissed and Proud" is an album of live recordings by English band, . It was originally released in 1982 on No Future Records and was recorded at three different venues &ndash; , , and their hometown, &ndash; during the August of 1982.

Although previously the band had released a raft of singles, this was their first full length album and was followed up by "Mating Sounds of South American Frogs" &ndash; their first full-length studio album &ndash; in 1983. This album includes a of "I'm the Leader of the Gang" &ndash; a song from 1973.

Many of these songs in their studio form were re-released on Anagram Records' compilation, "" in 1995.