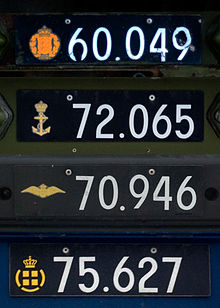 Danish vehicle licence plates normally have two letters and five digits. The code has no connection with the geographic location. The digits have number series based on vehicle type[1] [2].

Hearses are registered as yellow-plate cars (commercial use). The actual plates are, however, white in order to convey the impression of personal use.

There is also a possibility to have personal plate with any text. These plates cost 6200 DKK per set as of 2006.

A new design with an EU stripe was expected in 2008, but has been delayed to 12 October 2009.[3] This makes Denmark potentially the last EU country to adopt euro plates (Vehicle registration plates of Europe). The EU stripe is, however, currently optional.[4]

In preparation for the new design the font has been slightly condensed on some new plates issued since mid-2008.

Since July 2009, buyers a of new car pick a license plate with or without an EU strip. [5]

Cars registered in the Faroe Islands before 1996 have plates with white background, black text in Danish style, but with only one letter, F.

Cars registered after 1996 have white background, blue text in their own style, two letters and three digits, resembling Icelandic plates. There is a blue stripe to the left with the Faroese flag and the code "FO". The Faroe Islands are outside the EU.

The plates have a white background, and black text in Danish style with two letters "GR". EU stripe is not displayed because Greenland is outside the EU.