The Dorothy Chandler Pavilion is one of the halls in the Los Angeles Music Center (which is one of the three largest performing arts centers in the United States). The Music Center's other halls include the Mark Taper Forum, Ahmanson Theatre, and Walt Disney Concert Hall.

The Pavilion has 3,197 seats spread over four tiers, with chandeliers, wide curving stairways and rich décor. The auditorium's sections are the Orchestra (divided in Premiere Orchestra, Center Orchestra, Main Orchestra and Orchestra Ring), Circle (divided in Grand Circle and Founders Circle), Loge (divide in Front Loge and Rear Loge), as well as Balcony (divided in Front Balcony and Rear Balcony).

Construction started on March 9, 1962, and it was dedicated September 27, 1964. The Pavilion was named for Dorothy Buffum Chandler who “led (the) effort to build a suitable home for the Los Angeles Philharmonic and rejuvenate the performing arts in Los Angeles. The result was Mrs. Chandler’s crowning achievement, the Music Center of Los Angeles County. Her tenacious nine-year campaign on behalf of the Music Center produced more than $19 million in private donations” noted Albert Greenstein in 1999.

In order to receive approval for construction from the Los Angeles County Board of Supervisors, Mrs. Chandler promised Kenneth Hahn that the building would be open free for the public for one day a year. The result was the Los Angeles County Holiday Celebration, a Christmas Eve tradition sponsored the Board of Supervisors. The program is broadcast on KCET-TV and an edited version of the prior year's show is syndicated to public television stations via PBS.[1] 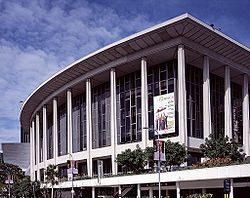 The Los Angeles Master Chorale, under Music Director Roger Wagner, was the other founding resident company at the Pavilion. Before creation of the Los Angeles Opera company, the New York City Opera came regularly on tour and performed in the Pavilion. One such tour, in 1967, consisted of two performances of Madama Butterfly, one of La Traviata, and two of Ginastera's Don Rodrigo, each with Plácido Domingo singing the main tenor role.

The Academy of Motion Picture Arts and Sciences held its annual Academy Awards in the Dorothy Chandler Pavilion from 1969 to 1987 and, according to the Academy's web site showing the locations of all Awards ceremonies, again from 1990 to 1994, in 1996, and, finally, in 1999.

Since the Los Angeles Philharmonic Orchestra and Los Angeles Master Chorale have moved to the newly-constructed and adjacent Disney Hall which opened in October 2003, the Pavilion is home of the Los Angeles Opera and Glorya Kaufman Presents Dance at the Music Center.

Since 1964, a Christmas Eve tradition for the Dorothy Chandler Pavilion is the annual free Holiday Celebration funded by Los Angeles County. It is six hours (from 3 pm to 9 pm) of music and dance by groups from all around Los Angeles county. The performances are also broadcast on the KCET public television station (with a one hour version broadcast on PBS since 2002). [1]