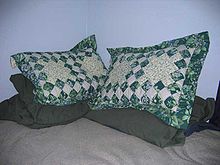 Pillows piled on the corner of a bed

A pillow is a large cushion support for the head, usually used while sleeping in a bed, or for the body as used on a couch or chair. There are also throw pillows (also called toss pillows), which are pillows that are purely decorative and not designed for support or comfort. Outside the USA these are generally considered a type of cushion, with the term pillow reserved for the pillows on a bed.

Pillows were originally used mainly by wealthy men in Asia, and after they were found in Ancient Egyptian tombs. The difficulty of sophisticated dyes and sewing techniques led to the development of pillows as an art form, with highly decorated pillows becoming prized commodities first in China and Persia and later in Medieval Europe. In Tudor England, pillows became widely-used; it was believed only women giving birth and weak men should use one.[1] The Industrial Revolution saw the mass production of decorated textiles and decorated pillows. Traditional Chinese pillows are often hard boxes made from stone, wood, metal, or porcelain instead of stuffed fabric.[2] Some ancient Egyptians slept on pillows made out of stone.[3] 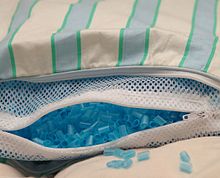 A Japanese pillow filled with plastic tubes in a mesh sack.

Internally, a pillow comprises a filler made from foam, synthetic fills, feathers, or down and viscoelastic foam and latex.[4] Traditionally straw was a filler, but this is uncomfortable and rarely used today. Feathers and down are the most expensive and usually the most comfortable; they offer the advantage of softness and their ability to conform to shapes desired by the user, more so than foam or fiber pillows. One of the disadvantages of a down-filled pillow is that a significant number of people are allergic to them. There are currently hypoallergenic varieties of down pillows to allow people sensitive to down to enjoy the comfort of feather or down pillows. In Asia, buckwheat is a common filler, as are plastic imitations. Such pillows tend to be smaller than a standard pillow. In India, cotton is also a common filler and is considered[who?] to be healthier than synthetic fills.

The fill is surrounded with a cover or shell made of cloth or silk, known as the pillow case or pillow slip. Some pillows have a fancier cover called a sham which is closed on all sides and usually has a slit in the back through which the pillow is placed. Rectangular standard bed pillow cases usually do not have zippers, but instead have one side open all the time, however, a zippered pillow protector is often placed around standard pillows with the case in turn covering the protector. It is recommended that all types of pillow covers be laundered periodically since they are the part that is in contact with a person's body. But even with regular washing, pillows tend to accumulate large amounts of dust and vast numbers of microbes among the fill and it is recommended that they be replaced every few years, especially for those with allergies.

A pillow is designed to provide support and comfort to the body and head. There are three main types of pillows; Bed pillows, Orthopedic pillows and Decorative pillows, with some overlapping of use between these. The appropriate size of a bed pillow depends on the size of the bed. In general a twin bed goes best with a standard pillow while for queen and king sized beds larger pillows are recommended.[5] 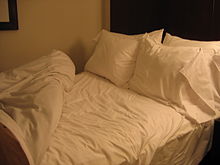 Several pillows on a bed.

Pillows are generally covered with a removable pillow case, which facilitates laundering. Apart from the color and from the material of which they are made, pillowcases are described by three characteristics:

Size conforms to the pillow the case is to contain. They are typically described as:

The main distinguishing feature is whether the pillow case is plain or with a valance around the edge. In the former case this is described as 'plain style' and in the latter as 'Oxford style'.[cite this quote]

"Oxford … has a 5cm-10cm valance round all four sides. With a hemstitched or corded decoration around the inner edge of the valance."

The opening/closure of pillow cases ranges from the straightforward approach in USA called simply bagstyle to the more usual European method with a pocket inside the open end to fully contain the pillow. This is Housewife style.[cite this quote]

"Housewife is … essentially a bag, with a flap in the open end to tuck the pillowcase behind to keep it in…"

Other methods of closure are ties or buttons/buttonholes.

A body pillow with a light blue pillow case

Body pillows are as long as a full adult body, providing support to the head and neck at the top and to the knees and legs lower down. This type of pillow can be especially useful in providing support for those who sleep on their sides and for pregnant women. Size is 40 cm x 140 cm.

Neck pillows support the neck by providing a deep area for the head to rest and a supportive area to keep the neck in alignment with the spine while sleeping. These can also be known as cervical pillows.

Travel pillows provide support for the neck in a sitting position. Their "U" shape fits around the back of the neck and keeps the head from slipping into an uncomfortable and possibly harmful position during sleep. However, U-shaped pillows can sometimes force the head forwards creating neck stiffness. They can also be known as a Bucky pillow.

Donut pillows are firm pillows shaped like a torus, with a space in the middle to alleviate pressure on the tailbone area while sitting. These pillows are used primarily by individuals who have suffered an injury to the tailbone area or who suffer pain from hemorrhoids or another ailment of the colon.

A pile of pillows on a couch.

Decorative Pillows serve a dual purpose. They likely have fancy cover material which serves to decorate the room where they are found. Since Decorative Textiles are commonly 54 inches in width, many decorative pillows finish about 17x17 inches. (54/3 = 18 less seam allowance) When used to decorate a fully made up bed, decorative pillows are likely thrown aside at bedtime, since they are not covered with a washable pillow case, thus, while found on the bed, they are primarily there for decoration, hence they fall under this category. These pillows may be custom made, as well as made by freelancers.

Decorative pillows are also found on furnishings in more public parts of the home, such as sofas, chairs and window seats. Here, their common use may overlap both orthopedic and bed pillows. For example, unless a person has some particular medical condition, they will likely use a handy decorative pillow for lumbar support, as needed, while seated on a sofa. Likewise, for the occasional nap, decorative pillows are handy for supporting the head or neck, even though they are not covered with a pillow case, as are bed pillows.

There are five common synonyms for decorative pillows which are descriptive of their use in the home. "Accent" Pillows emphasize or accent some other part of the home decor. The terms Sofa Pillow and Couch Pillow refer to the place these decorative pillows are likely found. The terms "toss pillow" and "throw pillow" may refer to the way they generally arrive in their places.[citation needed]

Novelty Pillows are shaped like humorous objects (a banana, tweety bird, a human leg, a chainsaw, a dill pickle, a former president), and are meant to brighten up and add humor to a room or lounge area.

Floor Pillows are another subset of decorative pillows. These pillows often finish 26x26 inches (one half of the width of the textile, less seam allowance)