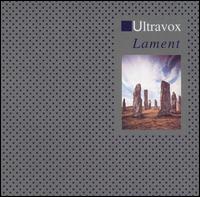 "Lament" is an album by , released in 1984. This was the seventh full album and the fourth of the band's most-recognisable incarnation, fronted by . It was also the last album featuring original drummer .

The album's sound saw the band continuing to move away from the /New Wave idiom, heading in a not entirely dissimilar direction to contemporaries such as , and featuring greater use of guitar and 'stadium' reverb.

The album was re-released on CD in 1999 with seven bonus tracks comprising of various b-sides and remixes from the "Lament" period.