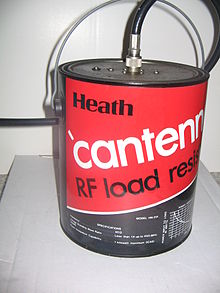 A dummy load is a device used to simulate an electrical load, usually for testing purposes.

The ideal dummy load provides a standing wave ratio (SWR) of 1:1 at the given impedance.

When testing audio amplifiers, it is common to replace the loudspeaker with a dummy load, so that the amplifier's handling of large power levels can be tested without actually producing intense sound. The simplest is a resistor bank to simulate the voice coil's resistance.

For loudspeaker simulation, a more complex network is more accurate, however, as actual loudspeakers are reactive and non-linear. There are many designs for loudspeaker simulators, which emphasize different characteristics of the actual speaker, such as the voice coil's inductance, mechanical suspension compliance, and cone mass.

See also: Thiele/Small and Electrical characteristics of a dynamic loudspeaker

There are also dummy loads for power supplies, known as load banks.

An electronic load (or e-load) is a device or assembly that simulates loading on an electronic circuit. It is used as substitute for a conventional ohmic load resistor. 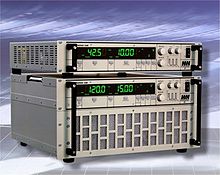 Electronic loads with 800W and 4200W from Höcherl & Hackl

The electronic load consumes electric energy and in most cases transforms it into heat. Fans or water-cooled elements are used as coolers. Under certain conditions, energy-recycling into the public power supply system is also possible.

Electronic loads are used in diverse applications, particularly for the test of power supplies, batteries, solar and fuel cells, generators. AC loads are used to test transformers, uninterruptible power supplies (UPS) or onboard power supplies. The equipment and power spectrum of such electronic loads begins with simplest circuits consisting in general of a potentiometer for current setting and a transistor circuit for power transforming. Further developed electronic loads supply several operating modes, in most cases constant current, voltage, power and resistance. Nowadays, the equipment may be controlled by a PLC or remotely by a PC. Settings and measured values such as input voltage and actual load current are indicated on a display.