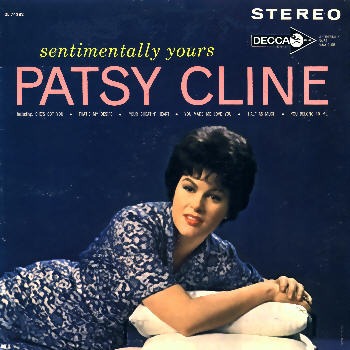 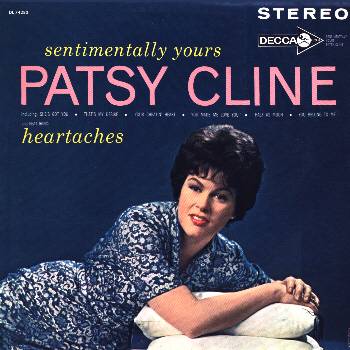 Lower caption = After the second single from the album, "Heartaches" became a hit on the Pop charts in late 1962, a re-released version with the text, "And featuring Heartaches" was added to the cover of the album. Singles
Name = Sentimentally Yours
Type = Studio
Single 1 =
Single 2 = Heartaches

"Sentimentally Yours" is the third studio album by American country music singer, , released , . The album was the final studio album Cline would record before her untimely death in a plane crash less than a year later.

"Sentimentally Yours" featured two of Cline's major hits singles that year. The first single, "She's Got You" was released early in 1962 and became a #1 hit on the Billboard Country Chart and crossed over into the Pop chart to #14, becoming another major crossover hit for Cline. The second single, a cover of "Heartaches", charted only on the Billboard Pop Chart in the United States. Both singles charted on the United Kingdom Singles Chart in 1962, becoming Cline's first singles to do so. The album did not include all of Cline's hits from that year. Her other hits included the Top 10 "" / "" and the Top 15 hit "," which were not released on albums.

The original version consited of a two-sided LP, with six songs on each side. The album was re-released when the Decca label changed to the name, MCA in 1973. The album was then digitally remastered on a CD format for the third re-issue in 1988, which was also released on MCA Records.

The original-released cover did not contain the yellow text underneath Cline's name. After "Heartaches" became a hit on the Pop charts in late 1962, the text "and featuring Heartaches" was addded to the cover. [ [http://www.patsycline.info/records/dl-74282.html Patsy Cline album information - Patsy Cline.Info.com] ]

The first recordings for the album began August 25, 1961 and ended six months later on February 28, 1962. All sessions were produced by , and held at the Bradley Film and Recording Studios in Nashville. [ [http://www.patsycline.info/records/dl-74282.html Patsy Cline album information - Patsy Cline.Info.com] ] On December 17, Cline recorded "She's Got You" only. Between then and February, Cline did an additional four more recording sessions to complete the amount of songs needed for the album (12 songs were on this album).

Out of the twelve songs this album consisted of, only two songs were new songs, "She's Got You" and the "She's Got You"'s flip side, "Strange". The ten remaining tracks were cover versions of standards. Some of the standards on this album included 's "You Belong to Me", 's "Half As Much", and ' "Your Cheatin' Heart." The single "Heartaches" was also a standard recording. Cline did mainly standards for this album because it was an attempt to appeal to the Pop market.