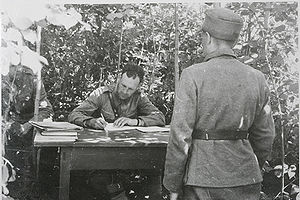 A court-martial (plural courts-martial, as "martial" is postpositive) is a military court. A court-martial is empowered to determine the guilt of members of the armed forces subject to military law, and, if the defendant is found guilty, to decide upon punishment.

Most militaries maintain a court-martial system to try cases in which a breach of military discipline may have occurred. Some countries, however, have no court-martial in time of peace; this is the case in France and Germany, for example, where ordinary, civilian courts are used instead.[1]

In addition, courts-martial may be used to try prisoners of war for war crimes. The Geneva Convention requires that POWs who are on trial for war crimes be subject to the same procedures as would be the holding army's own soldiers.

Most navies have a standard court-martial which convenes whenever a ship is lost; this does not presume that the captain should be suspected of wrongdoing, but merely that the circumstances surrounding the loss of the ship should be made part of the official record. Many ship captains will actually insist on a court-martial in such circumstances.

Usually, a court-martial takes the form of a trial with a presiding judge, a prosecutor and defensive counsel (all trained lawyers as well as officers) and (in some cases) a panel of officers (and sometimes enlisted personnel) acting as jury. The precise format varies from one country to another and may also depend on the severity of the accusation.

Courts martial have the authority to try a wide range of military offences, many of which closely resemble civilian crimes like fraud, theft or perjury. Others, like cowardice, desertion, and insubordination, are purely military crimes. Military offences are defined in the Army Act, Royal Air Force Act and Royal Navy Act for members of the British Military. Regulations for the Canadian Forces are found in the Queen's Regulations and Orders as well as the National Defence Act. For members of the United States armed forces offenses are covered under the Uniform Code of Military Justice (UCMJ). These offences, their corresponding punishments and instructions on how to conduct a court-martial, are explained in detail based on each country and/or service.

In Canada, there is a two-tier military trial system. Summary trials are presided over by superior officers, while more significant matters are heard by courts martial, which are presided over by independent military judges serving under the independent Office of the Chief Military Judge. Appeals are heard by the Court Martial Appeal Court of Canada. Capital punishment in Canada was abolished generally in 1976, and for military offences in 1998. Harold Pringle was the last Canadian soldier executed, in 1945, for a military offence.[2]

In the Netherlands members of the military are tried by a special military section of the civilian court in Arnhem. This section consists of a military member and two civilian judges. The decision whether or not to prosecute is primarily made by the (civilian) attorney general.[3]

Most commonly, courts-martial in the United States are convened to try members of the U.S. military for violations of the Uniform Code of Military Justice (or UCMJ), which is the U.S. military's criminal code. However, they can also be convened for other purposes, including military tribunals and the enforcement of martial law in an occupied territory. Courts-martial are governed by the rules of procedure and evidence laid out in the Manual for Courts-Martial, which contains the Rules for Courts-Martial, Military Rules of Evidence, and other guidance.