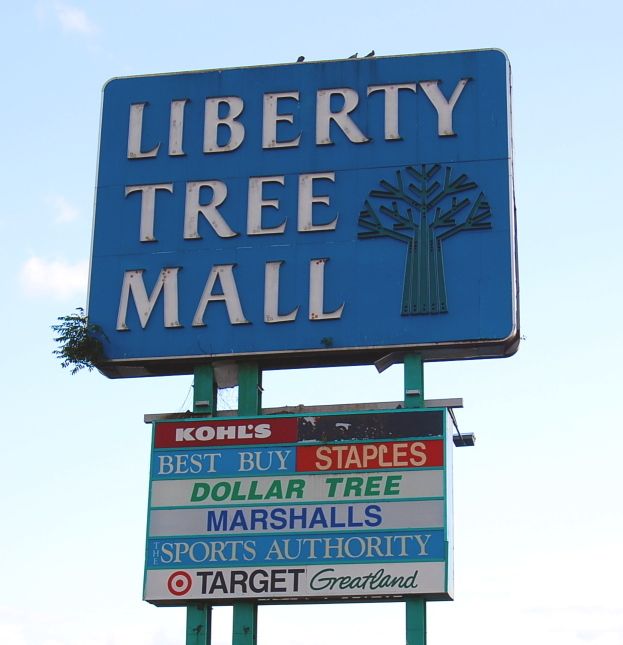 caption = Sign visible from Endicott Street and Route 128
location =
opening_date =
developer =
manager =
owner = and two corporate investors
number_of_stores =
number_of_anchors =
floor_area =
floors =
parking =
website = The Liberty Tree Mall is a in that is currently one-third owned by and managed by the . The Simon Property Group currently owns and manages only the common area of the mall between Kohl's and Best Buy. The right-hand area of the property from Best Buy to Staples is owned by Target, and the property from Kohl's to Dick's Sporting Goods is owned by New England Development.

The LTM was originally built in 1972, and was renovated and expanded in 1993. The mall has always been considered to be a competitor with the , which is less than a mile away in Peabody, although both malls are primarily owned and operated by Simon.

Ann & Hope, one of the former anchor stores of the mall, was opened in 1969 before the rest of the mall was completed. The name derives from the local version of Boston's , which stood less than a half mile east of the current location of the mall, just east of the new hospital building currently under construction. The tree has since died. In the early years of the mall, a large metal tree stood at the center court to commemorate the Liberty Tree.

In 1980, a food court was added that included restaurants such as The Roast House (formally a Subway) and The Fairgrounds, that served traditional carnival snacks. A was added during the 1980s, and has been in the mall since then. Marshalls is the only remaining original anchor store. There was also a dental office located to the right of Marshalls, which recently housed a Picture People (now closed). moved to the Northshore Mall in the 1990s and was located to the left of the former store. and were added after the 1993 food court hallway expansion.

Lechmere and Filene's Basement were anchor stores of the mall until 1997 when they were demolished and rebuilt into Target, Staples, , and in 1998/1999. An f.y.e. replaced part of an area of smaller stores, converting them into a music store/video arcade (formerly Tilt/Dream Machine). The fye has since closed the music store and, more recently, the arcade. Suncoast has also recently disappeared, a victim of consolidation by its parent company, Trans World Entertainment. Another group of smaller stores was converted to .

Ann & Hope closed its 211,300 square foot store in 2001 due to poor sales and was rebuilt into . , and were later built to the left of Kohl's. The mall also houses an AMC 20-screen movie theater, which is a main attraction of the mall. Galyan's Sporting Goods opened a megastore in the empty parking lot across from where Pier 1 Imports now sits. later bought the former Galyan's stores soon after it opened.

Across the parking lot is a smaller strip of stores. A housed there later became a , but closed in 2007 due to poor sales. In addition, KB Toys recently closed their store at the mall, as did Tello's, as well as a Subway restaurant in the food court. The former building located to the north of Staples was renovated and now houses a .