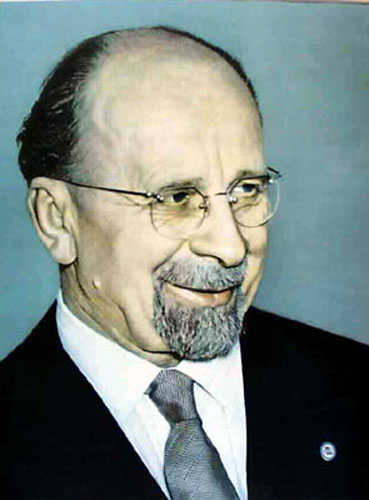 Walter Ulbricht (, &ndash; , ) was a German politician. As First Secretary of the Socialist Unity Party from 1950 to 1971, he played a leading role in the early development and establishment of the (East Germany).

Ulbricht was born in as the son of a tailor. He spent eight years in primary school ("Volksschule"), and learned the trade of a joiner. Both his parents worked actively for the Social Democratic Party (SPD), and Walter joined the party in 1912.

In the years before the 1933 seizure of power, there were frequent disturbances caused by the presence of paramilitary forces of left and right. Violence connected with demonstrations was common, with supporters of each side fighting each other and the police. In 1931 the Communists in Berlin decided on a policy of killing two police officers for every communist demonstrator killed by police, and as a result Walter Ulbricht urged fellow communists and to plan the murder of two Berlin police officers, Paul Anlauf and Franz Lenck. The killing was carried out by Erich Ziemer and Ulbricht's later chief of national security, . In 1932, the ordered the Communists to cooperate with the Nazis, so Ulbricht and , the propaganda chief of the Nazi Party, both urged their respective constituents to support a planned strike. The strikers were appalled by the scene of Nazis and Communists marching together and the strike was halted after five days. [Frank, Mario, "Walter Ulbricht. Eine Deutsche Biographie" (Berlin 2001) 88-89.]

The attained power in Germany in January 1933, and very quickly began a purge of Communist and Social Democrat leaders in Germany. Following the arrest of the KPD's leader, , Ulbricht campaigned to be Thälmann's replacement as head of the Party. Many competitors for the leadership were killed in the Soviet Union thanks to Ulbricht. [Frank, Mario, "Walter Ulbricht. Eine Deutsche Biographie" (Berlin 2001), 117-121. Frank only gives an example of Kippenberger. Other competitors were killed as well, but it is very likely the initiative of the , given the anti-German frenzy in the Soviet union at that time.]

Ulbricht lived in exile in and from 1933 to 1937. The German Popular Front under the leadership of in Paris was dissolved after a campaign of behind-the-scenes jockeying by Ulbricht to place the organization under the control of the Comintern. Ulbricht tried to persuade the KPD founder to go to the Soviet Union, allegedly so that Ulbricht could have "them take care of him". Münzenberg refused. He would have been in jeopardy of arrest and purge by the NKVD, a prospect in both Münzenberg's and Ulbricht's minds. [Frank, Mario, "Walter Ulbricht. Eine Deutsche Biographie" (Berlin 2001), 124-139.] Ulbricht spent some time in Spain during the Civil War, as a Comintern representative, ensuring the liquidation of Germans serving on the Republican side who were regarded as not sufficiently loyal to Stalin; some were sent to Moscow for trial, others were executed on the spot. [Robert Solomon Wistrich, "Who's Who in Nazi Germany", Routledge, 2001; John Fuegi, "Brecht and Company: Sex, Politics and the Making of the Modern Drama", Grove Press, 2002, p.354; Noel Annan, "Changing Enemies: The Defeat and Regeneration of Germany", Cornell University Press, 1997, p.176] Ulbricht lived in the Soviet Union from 1937 to 1945.

Following the German invasion of the Soviet Union in 1941, Ulbricht was active in a group of German communists under NKVD supervision (a group including, among others, the poet and the writer ) which, among other things, translated propaganda material into German, prepared broadcasts directed at the invaders, and interrogated captured German officers. In February 1943, following the surrender of the German Sixth Army at the close of the , Ulbricht, Weinert and conducted a Communist political rally in the center of Stalingrad which many German prisoners were forced to attend. The political pragmatist commented that Ulbricht was "the greatest idiot that he had ever seen." [Frank, Mario, "Walter Ulbricht. Eine Deutsche Biographie" (Berlin 2001), 241.]

Creation of the GDR

In April 1945 Ulbricht lead a group of party functionaries ("") into Germany to begin reconstruction of the German Communist party along orthodox Stalinist lines. Within the Soviet occupied zone of Germany, the Social Democrats and Communists united to form the Stalinist dominated ("Sozialistische Einheitspartei Deutschlands" or "SED"), and Ulbricht played a key role in this.

After the founding of the on , Ulbricht became Deputy Chairman "(Stellvertreter des Vorsitzenden)" of the Council of Ministers "( der DDR)" under Chairman . In 1950, he became of the SED ; this position was renamed "First Secretary" in 1953. After the death of his position was in danger for some time, because of his reputation as an archetypal . Ironically, he was saved by the Berlin Uprising of June 17, 1953, because the Soviet leadership feared that deposing Ulbricht might be construed as a sign of weakness.

At the third congress of the SED in 1950, Ulbricht announced a concentrating on the doubling of industrial production. As Stalin was at that point keeping open the option of a re-unified Germany, it was not until 1952 that the party moved towards the construction of a socialist society in East Germany. [Martin Kitchen, "A History Of Modern Germany 1800-2000", Blackwell, 2006, p.328]

By 1952, 80 percent of industry had been nationalised. Blindly following an outmoded Stalinist model of industrialisation - concentration on the development of heavy industry regardless of the cost, availability of raw materials, and economic suitability - produced an economy that was short of consumer goods, and those that were produced were often of shoddy quality. Growth was also hampered by a deliberate exclusion from the higher educational system of children of 'bourgeois' families. One consequence was the flight of large numbers of citizens to the West: over 360,000 in 1952 and the early part of 1953. [Martin Kitchen, "A History Of Modern Germany 1800-2000", Blackwell, 2006, p.329]

In 1957, Ulbricht arranged a visit to a East German collective farm at in order to demonstrate the GDR's modern agricultural industry to the visiting Soviet Politburo member . Following the death of in 1960, the SED abolished the function of President of the GDR and instead created a new institution, the " der DDR" (Council of State of the GDR), of which Ulbricht, as leader of the party, became Chairman and therefore . From this point until the early seventies, Ulbricht was the unquestioned leader of the party and the country.

Although modest economic gains were being made, emigration still continued. By 1961, 1.65 million had fled to the west. [Steven Ozment, "A Mighty Fortress", Granta, London, 2005 p.294, quoting Lothar Kettenacker, "Germany Since 1945" (Oxford, 1997), pp 18-20 and 50-51, and Hagen Shulze, "Modern Germany", p. 316] On , , work began on what was to become the , only two months after Ulbricht had emphatically denied that there were such plans ("Nobody has the intention of building a wall"). [In an interview with Annamarie Doherr, Berlin correspondent of the , 15 June 1961 [http://de.wikipedia.org/wiki/Annamarie_Doherr] ]

The 1968 invasion by Warsaw Pact troops of Czechoslovakia and the suppression of the were also applauded by Ulbricht - East German soldiers were among those massed on the border but did not cross over, probably due to Czech sensitivities about German troops on their soil - and earned him a reputation as a hard-line Stalinist.

From 1963, Ulbricht and his economic adviser attempted to create a more efficient economy through a ("Neues Ökonomisches System" or NÖS). This meant that under the centrally coordinated economic plan, a greater degree of local decision-making would be possible. The reason was not only to stimulate greater responsibility on the part of companies, but also the realization that decisions were sometimes better taken locally. One of Ulbricht's principles was the 'scientific' execution of politics and economy - making use of and but most of all the . The effects of the NÖS, which corrected mistakes made in the past, were largely positive, with growing economic efficiency.

The was not very popular within the party, however, and from 1965 onwards opposition grew, mainly under the direction of and with tacit support of Soviet leader . Ulbricht's preoccupation with science meant that more and more control of the economy was being relegated from the party to specialists. Also, Ulbricht's motivations were at odds with , which did not suit ideological hardliners within the Party.

Ulbricht's difficult relationship with Leonid Brezhnev proved to be his eventual undoing. On Ulbricht was forced to resign from virtually all of his public functions 'due to reasons of poor health' and was replaced - with the consent of the Soviets - by Erich Honecker. He was allowed to retain only the ceremonial position of Chairman of the Council of State "(Vorsitzender des s der DDR)". Additionally, the honorary position of 'Chairman of the SED' was created especially for him. Ulbricht died at a government in , north of , on , during the , having suffered a two weeks earlier. He was honoured with a and buried among other communists in the .

Ulbricht remained loyal to and principles throughout his life, rarely able or willing to make compromises. Inflexible and unlikeable ( described him as "widely loathed Stalinist bureaucrat well known for his tactics denouncing rivals" . [Anthony Beevor, "The fall of Berlin 1945", Penguin Books, London, 2003 p.418] ), he was an unlikely figure to attract much public affection or admiration. However, he also proved to be a shrewd and intelligent politician who knew how to get himself out of more than one difficult situation. Despite stabilising the GDR to some extent, he never succeeded in raising the standard of living in the country to a level comparable to that in the West.

In 1956, Ulbricht was awarded the Hans Beimler Medal, for veterans of the Spanish Civil War, which caused controversy among other recipients, who had actually served on the front line. [Josie McLellan, "Anti-Fascism and Memory in East Germany: Remembering the International Brigades, 1945-1989", p.67]

There are no biographies in English written after the fall of the GDR. Two have been published in German:
* Norbert Podewin, "Walter Ulbricht: Eine neue Biographie". (Berlin, 1995),
* Mario Frank, "Walter Ulbricht. Eine deutsche Biografie". 2000, Siedler-Verlag, ISBN 3-88680-720-7