Cranfield University is a British postgraduate university based on two campuses, with a research-oriented focus. The main campus is at Cranfield, Bedfordshire and the second is the Defence Academy of the United Kingdom based at Shrivenham, Oxfordshire. The main campus is unique in the United Kingdom for having its own operational airport (Cranfield Airport) next to the main campus. The facilities at the airport are used by Cranfield University's own aircraft in the course of aerospace teaching and research. The university also has connections in India and Australia.[5][6] 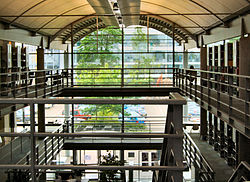 The new School, 'Cranfield Health' prior to official opening, May 2008, viewed from the Library

The university was formed in 1946 as the College of Aeronautics on the former Royal Air Force base of RAF Cranfield[7] which opened in 1937. (See also entries on Harold Roxbee Cox, Sir Stafford Cripps and Roy Fedden, all individuals associated with the foundation of the original College of Aeronautics). Between 1955 and 1969 a period of diversification took place. In 1967 the college presented the Privy Council with a petition for the grant of a Royal Charter along with a draft charter for a new institution to be called Cranfield Institute of Technology. The Cranfield Institute of Technology was incorporated by Royal Charter in 1969, giving the institution its own degree-awarding powers. 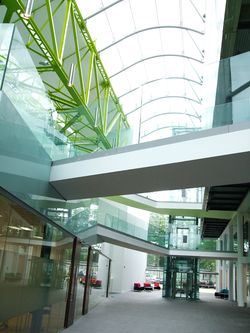 Since then the former National College of Agricultural Engineering established at Silsoe near Luton, Bedfordshire, in the 1960s, was incorporated. This was relocated to the Cranfield campus and closed for teaching in 2007.[8] An academic partnership with the Royal Military College of Science (RMCS) at Shrivenham was formed in 1984. RMCS, whose roots can be traced back to 1772, is now a part of the Defence Academy of the United Kingdom and now forms the Defence College of Management and Technology, known as 'DCMT' and from 2009 as "Cranfield Defence and Security". In 1993 a Royal Charter changed the institution's name to Cranfield University.

The first 50 year history of Cranfield University is described comprehensively, but concisely, by the book Field of Vision.[9]

In 2003, the then RMCS site admitted its last undergraduates.[10] In 2006, it was decided that activities on the Silsoe site would be relocated to the main campus at Cranfield. As a result, a substantial building program was undertaken on Cranfield campus, including the provision of departmental buildings and additional accommodation (Stringfellow and Chilver Halls), and Silsoe-based staff were transferred to Cranfield. 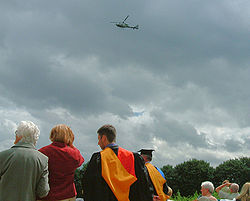 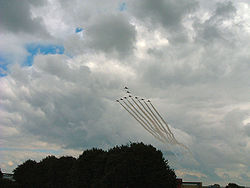 Cranfield campus is approximately 50 miles (80 km) north of central London and adjacent to the village of Cranfield,[11] Bedfordshire. The nearest main towns are Milton Keynes and Bedford, the centres of which are both about 8 miles (13 km) away. Cambridge is about 30 miles (48 km) east.

Shrivenham is about 55 miles (89 km) west of London, adjacent to Shrivenham village, 7 miles (11 km) from the centre of the nearest town, Swindon, and around 15 miles (24 km) from Oxford.

The five academic Schools are:

As the university is postgraduate, direct comparison with undergraduate institutions is difficult. Some key facts and figures are:

A number of prominent public figures have been awarded Honorary Graduate status including the following: 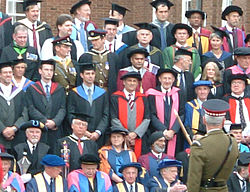 There are a number of companies located on the Cranfield University Technology Park ranging from large international companies to small start-ups. Major companies on the park include:

An extension to the Technology Park was completed in 2008. A new Aerospace Park on the north-eastern part of the campus is planned.