It is named after Sir Alfred Herbert, a Coventry industrialist and philanthropist whose benefactions enabled the original building to be opened in 1960. Building began in 1939, with an interruption by the Second World War, and The Herbert opened in 1960. In 2008 it reopened after a £20 million refurbishment.

Admission is free and The Herbert is run by a registered charity. It derives financial support from donations, sales at the museum shop, and hiring the buildings out.[1] In 2010, the museum and gallery received over 300,000 visitors, making it one of the most popular free tourist attractions in the West Midlands.

Museums in Coventry before the Herbert included the museum of the Coventry City Guild and the Benedictine Museum, opened by J B Shelton in the 1930s. However, Coventry City Council's collection of art treasures and museum pieces were housed in various buildings and so the council acquired a half acre site over a number of years costing £35,375. In 1938 the philanthropist Sir Alfred Herbert donated £100,000 to the Corporation to erect a Gallery and Museum on the site.[2] Plans were drawn up, and building began the following year.[3]

The city's destruction during the Coventry Blitz meant construction was suspended with only the basement completed. City architect Donald Gibson's radical rebuilding plan for Coventry city centre became War time propaganda for the post-war reconstruction of Britain. But, Post-war economies required Gibson to concentrate on a building programme for the suburbs. Completion of the first building under his plan was delayed until 1953.[4] 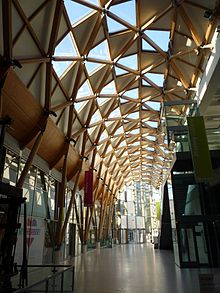 The covered court of the museum and art gallery in 2011.

The first phase of a two-phase refurbishment was completed in 2005 with £3 million of funds from Coventry City Council, Advantage West Midlands and the European Regional Development Fund.[3] During the refurbishment, it was considered that a painting by 17th-century artist Luca Giordano was too large and fragile to move. Instead the 3.02 by 5.83 metres (9.9 by 19.1 ft) canvas, which has been with The Herbert since the 1960s and described as one of the museum's most prized paintings, was boarded up in 2005 and uncovered three years later in time for the opening.[5]

In early 2008 the second phase was completed at a cost of £20 million. A new entrance on Bayley Lane was provided, along with a 500 sq metre glass-covered court extension. The extended buildings include a new café area, education, training, creative media and arts information facilities, additional gallery spaces for temporary exhibitions, and facilities for conservation work and to preserve the city records and archive.

In July 2008, management of The Herbert was transferred to Coventry Heritage and Arts Trust, a registered charity[6] which also administers two additional local heritage sites: the Priory Visitor Centre for the Mediaeval remains of Coventry's first cathedral, and the Lunt Roman Fort situated three miles outside Coventry at Baginton.

The museum won the Guardian Family Friendly Award 2010.[8] The same year, the gallery was shortlisted for the Art Fund Prize in recognition of its outstanding work in engaging new and diverse audiences.[9][10] 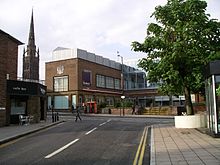 The Herbert from across Jordan Well

The museum's notable collections include a costume collection dating from around 1800 to date, with the emphasis on 19th century women's wear.[11] The museum is now concentrating on the acquisition of more modern clothes and items from different ethnic communities in Coventry.[11]

Another collection represents the city's history as a centre for ribbon making, which includes over 250 sample books, as well as woven Stevengraphs - a form of silk picture and bookmark -[12] plus dyer's samples, documents, woven badges and related machinery.[13]

The Heritage Lottery Fund granted nearly £200,000 to The Herbert and Wolverhampton Art Gallery in 2008 for acquisitions in relation to the theme of peace and reconciliation.[14][15]

In 2011 the museum raised £12,000 to buy The Coventry Album, a collection of paintings by William Henry Brooke in 1819. The album is one of the most important collection of historic pictures of Coventry.[16]

In 2005 The Herbert hosted a theatre project for children, showing them what it would have been like to be evacuees in the 1940s. The event won two awards, one for excellence in the field of heritage and the other for engaging children with history.[18][19]

In 2009 The Herbert hosted a collection of fifty watercolours from British artists such as J. M. W. Turner and Dante Gabriel Rossetti.[20]

In 2010, to celebrate the 50th anniversary of the museum's opening, the Herbert held several events throughout the year.[21] In March more than 1,000 people attended a special event where ten objects, including a 16th-century tapestry and Shakespeare's ring, illustrating the history of Warwickshire, were put on display.[22]

Herbert Media is the in-house media service at The Herbert, and it manages recording studios, video editing rooms and training rooms, and produces much of the audio and visual sequences for the museum's exhibitions and permanent displays.[23] It also coordinates 'community response' films to exhibitions within the gallery as a way of further connecting art to the community.

Herbert Media also specialises in making films and interactive materials for other museums and art galleries, and the service was rewarded for its high standard of work in the 2009 Godiva Awards, winning the Innovation in Business Practice category.[24]

The facilities available at The Herbert include a large hireable exhibition space called 'The Studio', which is frequently used by the public and organisations. There is also a 'New Media Suite', with modern IT facilities, the Herbert Media Recording Studio (which comprises live and control rooms) and a MIDI Suite. Further Herbert Media facilities include Standard Definition and High Definition video editing suites, a corporate training room, and an arts information centre with additional resources and a reference library.