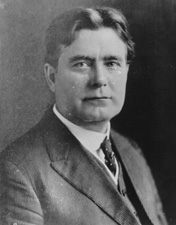 William Edgar Borah (, near Fairfield, &ndash; , ) was a prominent Republican and longtime from noted for his oratorical skills and isolationist views. One of his nicknames later in life was "The Lion of Idaho."

Borah's schooling included the Wayne County common schools and the Southern Illinois Academy at Enfield. He attended in 1885 but was forced to leave after contracting his freshman year. He studied law and was admitted to the bar in September 1887. After practicing law in , he relocated to , in 1890, where he became the most prominent attorney in the state. Borah ran for the United States Senate in 1902, but was defeated in the by .

In 1907, shortly after entering the Senate, Borah, as the prosecuting attorney, was pitted against in the nationally publicized trial of "Big Bill" Haywood and two other radical labor union officials for the 1905 murder of former Idaho Governor .

In 1906, the Idaho Legislature elected William Borah to the U.S. Senate over the controversial Democratic incumbent, . Borah was reelected by the Idaho Legislature in 1912, and four more times by popular vote (1918, 1924, 1930 and 1936). He remains the longest-serving member of the United States Congress in Idaho history.

A member of the from 1908 to 1912, he was a delegate to the . As a senator Borah was dedicated to principles rather than party loyalty, a trait which earned him the nickname "the Great Opposer." He disliked entangling alliances in foreign policy and became a prominent and nationalist, favoring a continued separation of American liberal and European Great Power politics. He encouraged the formation of a series of world economic conferences and favored a low .

In 1919 Borah and other Senate Republicans, notably of and Hiram W. Johnson of , clashed with President over Senate ratification of the ending and establishing the . Borah emerged as leader of the "Irreconcilables," a group of senators noted for their uncompromising opposition to the treaty and the League. During 1919 Borah and Johnson toured the country speaking against the treaty in response to Wilson's own speaking tour supporting it. Borah's impassioned November 19, 1919, speech on the Senate floor in opposition to the treaty and League of Nations was contributive to the Senate's ultimate rejection of it.

From 1925 to 1933, Borah served as the Chairman of the Senate Foreign Relations Committee. As Chairman, he became known for his pro-Soviet views, favoring recognition of the regime, and sometimes interceded with that government in an unofficial capacity during the period when Moscow had no official relations with the United States. Purportedly, Kremlin officials held Borah in such high esteem that American citizens could gain permission to travel throughout the Soviet Union with nothing more than a letter from the Senator.

Domestically, he sponsored bills that created the Department of Labor and the Children's Bureau. He was one of the Senators responsible for uncovering the scandals of the Harding Administration. In 1932, unhappy with the conservative policies of President in light of the , Borah refused to publicly endorse Hoover's reelection campaign.

After Hoover's defeat by Democrat , Borah, now the , supported certain components of the , such as old-age pensions and the confiscation of US citizen's gold by executive order, but opposed others, including the and the .

Borah was a progressive Republican who often had strong differences of opinion with the conservative wing of the party. Borah also had a reputation for being headstrong. When conservative President was told of Borah's fondness for horseback riding, the president is said to have replied, "It's hard to imagine Senator Borah going in the same direction as his horse."

Conservative Republicans in Idaho, notably Governor and later Senator , often feuded with Borah as well. Nevertheless, Borah became a strong political force in Idaho and elsewhere often in spite of opposition from his own party. After his death, Borah was linked by Gore Vidal as the father of 's child, but at that time Vidal did not not give much data in support of his assertion.

Wallace E. Olson, then president of the American Institute of Certified Public Accountants in mocking the United States income tax system and rates reported on the debates held in Congress that,

A fear expressed by a number of opponents was that the proposed law, with its low rates was the camel's nose under the tent that once a tax on incomes was enacted, rates would tend to rise. Sen. William E. Borah of Idaho was outraged by such anxieties, and derided a suggestion that the rate might eventually climb as high as 20 percent. Who, he asked, could impose such socialistic, confiscatory rates? Only Congress. And how could Congress, the Representatives of the American People, be so lacking in fairness, justice and patriotism? -- "Wall Street Journal," October 5, 1973. Page 8 at columns 4-6.

In 1932 Borah strongly disagreed with the suggestion of the drafters of the of 1933, who met in Geneva, that the United States should settle intergovernmental debts as a step to recover from the Great Depression. [The World Economic Conference, Herbert Samuel, "International Affairs (Royal Institute of International Affairs" 1931-1939), Vol. 12, No. 4. (Jul., 1933) 445.]

In an attempt to revitalize the progressive wing of the Republican Party, in 1936 a 71-year-old Borah ran for , becoming the first Idahoan to do so. Borah's candidacy was opposed by the conservative Republican leadership and dismissed by Roosevelt. He managed to win only a handful of delegates. Borah won a majority of delegates in only one state, , where he had the endorsement of Progressive United States Senator Borah refused to endorse the eventual Republican nominee, , leading some to believe he might cross party lines and support Roosevelt's reelection. As he had four years earlier, ultimately he chose to support neither candidate.

Despite his failed presidential run, throughout his long career Borah remained personally popular among Idaho voters. While in the Senate in Idaho he never faced a serious political challenge from either the Republicans or Democrats. After abandoning his presidential campaign, later in 1936 at the height of Democratic power during the New Deal era, Borah ran for reelection against three-term Idaho Governor , a Roosevelt ally, and won with well over 60 percent of the vote.

Borah conducted a long-time affair with , the daughter of and the wife of fellow politician . He was long rumored to be the biological father of Alice Longworth's only child, , who was born nearly 20 years into her parents' marriage. Alice Roosevelt's diaries were made available to her biographer, historian Stacy A. Cordery, who found and published Alice's own admission of Borah's paternity.

Known for his public integrity, eloquent speaking ability, and genuine concern for his constituents, William E. Borah died in Washington, D.C., on , of a at the age of 74. He is buried in Morris Hill Cemetery in Boise. [ [http://www.cityofboise.org/parks/caring/cemetery/index.aspx?id=mh_walking_tour#Borah Cemetery Walking Tour: William E. Borah] , published by City of Boise. Accessed May 15, 2008.

The quote has been repeatedly cited as evidence of the alleged naivete of a belief in the power of pure diplomacy. Conservative commentator has referred to the quote in at least three of his columns, making an analogy to negotiating with in 1989, with in 1994 and with in 2006. [ [http://www.time.com/time/nation/article/0,8599,1515951,00.html "Why the Nazi Analogy Is on the Rise"] , , "", August 31, 2006] In August 2006 referred to the quote when decrying those who want to "negotiate a separate peace with terrorists". [ [http://www.defenselink.mil/Speeches/Speech.aspx?SpeechID=1033 Address at the 88th Annual American Legion National Convention] , , August 29, 2006]

On , U.S. President referred to the quote in a speech to the in commemorating that nation's 60th anniversary, after stating, "some seem to believe that we should negotiate with the terrorists and radicals, as if some ingenious argument will persuade them they have been wrong all along." Some, including himself, interpreted Bush's comment to be a criticism of Obama for his stated willingness to negotiate with the leaders of . White House staff stated that the reference was meant more as a criticism of former president , who has argued that the U.S. should be willing to meet with .

*"No more fatuous chimera has ever infested the brain than that you can control opinions by law or direct belief by statute, and no more pernicious sentiment ever tormented the heart than the barbarous desire to do so. The field of inquiry should remain open, and the right of debate must be regarded as a sacred right." —1917 [ [http://quotes.liberty-tree.ca/quote/william_borah_quote_8f1d William E. Borah Quote/Quotation ] at quotes.liberty-tree.ca]

*"America has arisen to a position where she is respected and admired by the entire world. She did it by minding her own business... the European and American systems do not agree." —1919 speech in opposing the League of Nations. [ [http://www.senate.gov/artandhistory/history/common/generic/Speeches_Borah_League.htm U.S. Senate: Art & History Home > Classic Senate Speeches ] ]