Ottawa Fire Service (OFS) protects the lives, property and environment of the people who live, work and visit the City of Ottawa. Service personnel are highly trained to respond to a wide variety of emergency and non-emergency incidents including fires, rescues and medical and hazardous-material emergencies. The department's headquarters is located on Carling Ave.

Like most North American fire departments, the Ottawa Fire Service is organized in a paramilitary fashion. The current Chief of the department is John deHooge. Serving Under deHooge are three Deputy Chiefs, four Platoon Chiefs, five Division Chiefs, four Rural Sector Chiefs and twenty District Chiefs. At the station level, each station has a Captain for each of the four platoons. Each truck in the fleet is under the command of either a Captain or Lieutenant.

There are 44 fire stations located across Ottawa, including 16 Paid On-Call stations and 5 composite stations, making the OFS the largest composite fire department in Canada. The stations are assigned to 9 district operations units. On Friday September 3rd, 2010, Chief deHooge announced that a three year trial testing the use of 24 hour shift rotations would begin in January 2011. In Canada twelve of the fifteen largest fire departments are using the 24 hour shift rotation.

At amalgamation, the newly formed OFS purchased 20 brand new HME pumpers to begin the process of building a uniform fleet of vehicles. Along with the purchase of the new vehicles, the OFS inherited most of the pre-amalgamation vehicles from the 9 former departments. The current strength of the OFS fleet stands at 96 vehicles, not including chief's vehicles. Apparatus are identified by a letter to identify the vehicle type, followed by a number to identify the station, for example; P13. The various types of apparatus in service include: 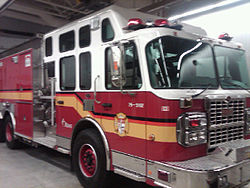 The history of the Ottawa Fire Department includes several notable incidents, including the 1900 Hull–Ottawa fire