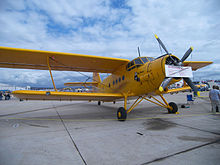 Private An-2 at the Miramar Airshow

The An-2 is used as a light utility transport, parachute drop aircraft, agricultural work and many other tasks suited to this large slow-flying biplane. Its slow flight and good field performance make it suited for short, unimproved fields, and some specialized variants have also been built for cold weather and other extreme environments. The Guinness Book of World Records states that the 45-year production run for the An-2 was for a time the longest ever, for any aircraft, but it was recently exceeded by the Lockheed C-130 Hercules.[1]

The Antonov An-2 was designed to meet a 1947 Soviet Ministry of Forestry requirement for a replacement for the Polikarpov Po-2, which was used in large numbers in both agricultural and utility roles. Antonov designed a large single bay biplane of all-metal construction, with an enclosed cockpit and a cabin with room for seats accommodating twelve passengers. The first prototype, designated SKh-1, and powered by a Shvetsov ASh-21 radial engine, flew on 31 August 1947. The second prototype was fitted with a more powerful Shvetsov ASh-62 engine, which allowed the aircraft's payload to be significantly increased from 1,300 kg (2,870 lb) to 2,140 kg (4,720 lb), and in this form it was ordered into production.[6]

By 1960 the USSR had produced over 5,000 units. Since 1960, most An-2s have been built at Poland's WSK factory in Mielec, with over 13,000 made there before full production ended in 1991. Limited production from parts stocks, as well as spares and maintenance coverage continued until 2001, when 4 aircraft were produced for Vietnam.[7] China also builds the An-2 under license as the Shijiazhuang Y-5.[1]

The An-2 was designed as a utility aircraft for use in forestry and agriculture. However, the basic airframe is highly adaptable and numerous variants have been developed. These include hopper-equipped versions for crop-dusting, scientific versions for atmospheric sampling, water-bombers for fighting forest-fires, flying ambulances, float-equipped seaplane versions, lightly armed combat versions for dropping paratroops, and of course the most common An-2T version, which is the 12-seater passenger aircraft. All versions (other than the An-3) are powered by a 750 kW (1,000 hp) nine-cylinder Shvetsov ASh-62 radial engine, which was developed from the Wright R-1820.[1]

An-2 on skis at Volosovo air field, Moscow region

An-2 at Grand Junction aviation show.

The An-2 has design features which make it suitable for operation in remote areas with unsurfaced airstrips: 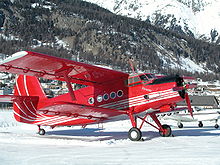 A note from the pilot's handbook reads: "If the engine quits in instrument conditions (blind flying when you can't see the ground) or at night, the pilot should pull the control column full aft (it won't stall) and keep the wings level. The leading-edge slats will snap out at about 64 km/h (40 mph), and when the airplane slows to a forward speed of about 40 km/h (25 mph), the airplane will sink at about a parachute descent rate until the aircraft hits the ground." [1]

The An-2 indeed has no stall speed quoted in the operating handbook. Pilots of the An-2 say one can fly the aircraft in full control at 30 mph (as a contrast, a modern Cessna four-seater light aircraft has a stall speed of around 55 mph). This slow stall speed makes it possible for the aircraft to fly backwards (if the aircraft is pointed into a headwind of, say, 35 mph (56 km/h), it will travel backwards at 5 mph (8.0 km/h) whilst under full control). (This is also possible with almost any other true Short Take Off and Landing (STOL) aircraft, but the Antonov has the distinction of being able to do the trick in the mildest headwind.)[1] 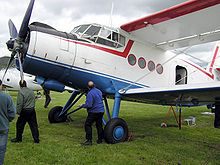 Closeup on a private An-2 (Type unknown)

Since the collapse of the Soviet Union and the Eastern European communist states, most airlines in these areas have been withdrawing their An-2s from service, as some of these aircraft are now over 40 years old. Private operators are still using the planes, as their stability, capacity and slow-flying ability make them very popular, for instance for skydiving.[1]

In the early 1980s Antonov experimented with a development of the An-2 powered by a modern turboprop engine. The unit used was a 1,450 horsepower (1,080 kW) Glushenkov engine, and aircraft fitted with this engine were fitted with a longer, more streamlined nose to accommodate it. See Antonov An-3 article for more information.[1]

Whilst their high noise levels, increasing maintenance costs, high fuel consumption and unsophisticated nature (the pre-flight checks alone take between 30 and 40 minutes) make them obsolete for commercial service in Europe, the huge number of aircraft available means that prices are low (from as little as $30,000 for a serviceable example). This makes them ideal for the developing world, where their ability to carry large loads into short airstrips makes them assets to airlines on a budget. Many ex-Aeroflot An-2s work as regional airliners in Africa, Central and South America, Cuba and the Indian subcontinent.[1]

Ukrainian Hryvna depicting the An-2 airplane

North Korea has a number of the aircraft with[8] wooden propellers and canvas wings on their variants (the Y-5 version license-built in China) giving them a low radar cross-section, and therefore a limited degree of "stealth".[9] In a war they could possibly be used to parachute or deliver special forces troops behind enemy lines for sabotage operations.[1]

The An-2's ability, looks and flying characteristics, and its falsely claimed status as "The World's Biggest single-engined production Biplane"[clarification needed] mean that demand for the aircraft is increasing in the United States and Western Europe, where they are prized by collectors of classic aircraft, making the An-2 an increasingly common sight at airshows.[citation needed] However, in nearly all Western nations (the USA, Canada, the United Kingdom, France, Germany, etc.) one may not use the An-2 commercially (despite its obvious potential as a bush plane and parachute aircraft). This is because the aircraft has not been certified by the relevant national aviation authorities, which limits its use. These restrictions vary by country, but all prevent the An-2 being used for any 'for profit' purpose, with the exception of the United States, where An-2s imported since 1993 are limited to flights within 300 miles (480 km) of their home airport, and may only land at that same airfield, but PZL-built An-2s are exempt from this restriction due to a bilateral agreement with Poland.[1]

The An-2 was used by combat services in the Korean War. During the 1960s an An-2 attempting to engage South Vietnamese naval units was shot down by an F-4 Phantom II under the control of an Air Intercept Controller (AIC) on the USS Long Beach. The An-2 was used also during the Vietnam War as a naval interceptor. This modification had two "Skvall" torpedoes under the wing[citation needed] and was difficult to detect due to its low-altitude flight. Even when detected it was difficult to intercept because the plane's cruise speed was 135–160 km/h (well below the landing speed of jet aircraft during the war).[1]

On January 12, 1968, a clandestine TACAN site (call sign: Lima Site 85/Phou Pha Ti) installed by Special Forces (United States Army) in Northern Laos for directing USAF warplanes flying from Thailand to Vietnam was attacked by two North Vietnamese An-2s using machine guns fired from the cabin, rockets, and hand thrown grenades. Another Colt orbited overhead. An Air America Bell UH-1B, XW-PHF, resupplying the site chased the two attacking aircraft. By using an AK-47 the American crew (Ted Moore Captain, Glen Wood kicker) succeeded in shooting down one of the An-2s while the second aircraft was forced down by combined ground and air fire and crashed into a mountain. The surviving Antonov returned to its home base, Gia Lam, near Hanoi.[10]

During the Croatian War of Independence in 1991, a few old Antonov An-2 biplanes used for crop-spraying were converted by the Croatian Air Force to drop makeshift bombs and were used in supply missions to the town of Vukovar and other besieged parts of Croatia.[11] The chief advantage for the An-2 was that they could take off and land in small or improvised airstrips. They were also used to drop supplies by parachute on isolated garrisons. At least one was shot down on 2 December 1991 over Vinkovci, eastern Slavonia, by Serbian SAM missiles, purportedly SA-6s.[12]

Cockpit of a 1971 ex-Aeroflot An-2 at the Historic Aircraft Restoration Museum. See also [1] for a very high resolution image of this cockpit.

In addition to Aeroflot, the Soviet Air Force, and other Eastern Bloc military forces including Vietnam People's Air Force (VPAF), dozens of nations and airlines have employed the An-2 in civil and military roles. In recent years, it has also gained popularity in the USA and Canada as a bushplane. 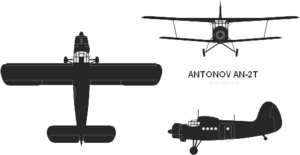 As of October 06, 2011 there has been 387 hull-loss accidents of An-2, claiming the total of 365 human lives.[13] One of the most recent accidents occurred around noon on September 3, 2011 in Vinnytsia Oblast, Ukraine, where an Antonov An-2 was dusting crops and hit a treetop with its chassis while taking off after refueling. The plane tumbled down and hit the ground, bursting into flames, killing its 60 years old pilot.[14][15]