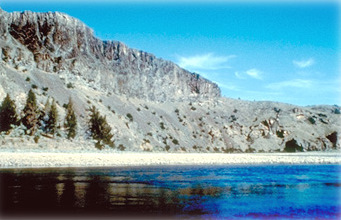 The John Day River is a tributary of the , approximately convert|281|mi|km|0 long, in northeastern in the . Undammed along its entire length, the river is the second longest free-flowing river in the conterminous United States. There is extensive use of its waters for . Its free-flowing course furnishes habitat for diverse species, including wild steelhead runs. However, the steelhead populations are under federal protections, and have been proposed for ESA protection.

The river was named for John Day, a member of the , an overland expedition to the mouth of the that left from in 1810. Day wandered lost through this part of Oregon in the winter of 1811&ndash;12.

Through its tributaries, the river drains much of the western side of the Blue Mountains, flowing across the sparsely populated arid part of the state east of the in a northwest zigzag, then entering the Columbia upstream from the . It flows through exceptionally scenic canyons in its upper course, with several significant paleontological sites along its banks.

The main branch of the John Day River rises in the in eastern Grant County, and the four main forks each have their heads in different parts of the . The main fork flows initially north, then west through the John Day Valley and through the city of John Day. At Dayville in western Grant County it is joined from the south by the , then flows north through Picture Gorge and past the Sheep Rock Unit of the .

At Kimberly in northwestern Grant County, it is joined from the east by the (which had already joined with the above Monument, Grant County, Oregon). The river then flows west across Wheeler County. At the county line with Jefferson County it flows north, past the Clarno Unit of the John Day Fossil Beds National Monument. As it approaches the Columbia River in north-central Oregon it flows in an increasingly ing course, forming the boundary between Sherman County to the west and Gilliam County to the east.

The John Day is navigable by rafts and other small river craft. Its lower course is used for irrigation of cropland and ranching. In 1988, the designated convert|147.5|mi|km|1 of the river from to Tumwater Falls as the John Day Wild and Scenic River, as part of the program. The segment of the river is a popular destination for anadromous steelhead and warm water bass fishing, as well as .

In addition to wild spring and bass, the river furnishes habitat for , , and . There are no hatchery salmon or released in the John Day River.