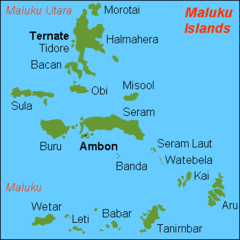 Bacan (formerly Bachan, Bachian or Batchian, Dutch: Batjan) refers to a group of islands in the Maluku Islands of Indonesia and to that group's largest island. The islands are mountainous and forested. The islands lie south of Ternate and west of Halmahera's southernmost arm. Bacan itself is the largest; the second and third largest islands are Kasiruta and Mandioli. There are dozens of smaller islands in the group.

Part of North Maluku province, the Bacan kecamatan (sub-district) includes abut 56,000 people of which about 8,000 live in the capital Labuha.

In 1513, the first Portuguese trading fleet to reach Maluku set up a trading post on Bacan which at the time was subservient to the Sultan of Ternate. The fleet's commander, Captain Antonio de Miranda Azevedo, left seven men on Bacan to buy cloves for the following year's expedition. Their arrogant behaviour and reported bad treatment of Bacan women led to their murder. As Ternate did not have enough stock, the ship for which the men had stayed to prepare was used by the Sultan of Ternate to fill Ferdinand Magellan's last ship, which was the first ship to circumnavigate the world. A slave and two birds of paradise were given to the ship by Bacan. Bacan became a place of refuge for rebellious Ternateans. The Portuguese sent a punitive expedition against Bacan but it failed, and instead the Portuguese Governor Galvão challenged Bacan's sultan to a duel to determine who was to be subservient to whom. The challenge was accepted but the duel never took place.[1]

In 1557, Father Antonio Vaz converted Bacan's sultan and court members to Catholicism. The king subsequently married Sultan Hairun of Ternate who had also become a Catholic. Ternate invaded in 1578 and the king apostatized. A community of Christians remained and were later joined by correligionists from Tobelo and Ambon. A small Roman Catholic hospital was built by an elderly Dutch nun. Today, Protestants significantly outnumber Catholics. During the mid-19th century Maluku travels of British naturalist Alfred Russell Wallace, Christians in Maluku were called "Orang Sirani" and were thought to have been descended from the Portuguese. They had dressed in white and black and Wallace reports they dance "quadrilles, waltzes, polkas, and mazurkas with great vigour and much skill".[1]

Following the 1578 Ternatean invasion, Bacan appears to have become subservient to Ternate. The wife of Sultan Said of Ternate was provided by Bacan. A Spanish fort was built in 1606. Once the Dutch established hegemony in the 17th century, the Netherlands' power on Bacan was based in Fort Barnaveld.[1]

In 1705, the sergeant in charge of the fort and the sultan captured the English explorer William Dampier, seized his ship, looted its cargo, and threatened all aboard with execution. It is thought that this was in response to Dampier violating the trade monopoly. When the sergeant's Dutch superiors heard of the incident, Dampier was released, his ship restored and the English provided with sumptuous hospitality in Ternate.[2]

Ternate and Bacan were the only places in late nineteenth century North Maluku that had a Dutch curriculum school and a Protestant Minister. The majority of Bacan's Roman Catholics became Protestants during the Dutch colonial period. In the late 1990s, 193 of Bacan's 7,700 Christians were Protestants.[3]

Bacan's sultan lost much of his power with the arrival of European colonialists, and what remained was lost with Indonesian independence after World War II.[3]

Colonial interest in Bacan was primarily driven by the spice trade, which was flourishing in Ternate, Tidore, and Halmahera. The island of Bacan was not particularly sought after for its own resources, but rather, to assist control of the more valuable islands nearby. The Dutch East India Company paid a stipend to the Bacan sultan as compensation for the destruction of Bacan's clove trees that was higher than the salary of the Dutch Governor on Ternate and about 1/9 of that paid to the Sultan of Ternate.

It is thought that gold was washed on Bacan since at least 1774; in the mid-nineteenth century, 20 skilled Chinese gold workers were brought from west Borneo but a gold rush did not eventuate. An attempt was made to establish mining on the island, whereby the Dutch brought in Japanese convicts to extract coal. However, following the delivery of several tons the grade of coal was deemed poor and the mining was discontinued.

From 1882, an Amsterdam merchant created plantations of vanilla, coffee, tobacco and potatoes, however, his land was unsuitable and the crops succumbed to floods, drought, rot, insects and rodents. Despite over ten years of large investments of capital, creditors forced him out of business in 1900 although they also did not succeed with the plantations.[2] The indigenous economy included the gathering of pearl and mother-of-pearl, and the gathering the resin from dammar.

Bacan has more recently been in the news due to violence between Christian and Muslim inhabitants of the island.

The interior of the island is relatively uninhabited and none of the dwellers on the coast are indigenous. They consist of the Sirani (Christian descendants of the Portuguese), of Malays, Papuans, and immigrants from other islands. The total number of inhabitants is about 13,000. The most significant town on the island is the Bacan sub-district capital Labuha, situated on the west side of the island. Nearby is the town of Amasing (or Amasingkota), once a significant settlement on the island.

Several Austronesian and non-Austronesian languages are spoken on Bacan, including Tobelo, Galela, Ternate, Bajau, and Tukang Besi. However, the indigenous language of Bacan is Bacanese, also known as Bacan Malay (ISO 639-3 btj. There is some debate as to whether Bacanese is a Malay variety or a Malay-based creole.

Some Bacan words occurs in Wiltens & Danckaerts' 1623 vocabulary. Bacan is also reviewed in Adriani & Kruijt's 1914 monograph. The most detailed studies are by James T. Collins, who concludes that Bacan is indeed a Malay variety, descended from the Malay used in the Bacan Sultanate.

The island is of irregular form, consisting of two distinct mountainous parts, united by a low isthmus, which a slight subsidence would submerge. The total land area is around 1,900 km². The island is in part of volcanic formation, and the existence of hot springs points to volcanic activity. There are, however, especially in the southern portion, ancient and non-volcanic rocks. The highest elevation occurs at the south of the island, the mountain of Labua reaching 6,950 ft. Coal and other minerals have been discovered. A large portion of the island is richly wooded, and sago, coconuts and cloves (which are indigenous) are abundantly produced.

Bacan is of interest to zoologists as the most eastern point on the globe inhabited by any of the Quadrumana, a black ape occurring here as in the Moluccas. The island is very rich in birds and insects. Bacan (along with Halmahera)is home for the world's largest bee, the giant mason bee, Chalicodoma pluto.