A zebroid (also zedonk, zebra mule, and zebrule) is the offspring of any cross between a zebra and any other equine: essentially, a zebra hybrid. In most cases, the sire is a zebra stallion. Offspring of a donkey sire and zebra dam, called a zebra hinny, or donkra, do exist but are rare. Zebroids have been bred since the 19th century. The extinct quagga was also crossed with horses and donkeys. Charles Darwin noted several zebra hybrids in his works.

Zebroid is the generic name for all zebra hybrids. The different hybrids are generally named using the portmanteau convention of sire's name + dam's name. There is generally no distinction made as to which zebra species is used. Many times when zebras are crossbred, they develop some form of dwarfism. Breeding of different branches of the equine family, which does not occur in the wild, generally results in infertile offspring. The combination of sire and dam also affects the offspring.

A zorse is the offspring of a male zebra and a female horse. This cross is also called a zebrula, zebrule, zebra mule or golden zebra. The rarer reverse pairing is sometimes called a horbra, hebra, zebrinny or zebret. Like most other animal hybrids, the zorse is sterile.[1]

A zony is the offspring of a zebra stallion and a pony mare. Medium-sized pony mares are preferred to produce riding zonies, but zebras have been crossed with smaller pony breeds such as the Shetland, resulting in so-called "Zetlands".[2] 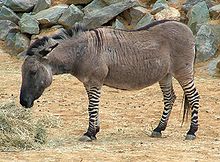 A zonkey is a cross between a zebra and a donkey. "Zonkey" is not the technically correct name for such a cross. The most commonly accepted terms are zebonkey (or zebronkey), zebrinny, zebrula, zebrass, and zedonk (or zeedonk). Another name that is sometimes used is "zebadonk". Donkeys are closely related to zebras and both animals belong to the horse family. Zonkeys are very rare.[3] In South Africa, they occur where zebras and donkeys are found in proximity to each other. Like mules, however, they are generally genetically unable to breed, due to an odd number of chromosomes disrupting meiosis.

Donkeys and wild equids have different numbers of chromosomes. A donkey has 62 chromosomes; the zebra has between 32 and 46 (depending on species). In spite of this difference, viable hybrids are possible, provided the gene combination in the hybrid allows for embryonic development to birth. A hybrid has a number of chromosomes somewhere in between. The chromosome difference makes female hybrids poorly fertile and male hybrids generally sterile due to a phenomenon called Haldane's Rule. The difference in chromosome number is most likely due to horses having two longer chromosomes that contain similar gene content to four zebra chromosomes.[4] Horses have 64 chromosomes, while most zebroids end up with 54 chromosomes.

Common wisdom states that hybrids only occur when the zebra is the sire, but the Barbados hybrid demonstrates otherwise. Two other known zebra hinnies have been foaled, but did not survive to adulthood. The rarity of zebra hinnies indicates the smaller number of chromosomes must generally be on the male side if a viable hybrid is to be produced. Before this comes into account, a successful mating needs to be accomplished in the first place. As courtship in horses involves the mare kicking at the stallion's head for some time before allowing him to mount, and as this behavior is stronger in wild equids than in domestic horses, it is difficult enough to get a horse stallion to mate and not be put off by the rough behavior of the non-horse mare.

Zonkeys are interspecific hybrids bred by mating two species from within the same genus. The offspring have traits and characteristics of both parents. Zonkeys vary considerably depending on how the genes from each parent are expressed and how they interact.

Zebroids physically resemble their nonzebra parent, but are striped like a zebra. The stripes generally do not cover the whole body, and might be confined to the legs or spread onto parts of the body or neck. If the nonzebra parent was patterned (such as a roan, Appaloosa, Pinto horse, paint, piebald, or skewbald), this pattern might be passed down to the zebroid, in which case the stripes are usually confined to nonwhite areas. The alternative name golden zebra relates to the interaction of zebra striping and a horse's bay or chestnut colour to give a zebra-like black-on-bay or black-on-chestnut pattern that superficially resembles the quagga. In zebra-donkey hybrids, there is usually a dorsal (back) stripe and a ventral (belly) stripe. 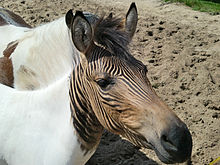 Zorses combine the zebra striping overlaid on colored areas of the hybrid's coat. Zorses are most often bred using solid color horses. If the horse parent is piebald (black and white) or skewbald (other color and white) (these are known in the United States as pinto), the zorse may inherit the dominant depigmentation genes for white patches, it is understood that tobiano (the most common white modifier found in the horse) directly interacts with the zorse coat to give the white markings. Only the nondepigmented areas will have zebra striping, resulting in a zorse with white patches and striped patches. This effect is seen in the zebroid Eclyse (a hebra rather than a zorse) born in Stukenbrock, Germany in 2007 to a zebra mare called Eclipse and a stallion called Ulysses.

Zebroids are preferred over zebra for practical uses, such as riding, because the zebra has a different body shape from a horse or donkey, and consequently it is difficult to find tack to fit a zebra. However, a zebroid is usually more inclined to be temperamental than a purebred horse and can be difficult to handle. Zebras, being wild animals, and not domesticated like horses and donkeys, pass on their wild animal traits to their offspring. Zebras, while not usually very large, are extremely strong and aggressive. Similarly, zorses have a strong temperament and can be aggressive. 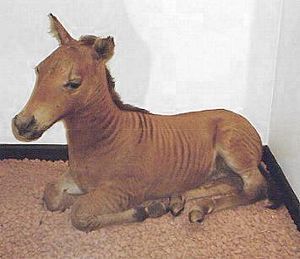 In 1815, Lord Morton mated a quagga stallion to a chestnut Arabian mare. The result was a female hybrid which resembled both parents. This provoked the interest of Cossar Ewart, Professor of Natural History at Edinburgh (1882–1927) and a keen geneticist. Ewart crossed a zebra stallion with pony mares to investigate the theory of telegony, or paternal impression. In Origin of Species (1859), Charles Darwin mentioned four coloured drawings of hybrids between the ass and zebra. He also wrote "In Lord Morton's famous hybrid from a chestnut mare and male quagga, the hybrid, and even the pure offspring subsequently produced from the mare by a black Arabian sire, were much more plainly barred across the legs than is even the pure quagga." In his book The Variation of Animals and Plants under Domestication, Darwin described a hybrid ass-zebra specimen in the British Museum as being dappled on its flanks. He also mentioned a "triple hybrid, from a bay mare, by a hybrid from a male ass and female zebra" displayed at London Zoo. This would have required the zebroid sire to be fertile.

During the South African War, the Boers crossed the Chapman's zebra with the pony, to produce an animal for transport work, chiefly for hauling guns. A specimen was captured by British forces and presented to King Edward VII by Lord Kitchener, and was photographed by W S Berridge.[5] Zebras are resistant to sleeping sickness, whereas purebred horses and ponies are not, and it was hoped that the zebra mules would inherit this resistance.

Grevy's zebra has been crossed with the Somali ass in the early 20th century.

Zorses were bred by the US Government and reported in Genetics in Relation to Agriculture by E. B. Babcock and R. E. Clausen (early 20th century), in an attempt to investigate inheritance and telegony. The experiments were also reported in The Science of Life by H G Wells, J Huxley and G P Wells (c. 1929).

The 1970s continued the interest in zebra crosses. A New York Times article from 16 June 1973 mentioned the birth of a cross between a zebra and a donkey at the Jerusalem Zoo. They called it a "hamzab." In the 1970s, the Colchester Zoo in England bred zedonks, at first by accident and later to create a disease-resistant riding and draft animal. The experiment was discontinued when zoos became more conservation-minded. A number of hybrids were kept at the zoo after this; the last died in 2009.[6] One adult and a foal remain at the tourist attraction of Groombridge Place [7] near Tonbridge in Kent.

Today, various zebroids are bred as riding and draft animals, and as curiosities in circuses and smaller zoos. Zorses are bred in Africa and used for trekking on Mount Kenya;[8] the zebra parent gives resistance to the nagana pest disease. A zorse (more accurately a zony) was born at Eden Ostrich World, Cumbria, England in 2001 after a zebra was left in a field with a Shetland pony. It was referred to as a Zetland. Usually, a zebra stallion is paired with a horse mare or ass mare, but in 2005, a Burchell's zebra named Allison produced a zonkey called Alex sired by a donkey at Highland plantation in the parish of Saint Thomas, Barbados. Alex, born 21 April 2005, is apparently the first zonkey in Barbados.[9] In 2007, a stallion, Ulysses, and a zebra mare, Eclipse, produced a zebroid named Eclyse, displaying an unusually patchy color coating.[10][11] The Wild Animal Safari in Springfield, MO, and its sister location in Pine Mountain, GA has several zedonks as of March 31, 2010.[citation needed] In July 2010, a zedonk was born at the Chestatee Wildlife Preserve in Dahlonega, Georgia.[12] Another zebra–donkey hybrid, like the Barbados zonkey sired by a donkey, was born July 3, 2011 in Haicang Safari Park, Haicang, Xiamen, China.[13]

Zorses have appeared in several TV shows and movies. In the Viva La Bam episode Groundhogs Day in the final race, Brandon Dicamillo's sled is a zorse. It was colored pink, blue, purple and red and on the 'uncommentary' on the DVD seasons of 'Viva La Bam', Tim Glomb says "If you send me a list of all the episodes where the zorse is I'll give you a dollar". Also, the 2007 movie I'm Reed Fish features a zorse named Zabrina. In the movie Racing Stripes, an animated zorse appears in the alternate ending. It is the son of Stripes (a zebra) and Sandy, a grey Arabian mare. Zorses have also appeared in books. They are briefly mentioned several times in George R.R. Martin's A Song of Ice and Fire series of fantasy novels. Sutton Coleman wrote a sonnet about zorses and published it in his 2007 book, "Ligers, Tigons, and Zorses, Oh My!" In Roald Dahl's book Going Solo, he and several other characters speculate on how nice it would be to own a zorse, although they admit it would be difficult to train.