Operational Requirement F.155 was a specification issued by the British Ministry of Supply for an interceptor aircraft to defend the United Kingdom from high-flying supersonic bombers.

Although a nuclear threat from Soviet nuclear-armed bombers was identified as early as in 1955, F.155 calling for supersonic interceptors (in service by 1962) was superseded by the 1957 Defence White Paper.[clarification needed] The paper was a major review of military spending and one of its elements was the cancellation of nearly all manned fighter projects as a radical change had occurred in strategic threats with the expectation that intercontinental ballistic missiles and low-level strike would replace high flying bombers. 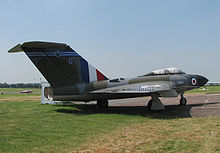 Gloster Javelin all-weather fighter in service at the time.

During the early 1950s, the RAF's front line defence was converting from Gloster Meteor to Gloster Javelin all-weather fighters with the anticipation of new interceptors coming into service in the near-future. These included the English Electric Lightning (point defence interceptor) and Saunders-Roe SR.177 interceptors in development. While the Lightning embodied largely conventional jet engine technology, the SR.177 was a "mixed" rocket/jet design that used rocket power for delivering high speed and maximum altitude performance. Due to the length of design and development, for the interim the RAF also considered purchase of the Canadian Avro CF-105 Arrow projected to be operational by 1961.

The Ministry of Supply made clear in the requirement that the plane and missiles should be treated as a "weapon system" i.e., a cohesive whole. The armament specifications were covered by a separate Operational Requirement: OR.1131. Two missiles were identified in OR.1131:

A smaller version of Red Hebe would eventually also come into the equation. Blue Vesta was a 150 kg infra-red guided weapon for attack from a pursuit angle. The Blue Vesta was largely displaced by the development of Blue Jay Mark 4 (which would enter service as Red Top). Red Hebe was nearly 600 kg but being radar guided, it would be able to hit its target from any firing angle including a collision course intercept.

Most British manufacturers provided their own suggestions for planes that would meet the specification. At the same time the engine manufacturers were encouraged to develop the necessary powerplants. These included the de Havilland Gyron and Rolls-Royce RB.106.

Saunders-Roe came up with the P.187: a logical progression from the SR.53 and SR.177 mixed power (rocket and jet engines) interceptors. This gave both rapid acceleration and the capability to operate at high altitudes where jets would be inefficient due to the thin air. Saunders-Roe judged that a big aircraft would be needed to carry 2 IR and 2 radar-guided missiles and the fuel required. A highly streamlined futuristic-looking design (using a droop-nose) it would have been powered by 2 PS.52 jets, a projected development of the Gyron giving 35,000 lb (155.6 kN) of thrust, and 4 Spectre rockets, giving a speed of Mach 2.5 at 76,000 ft (23,165 m). It was judged, at 98,000 lb (3 times the weight of the SR.177) and 84 ft long (26 m), as too big.

Fairey drew on their experience with the Fairey Delta 2 (FD2). Their first proposal was a single-engined fighter development of the existing FD2, which was felt to have good export potential although it did not meet the RAF criteria laid down in O.R. F.155. A larger twin-engined design tailored to the operational requirement followed on from this, which became known simply as the "Delta III". A fighter-bomber derivative of this aircraft was also envisaged, with Bristol Olympus 21R engines coupled with a large ventral drop tank giving a much-improved radius of action at low altitude.[citation needed]Fairey, like some of the other manufacturers, felt that carrying 4 missiles was too onerous especially given the size of the radar guided Red Hebe and provided designs based on a payload of only two missiles. They also took the mixed power route for both the FD2 based and the new 'FD3' designs, with both making provision for the fitting of de Havilland rocket engines.

Going on the basis of the smallest aircraft that could do the job, Hawker's design (the P1103) used a single, albeit powerful, engine - a 25,000 lb (111.1 kN) development of the Gyron. Alternative engines in the form of the Rolls-Royce RB.122, Armstrong-Siddeley P.173 and the Canadian Orenda PS.13 were also options. Two detachable rocket boosters, to give a 3.7 minute boost, were carried in midwing nacelles.

Armstrong-Whitworth put forward their AW.169. A razor-thin straight wing carried the engines in nacelles - two Gyron Juniors each side - with a rocket booster under the long narrow fuselage. Two missiles were carried, one on each wingtip.[1] 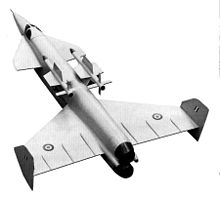 Vickers-Armstrong submitted the Type 559; an unorthodox canard design with a massive chin air intake, split vertically, for two reheated Gyron engines to 1.950k (placed as in the English Electric Lightning, one above the other). Two Spectre Junior rockets were situated each side of the jets at wing level. Two Red Hebe or Blue Jay missiles were mounted alongside the upper part of the fuselage between the canard and the mainplane, which had end-plates incorporating twin rudders.

The AW.169 and Fairey's Delta III design were considered to be the best two contenders taking into account the design of the aircraft, the development risks, the capabilities of the design teams and the manufacturers' workloads - Bristol had not been invited to tender because of the importance of the Bristol 188 high speed research plane they were working on. Initially further work was contracted on both designs but by the end of the year the AW.169 was dropped and the Fairey design become a firm choice. However, in April, the following year, the 1957 Defence White Paper terminated nearly all manned fighter development projects.