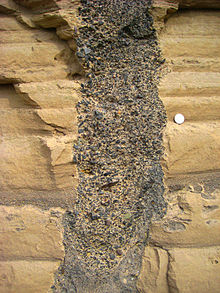 A clastic dike is a seam of sedimentary material that fills a crack in and cuts across sedimentary strata. Clastic dikes form rapidly by fluidized injection (mobilization of pressurized pore fluids) or passively by water, wind, and gravity (sediment swept into open cracks). Diagenesis may play a role in the formation of some dikes.[1] Clastic dikes are commonly vertical or near-vertical. Centimetre-scale widths are common, but thicknesses range from millimetres to metres. Length is usually many times width.

An incredible variety of dikes is found in the geologic record. However, clastic dikes are typically produced by seismic disturbance and liquefaction of high water content sediments. Examples of this type are many.[8][9][10] Clastic dikes are paleoseismic indicators in certain geologic settings.[11][12] Several qualitative, field-based systems have been developed to help distinguish seismites[13] from soft sediment deformation features [14][15] formed by non-seismic processes.[16][17][18][19][20][21][22]

Results from analytical modeling of clastic dike injection in soft Pleistocene-age rocks of the Ami'az Plain, Israel[23] indicate propagation occurred at a rate of approximately 4 to 65 m/sec at driving pressures of 1-2 MPa. Emplacement duration (<2 sec) appears similar to the speed with which acoustic energy (pressure waves) moves through young, partially-lithified sedimentary rock. 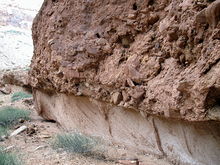 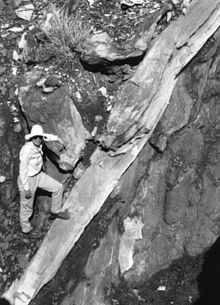 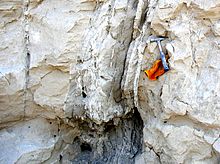 Tens of thousands of unusual clastic dikes (1 mm—350 cm wide) in Pleistocene sediments of southeastern Washington may be related to loading by outburst floods. Saturated material was injected along and enlarged preexisting weaknesses (shallow frost or desiccation cracks, joints in bedrock). Other lines of evidence suggest that these dikes may have formed when the flood-deposited Touchet Formation dried, leaving deep, open cracks which subsequently filled with debris. That would mean they are desiccation features — cracks formed as wet sediment dried and contracted. If desiccation features, the dikes would have formed by passive infilling of open fractures by windblown or washed in sediment over time. Some evidence suggests the dikes are fossil ice wedge casts or features related to the melting of buried ice. There is good proxy evidence for cold-climate conditions (periglacial or nearly so) at the time of their formation. The origin of the clastic dikes in the Columbia Basin is under debate.