Kett's Rebellion was a revolt in Norfolk, England during the reign of Edward VI. The rebellion was in response to the enclosure of land. It began in July 1549 but was eventually crushed by forces loyal to the English crown.

The rebellion was led by Robert Kett (or Ket) of Wymondham, Norfolk. He was a former tanner who had become the owner of the manor of Wymondham. After his capture he was tortured, then hanged slowly over a number of days at Norwich Castle as an example to the populace.

The town of Wymondham illegally celebrated the life of Saint Thomas Becket on the weekend of 6 July 1549. It was here that the anger of the townspeople turned to violence. They started ripping down enclosures in the nearby village of Morley St. Botolph before proceeding onto John Flowerdew's estate at Hethersett. Flowerdew bribed the people into ripping down enclosure belonging to Robert Kett (b. 1492). But the bribe backfired when Kett himself joined with the mob and helped them tear down his own fences before leading them to Flowerdew's house where they ripped down his fences. 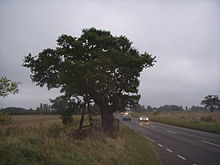 Kett's Oak, beside the B1172, near Hethersett, Norfolk

By 9 July, Kett had led the men to the city of Norwich. The mayor at the time was so scared by the rebellion that he attempted to bribe the men with money and a promise of pardon, which the rebels squarely rejected, forcing the mayor back within the city walls.

On 11 July, Kett set up a base on Mousehold Heath, just outside Norwich. People from all around the area, including Norwich itself, joined Kett on the Heath such that their numbers amounted to around 15,000. Morale was so high amongst Kett's men that they rejected further bribes of money, liquor and official pardons, all the while ripping down enclosures around the city. The camp was administered from the landmark Oak of Reformation, a large tree at the base of Mousehold Heath. The area has now become a car park near Kett's Hill in Norwich[citation needed]. On 19 July, Lord Sheffield was murdered - apparently by Kett's men - in Norwich, in a street near the Cathedral Close. After a couple of weeks on Mousehold Heath, food became scarce and morale was weakening. Therefore on 22 July,[1] Kett led the men to an attack on Norwich, apparently with pitchforks, sticks and mud. After much struggle, the rebels entered Norwich, congregated in the area now known as the present day marketplace, and effectively assumed temporary control of the city.

Attacks on the rebels

The King first sent William Parr, 1st Marquess of Northampton with 1,500 men to quash the rebellion. Because of Parr's poor experience in battle, however, this attack failed. John Dudley, Earl of Warwick was then sent with a stronger army of around 14,000 men including mercenaries from Wales, Germany and Spain. Warwick had previously fought in France, was a former member of the House of Commons, and subsequently the Privy Council, making him a strong leader. Despite the increased threat, the rebels were loyal to Kett throughout and continued to fight Warwick's men. They fought well against an overwhelming army, and led the battle out of the city onto Dussingdale, one of the dales leading out of Mousehold Heath.

The actual location of Dussindale has never been established. The most popular theory is that the dale began in the vicinity of the Plumstead Road East allotments that swept into Valley Drive and into the present remnant of Mousehold, into the Long Valley and out into what is now Gertrude Road and the allotments. In Victorian times this area was known as 'Ketts Meadow'. Dussindale has also been used as the name given to a recent housing development in nearby Thorpe St Andrew, which appears to have also used a number of names from the Civil War as road names.

End of the rebellion

Kett fled during the battle to a nearby town, where he was found a couple of days later. Several other ringleaders were hanged at the Oak of Reformation. Robert Kett and his brother William were taken to Norwich Castle where they were tortured. Eventually they were taken to the Tower of London, where they were convicted of High Treason. On the 7 December 1549, Robert Kett was taken back to Norwich Castle and hanged over the side, his death being purposefully prolonged over days as an example to the people of the city. William Kett was hanged over the side of Wymondham Abbey in a similar manner.

Kett's demands to the King