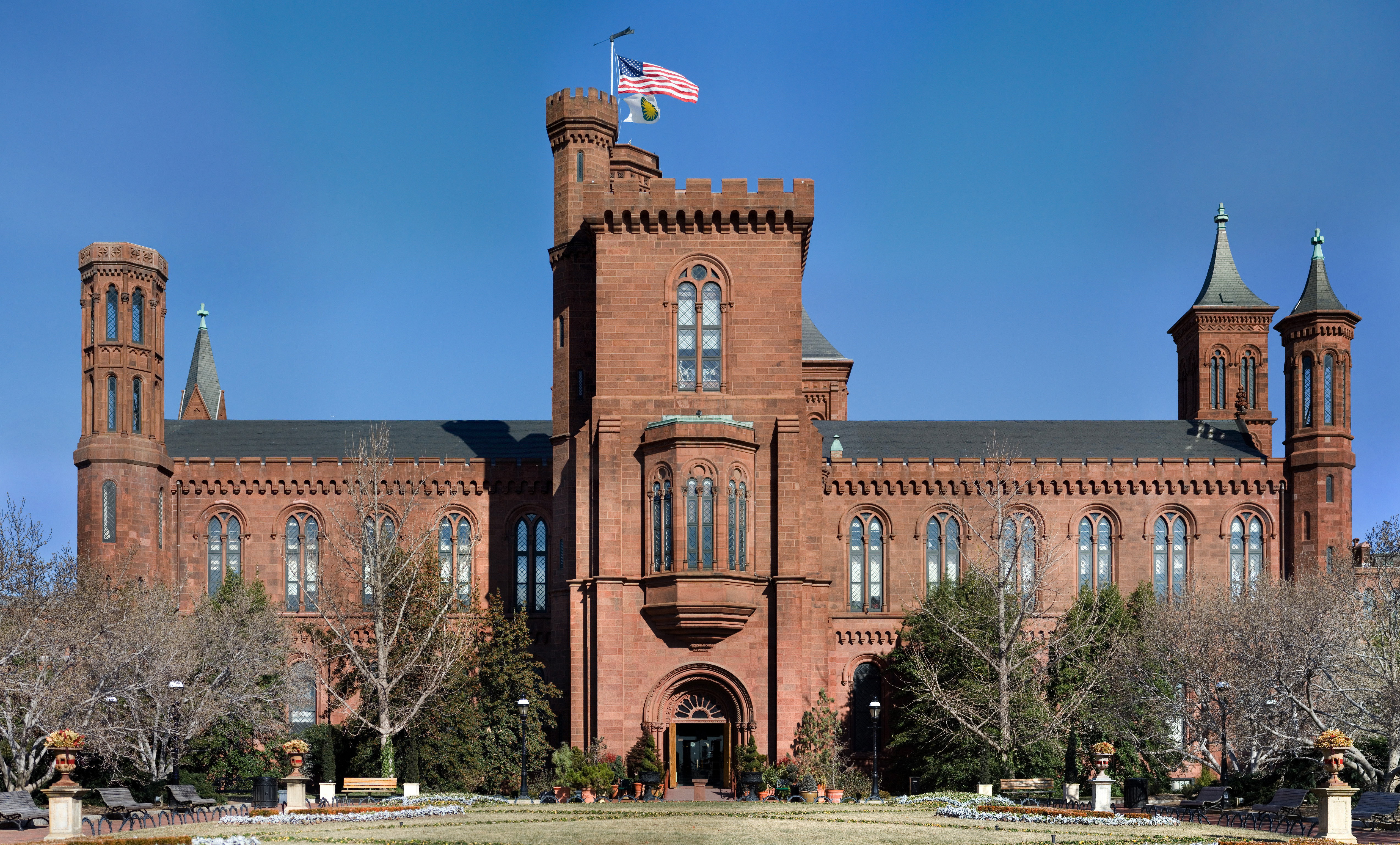 caption = The Castle
location=
lat_degrees = 38
lat_minutes = 53
lat_seconds = 18.92
lat_direction = N
long_degrees = 77
long_minutes = 1
long_seconds = 35.01
long_direction = W
area =
built =1855
architect=
designated= ,
added = ,
governing_body =
refnum=66000867 The Smithsonian Institution Building, located on the in behind the , houses the 's administrative offices and information center. The building is constructed of red in the faux Norman style (a 12th-century combination of late Romanesque and early Gothic motifs) and is appropriately nicknamed The Castle.

It was the first Smithsonian building, begun in 1847 by architect , whose other works include St. Patrick's Cathedral in and the Smithsonian's , also in Washington D.C. In August 1853, the Smithsonian's Board of Regents declared that the work of the original architect, James Renwick, Jr., was done. Lieutenant of the Topographic Engineers was asked to take up the architect's responsibilities for the slowly progressing Smithsonian Building. Under his supervision, the building was finished in 1855. [Field, Cynthia R. "Smithsonian Preservation Quarterly", "Director's Column: The Second Architect of the Smithsonian Building." Fall 1994 edition. Washington, D.C.] Over the years, several reconstructions have taken place. The first followed a disastrous fire on , which destroyed most of the upper story of the main segment and the north and south towers. In , the east wing was fireproofed and enlarged to accommodate more offices. Remodeling from 1968 to 1969 restored the building to the Victorian atmosphere reminiscent of the era during which it was first inhabited.

This building served as a home for the first Secretary of the Smithsonian, , and his family and for many years housed all aspects of Smithsonian operations, including an exhibit hall from 1858 until the 1960s. In 1901, Washington's first children's room was installed in the Castle's South Tower Room where the original decorated ceiling and wall stencils were restored in 1987. Located inside near the north entrance is the crypt of , benefactor of the Institution, while outside on the Mall, a bronze statue of Joseph Henry, executed by , honors the scientist who was the Institution's first secretary. In 1996, as the Smithsonian celebrated its 150th anniversary, a bell was added. Although Renwick had intended for a bell in his original plan, there was not enough money to add it to the Castle. It now chimes hourly.

The Smithsonian Castle acts as the 'brain' of the Smithsonian, in that it houses all the administrative offices and carries out all Smithsonian operations. In addition, the main Smithsonian visitor center is also located here, with interactive displays and maps. Computers electronically answer most common questions.