Derby Carriage and Wagon Works was built by the Midland Railway in Derby, England. The plant has been through many changes of ownership and is currently owned by Bombardier Transportation, a subsidiary of Bombardier Inc. of Canada. As of 2011 it is the only remaining passenger rolling stock manufacturer in the UK.[1]

Railway building began at Derby Works in 1840, when the North Midland Railway, the Midland Counties Railway and the Birmingham and Derby Railway set up engine sheds as part of their Tri Junct Station. When the three merged in 1844 to form the Midland Railway its first Locomotive and Carriage Superintendent Matthew Kirtley set out to organise their activities and persuaded the directors to build their own rolling stock, rather than buying it in. (see Derby Works)

By the 1860s the works had expanded to such an extent, that he was considering reorganising it and, in 1873, it separated into the Midland Railway Locomotive Works, known locally as "The Loco" and a new Derby Carriage and Wagon Works, further south, off Litchurch Lane, locally known as the "Carriage and Wagon". This was completed by his successor Samuel W. Johnson, under the control of Thomas Gethin Clayton[2]

The carriages of the time were less than fifty feet long but, possibly because the Midland had just taken delivery of its first Pullman car, 56 feet 5 inches long, Clayton had the foresight to design the works to deal with vehicles up to seventy feet. This meant, for instance, that the traversers at the end of each shed were still in use a century later.

Production began in 1873 of carriages from kits supplied by the Pullman Company of Detroit in America. These were followed by Clayton's own design of 54-foot-long (16 m) coaches, which incorporated both first- and third-class accommodation, and ran on four- or six-wheeled bogies. [3] Initially claret or dark red, with dark green locomotives, the livery of both was changed to the well-known crimson in 1883. Five layers of undercoat were used, followed by a top coat and three coats of varnish.

A six-wheeled coach built in 1885 is in the National Railway Museum. In 1879 the first bogie coaches were built for the Midland's line to Glasgow over its newly-opened Settle-Carlisle line. Clayton's successor in 1903 was David Bain., the works building sleeping cars and dining coaches. In 1904 two steam motor-carriages were fitted out for the Morecambe-Heysham service.

Ten- and twelve-ton wagons were produced in quantity, starting with a set of components in the morning, each would be assembled for painting by the end of the day. Reid and E.J.H.Lemon studied American mass production methods and introduced them around 1919, raising output to 200 wagons and 10 coaches a week. The sawmill was recognised as the most modern and largest in Europe, with over 2000 miles of timber being seasoned, of nearly sixty different varieties, from pine to lignum vitae.

In 1914 the works turned to producing supplies for the army of World War I, building ambulance trains and army wagons, plus parts for rifles.

In 1923 the Midland Railway became part of the London, Midland and Scottish Railway, and W.R.Reid was appointed Carriage & Wagon Superintendent. Together with the LNWR's Wolverton works, new coaches were built to the Midland design, corridor coaches with doors to each compartment - the so-called "all-doors". These were still in use until nearly 1960, particularly on the Liverpool and Newcastle to Bristol expresses.

Around 1929 the compartment doors, however, were replaced by two fixed lights, and later with single large windows. All-wood construction gave way to steel panels. In the next decade the Works Superintendent, Ernest Pugson, realised the potential of the new technology of metallic arc welding, replacing many forged and cast components. He introduced the first composite welded steel/timber bodies with standardised jig-built components. The first open carriages, referred to as "vestibule coaches", also appeared. From 1933, roofs were of steel rather than wood, with a simplified livery and a smoother external appearance, and, at the end of the 1930's all-welded steel vehicles were built for the Liverpool and Southport electric service, the Class 502.

During World War II, Derby pioneered aeroplane wing production methods, by 1945 having produced over 4000. With the loco works, wings and fuselages were repaired and sent to a private contractor at Nottingham for assembly, initially of Hampden bombers but later of other aircraft including Lancasters.

Although, towards the end of the 'thirties a complete 'Coronation Scot' train was built for an exhibition tour in America and a streamlined all-welded three coach railcar, most of the all-steel carriages were made by outside manufacturers. After the war, the LMS began to produce its own, the so-called "porthole" stock with round windows to the lavatory compartment. After nationalisation in 1948, as the main carriage works of the London Midland Region, the first Mk I all-steel carriages were produced. 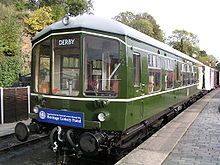 In the early 1950s a railway carriage could be seen gliding along, apparently by itself, on the Wirksworth Branch out of Duffield. (The present Ecclesbourne Valley line).

In 1953, Derby was chosen to build the first diesel multiple units, of all-aluminium construction, the so-called "Derby Lightweights". This also included the introduction of glass fibre laminate for the roof ends.

Trailer cars were also built for the London Transport Executive as replacements on the London Underground Piccadilly Line. In 1956, all-steel railcars, the "Derby Heavyweights" were introduced, with over a thousand being built in that decade.

From 1958 a new class of Derby Lightweight was produced in quantity, the Class 108. A number of steel bodied Class 107 units was built in 1960 for lines in Scotland. 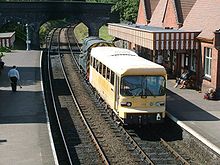 In 1962 the works was renamed as Derby Litchurch Lane Works. Wagon building and repairs ended, with a major re-organisation of the carriage and railcar work, and in 1979 container production finished.

In 1984, British Rail was under extreme financial pressure to close branch lines. At the same time a worldwide need was seen for a low-cost rail vehicle. The Research Division and British Leyland together produced a lightweight four wheeled vehicle which they referred to as LEV-1. After proving trials, which included assessment on the Boston and Maine Railroad in America it was put into service as the Class 140 which led to a series of two car "Pacer" units, and around 150 of various classes were built. 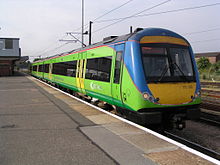 One of the first orders in 1993 was for Class 482 electric trains for the Waterloo and City Line. In 1995 a number of electric Class 325 parcels trains were built. However, this period was characterised by large contracts and rushes of work, interspersed with periods of relative idleness and layoffs.[citation needed] The works kept going by refurbishing ex-Southern Region slam-door stock.[citation needed] 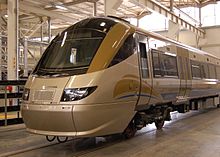 In 1997 a contract was received to supply a new class of vehicle, the Class 168 "Clubman", which led to the various "Turbostar" diesel and "Electrostar" electric multiple units, now the most widely used trains in Britain. Export orders included Electrostars for Gautrain in South Africa, some delivered complete and some in kit form for assembly in South Africa.[5] In 2009 Bombardier received a contract to build 30 new Class 379 trains for National Express services including Stansted Express.[6]

As of 2011, Bombardier's Derby plant was the only remaining specialist passenger rolling stock manufacturer in the UK,[1] until such a time as Hitachi constructs a planned assembly plant at Newton Aycliffe.[8] After Siemens was named preferred bidder in June 2011 to construct the new rolling stock for Thameslink services through London,[9] Bombardier announced it was to cut 1,400 out of the 3,000 jobs at Derby.[10][11] Colin Walton, Chairman of Bombardier Transportation in the UK, said the loss of the contract had forced the company to review its UK operations.[12], while Francis Paonessa, President of Bombardier's UK Passengers Division said the Thameslink contract would have secured a workload at Derby, and its loss meant it was inevitable that Bombardier "must adjust capacity in line with economic reality".[7]