A black dog is the name given to a being found primarily in the folklores of the British Isles. The black dog is essentially a nocturnal apparition, often said to be associated with the Devil, and its appearance was regarded as a portent of death. It is generally supposed to be larger than a normal dog, and often has large, glowing eyes.[1] It is often associated with electrical storms (such as Black Shuck's appearance at Bungay, Suffolk),[2] and also with crossroads, places of execution and ancient pathways.[1][3][4]

The origins of the black dog are difficult to discern. It is impossible to ascertain whether the creature originated in the Celtic or Germanic elements in British culture. Throughout European mythology, dogs have been associated with death. Examples of this are the Cŵn Annwn,[5] Garmr[6] and Cerberus,[7] all of whom were in some way guardians of the underworld. This association seems to be due to the scavenging habits of dogs.[8] It is possible that the black dog is a survival of these beliefs. Black dogs are almost universally regarded as malevolent, and a few (such as the Barghest) are said to be directly harmful. Some, however, like the Gurt Dog in Somerset and the Black Dog of the Hanging Hills in Connecticut, are said to behave benevolently. 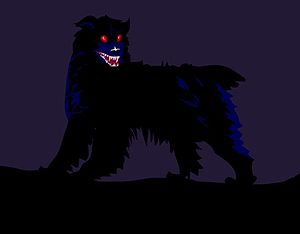 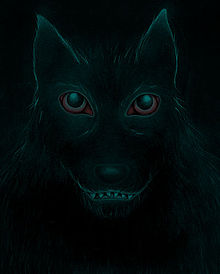 Black Dogs have been reported from almost all the counties of England, the exceptions being Middlesex and Rutland.[10]

The yeth hound, also called the yell hound is a Black dog found in Devon folklore. According to Brewer's Dictionary of Phrase and Fable, the yeth hound is a headless dog, said to be the spirit of an unbaptised child, which rambles through the woods at night making wailing noises. The yeth hound is also mentioned in The Denham Tracts. It is the inspiration for the ghost dog in The Hound of the Baskervilles by Arthur Conan Doyle. In this story it was described as "an enormous coal-black hound, but not such a hound as mortal eyes have ever seen" - with fire in his eyes and breath (Hausman 1997:47).[23]

Channel Islands and Isle of Man

"For he was speechless, ghastly, wan
Like him of whom the Story ran
Who spoke the spectre hound in Man." 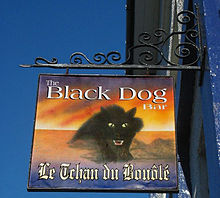