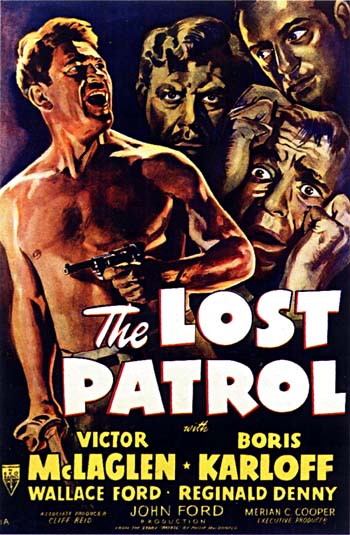 "The Lost Patrol" is a 1934 made by RKO. It was directed and produced by , with as executive producer and as associate producer. The was by , adapted by from the novel "Patrol" by . The music score was by and the cinematography by . The film is a of a 1929 British film, directed and written by and based on the same novel.

The film starred , , , Reginald Denny, , and Alan Hale. received a nomination for the .

During , the commanding officer of a small British patrol in the n desert is shot and killed by an unseen Arab sniper, leaving the Sergeant () at a loss, since he had not been informed what their mission was. He decides to try to rejoin the , even though he does not know where they are or where he is.

Eventually, the eleven men reach an . During the night, one of the sentries is killed, the other seriously wounded, and all their horses are stolen, leaving them stranded. One by one, the remaining men are picked off by the unseen enemy. In desperation, the Sergeant sends two men chosen by lot on foot for help, but they are caught and tortured to death, before their bodies are sent back. The pilot of a British spots the survivors, but nonchalantly lands nearby and is killed before he can be warned. Sanders (), a religious fanatic, goes mad.

In the end, only the Sergeant is left. When the Arabs finally show themselves, he manages to kill them all with the machine gun he took from the airplane. Then another British patrol shows up.