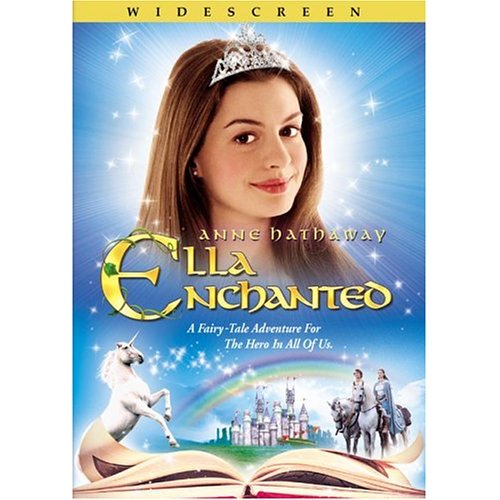 "Ella Enchanted" is a and the screen adaptation of 's 1997 novel of the same name but with an entirely different story. The film stars Anne Hathaway as Ella and as Prince Charmont. It was released to n theatres on , (see ).

Shortly after her birth, Ella's (Anne) mother dies and she is left with her father who, in need of money, remarries a wealthy socialite. His greedy, expedient new wife, Dame Olga, () and her two spoiled daughters Hattie () and Olive () treat Ella poorly and when they find out about her gift they start using her and try to make her life a misery and ruin it. Hattie takes malicious joy in Ella's suffering.

Ella cannot bear to live under the obedience spell and Hattie's jealousy a moment longer, so she resolves to find Lucinda () to remove the spell. Mandy (), the household fairy, introduces Benny, her boyfriend, to Ella. Mandy had accidentally turned Benny into a book, but he can help Ella by showing her where Lucinda is and only that.

During her journey, Ella encounters an named Slannen (), who wants to be a lawyer instead of the kingdom-required role for elves of entertainer. Slannen joins Ella on her quest to find Lucinda, but run into trouble with a group of s. They tie up Ella's hands and feet and prepare to lower her into their pot. Just when they are about to be devoured, they are rescued by Prince Charmont (), the heir to the kingdom of Frell, who is openly infatuated with Ella. He accompanies her to a wedding in the land of giants, where Ella hopes to find Lucinda. At the wedding, Ella is forced to perform a rendition of Queen's "Somebody to Love". After the wedding, Prince Charmont recommends that Ella visits the Hall of Records to track down Lucinda and so that she can find her faster. As they make their way to the palace, Prince Charmont and Ella fall in love.

At the palace, Ella's "gift" is brought to the attention of Sir Edgar (a non-existent character in the book; played by ), the Prince's uncle and the regent of Frell until Char's coronation. Ella's stepsisters explain that she does everything she is told and he orders her to stab Prince Charmont when they are alone and not to tell anyone of the plan. Sir Edgar reveals that he was the murderer of Prince Charmont's father (Charmont's father was not dead in the book). To prevent the murder, Ella asks Slannen to tie her to a tree outside the city and to find the giants in order to help them.

In somewhat of a predicament, Lucinda appears before Ella and she asks the fairy to undo the gift of obedience. Offended by her request, Lucinda says that she cannot take it back and that if she no longer wants the spell, she must find a way to remove it herself. To make matters worse, she unties Ella from the tree after giving her a fancy dress to attend the ball in. When Ella gets to the ball, Charmont immediately takes her to the Hall of Mirrors and asks her to marry him at midnight. She is about to stab him with the dagger, when she frees herself from the curse by shouting "You will no longer be obedient!" into a mirror, which is reflected back to her. Since she has to obey whatever orders she hears, she obeys and thus is no longer obedient. This saves Prince Charmont from his uncle's treachery.

Charmont believes she tried to kill him, and Edgar (who was watching the entire scene behind a one-way mirror) order the guards to lock her up and have her executed in a few days. Slannen gets the giants, and the ogres come to help as well. They sneak into the castle. They rescue Ella and find out that Sir Edgar is poisoning the crown that is to be put on Char's head. When the crown is just inches above his head, Ella and the ogres and Slannen barge in and the crown is put aside. Knights are ordered out by Edgar, but Prince Char and Ella along with the ogres and Slannen defeat them all. During the fight, Ella reveals everything that happened, and Mandy is finally able to change Benny back into a man.

Sir Edgar then admits his plan, but yells to all that only he is fit to wear the crown. He then mistakenly puts it on his head, and falls to the ground from the poison. A few seconds later Char asks Ella to marry him and she agrees.

During their wedding, which ends with a musical number ('s ""), it is revealed that Sir Edgar did not die, but was very badly poisoned.

The film received mixed reviews, with a 49% rating on Rotten Tomatoes. [http://www.rottentomatoes.com/m/ella_enchanted/ 10 February 2008]

Fans of the book complained over the film's drastic changes, and that it little resembled the original.Fact|date=July 2008