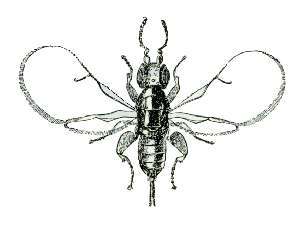 Fig wasps are s of the family Agaonidae which pollinate s or are otherwise associated with figs.

The family as presently defined is , including several unrelated lineages whose similarities are based upon their shared association with figs; efforts are underway to resolve the matter, and remove a number of constituent groups to other families, particularly the and . Thus, the number of genera in the family is in flux. Probably only the should be regarded as belonging to the Agaonidae, whilst the , and should be included in the Pteromalidae. Placement of the and remains uncertain.Among the Agaonidae, the female is a normal insect, while the males are mostly wingless. The males' only tasks are to mate with the females while still within the fig and to chew a hole for the females to escape from the fig interior. This is the reverse of and the , where the male is a normal insect and the female never leaves the host.

Most fig s contain three kinds of s: male, short female, and long female. Female fig wasps can reach the ovaries of short female flowers with their ovipositors, but not long female flowers. Thus the short flowers grow wasps, whereas the long flowers become seeds. In figs of this sort, the crunchy bits in the fruit contain both seeds and wasps. However, there are several commercial and ornamental varieties of fig that are self-fertile and do not require pollination; these varieties are not visited by fig wasps.

Pollinating fig wasps (Agaoninae) are specific to specific figs. The common fig "" is pollinated by " psenes".

Though the lives of individual species differ, a general fig wasp life cycle is as follows. In the beginning of the cycle, a mature female pollinator wasp enters a receptacle ("fruit") through a small natural opening, the ostiole, passes through the mouth of the fig, which is covered in male flowers, and deposits her eggs in the cavity, which is covered in female flowers, by . Forcing her way through the ostiole, she often loses her wings and most of her antennae. In depositing her eggs, the female also deposits pollen she picked up from her original host fig. This pollinates some of the female flowers on the inside surface of the fig and allows them to mature. After pollination, there are several species of non-pollinating wasps which deposit their eggs before the figs harden. These wasps act as parasites to either the fig or the pollinating wasps. As the fig develops, the wasp eggs hatch and develop into . After going through the pupal stage, the mature male’s first act is to mate with a female. The males of many species lack wings and are unable to survive outside the fig for a sustained period of time. After mating, a male wasp begins to dig out of the fig, creating a tunnel for the females to escape through.

Once out of the fig, the male wasps quickly die. The females leave the figs, picking up pollen as they do. They then fly to another tree of the same species where they deposit their eggs and allow the cycle to begin again.

Genera currently included in Agaonidae according to the [http://internt.nhm.ac.uk/jdsml/perth/chalcidoids/listChalcids.dsml?Superfamily=Chalcidoidea&Family=Agaonidae Universal Chalcidoidea Database] :