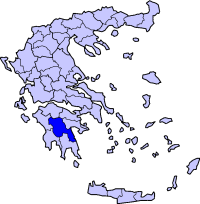 Arcadia or Arkadía (Greek Αρκαδία) is a region of in the . It takes its name from the mythological character .

Arcadia has its present-day capital at Tripoli. It forms the largest prefecture on the Peloponnesian peninsula. It currently covers about 18% of the entire peninsula, although it once extended to about 20 to 25% of the peninsula.

The prefecture has a skiing resort on Mount , the , located about 20 km NW of Tripoli. The other mountains include the in the southeast, the , the , the , the and .

The (E65) highway, which was extended after 1997 and in 2003, runs through Arcadia on a north-west to south-east axis and nearly forms in the southwest the end of the highway. A thermoelectric power station which produces electricity for most of southern Greece, operates to the south of Megalopolis, along with a coal mine.

Arcadia has two tunnels. The opened first, followed by the tunnel east of Megalopolis; both serve traffic flowing between and .

In agriculture, potato farms (dominant in central and northcentral Arcadia), mixed farming, olive groves, and pasture dominate the plains of Arcadia, especially in the area around Megalopolis and between Tripoli and Levidi. One of these cuisines were featured on 's cooking show hosted by that was shown on prime time.

Ancient and modern towns and cities

The chief cities and communities in the prefecture include Tripoli, Astros, , , Lagkadia, , , , Megalopolis and .

The climate consists of hot summers and mild winters in the eastern part, the southern part, the low lying areas and the central area at altitudes lower than 1,000 m. The area primarily receives rain during fall and winter months in the rest of Arcadia. Winter snow occurs commonly in the mountainous areas for much of the west and the northern part, the area, the n.

Due to its remote, mountainous character, Arcadia has always been a classical refuge. So during the , when Mycenaean Greek was replaced with along the coast of the Peloponnes, it survived in Arcadia, developing into the dialect of . Arcadocypriot never became a literary dialect, but it is known from inscriptions. is a letter of the occurring only in Arcadia, shaped like Cyrillic ; it represents an affricate that developed from s in context where they became "t" in other dialects. Tsakonian Greek , still spoken on the coast of the modern prefecture of Arcadia, in the Classical period considered the southern coast immediately adjoining Arcadia, is a descendant of , and as such is an extraordinary example of a surviving regional dialect of archaic Greek. The capital of is the Arcadian coastal town of .

One of the birthplaces reported for is in Arcadia. Lycaon, a cannibalistic king, was transformed into a by Zeus. Lycaon's daughter was Callisto. It was also said to have been the birthplace of Zeus' son, Hermes.

Arcadia remained a rustic, secluded area, and its inhabitants became proverbial as primitive herdsmen leading simple unsophisticated yet happy lives, to the point that "Arcadia" may refer to some imaginary idyllic paradise, immortalized by 's , and later by in his pastoral masterpiece, "Arcadia" (1504); see also .

Arcadia later joined the and later the . After the , the area became a part of the . In the mid-15th century, the region fell into the hands of the Ottoman Turks with some exceptions in the 16th century for a couple of years. During these periods, many towns and villages were founded.

The Latin phrase "" which is usually interpreted to mean "I am also in Arcadia" or "I am even in Arcadia" is an example of "", a cautionary reminder of the transitory nature of life and the inevitability of death. The phrase is most often associated with a 1647 painting by , also known as "The Arcadian Shepherds". In the painting the phrase appears as an inscription on a tomb discovered by youthful figures in classical garb. It has been suggested that the phrase is an anagram for the Latin phrase "I! Tego arcana Dei", which translates to "Begone! I keep God's secrets."From The Holy Blood and the Holy Grail.

After 400 years of occupation by the Ottomans, Arcadia was the centre of the which saw victories in their battles including one in Tripoli which saw the Greek revolutionaries slaughter around 30,000 Turks. After a victorious revolutionary war, Arcadia was finally incorporated into a newly-created Greek state. Arcadia saw economic growth and small emigration.

In the 20th century, Arcadia experienced extensive population loss through emigration, mostly to the . Many Arcadian villages lost almost half their inhabitants, and fears arose that they would turn into ghost towns. Arcadia now has a smaller population than ia. Demographers expected that its population would halve between 1951 and the early 21st century. The prefectural population is in a range to a point that could fall below the 100,000 mark which could make it the next prefecture in Greece to have fewer than 100,000 people.

After and the , many villages and towns were rebuilt.

An enormous earthquake with a 5 Richter scale range shook Megalopoli and the surrounding area. Many buildings were destroyed, leaving people homeless. Within a couple of years, the buildings were rebuilt anti-seismically. In 1967, construction began on the . It began operating in 1970, producing electricity for southern Greece. A mining area south of the plant is the largest mining area in the peninsula and continues to the present day with one settlement moved.

Water problems troubled local residents protesting over the rights of water usage with the Argolida and its new reservoir near Saga, on , . On , a wildfire broke out in in the western portion, threatening several nearby villages and burning a small portion of the forested area. Less than a month later, another minor forest fire occurred near , on Thursday . A day later, the minor fire became a major blaze beginning in the southwest of Arcadia . Arson-related fires spread and burned villages including , , , , , near Megalopoli, and , and burned around 5% of the prefecture and the southwestern portion. The fire raging in the southern Ilia prefecture spread into Arcadia, and began to burn and the area around . Residents prevented the fire from entering Megalopoli, Karytaina, and its surrounding area by chopping down trees, preventing it from entering the village; helicopters received water from and the sea. The fires continued from Friday , with high winds and hot temperatures reported at 42°C ; the outbreaks slowed slowed three days later but progressed on Tuesday . The blazes finally died down when temperatures dropped and a low pressure system from southern Europe brought rain into the area; roads had been closed and electricity cut off for several days. At the extinguishing of the fire, hundreds of mobile homes were sent to inhabitants who had lost houses. Trees and a number of groves are to be planted, but it is expected to take a few years to restore part of the area's natural beauty and forest. Less seriously for the area, Kynouria experienced weather problems in the winter, with a snowstorm affecting Leonidi and the village of Agios Petros on , .

*The Greek and name Arcadius/Arkadios was derived from "Arcadia" (see the Emperor , the grammarian , the patriarch ). From Greek it passed in Russian, Ukrainian, and other , where it is a common male name as Arkady or Arcady.
* was a band created as a project by the 80's English iconic pop band, Duran Duran, in 1985. It included Duran Duran members, , , and . The name of this band was chosen for the mystique surrounding Arcadia as a place of mystery and symbolic secrecy.
*The area of the prefecture were featured in several ERT programs including documentaries on the Megalopoli Mine and Ladon Lake
*In the 2006 Doctor Who episode 'Doomsday', the Doctor mentions being 'there at the fall of Arcadia', where Arcadia is insinuated to be an unspecified area of possible strategic importance in the Time War, unlikely to be the Arcadia of Greece.
*The tactical "" features a hidden Utopian city where man and lives in harmony. This city is called "Arcadia", and is founded by the legendary Archsage Athos.
*In the video game , "Arcadia" is the name of an area in one of the levels, with an artificial forest and touted as a vacation paradise.
*In the 1988 video game "Battle of Olympus" Arcadia, is the initial staring point of the game.
*In the Stardust Classics children's fantasy novels, Arcadia is the name of a kingdom ruled by the young Princess Alissa.
*In the film 300 Leonidas is joined by a group of Arcadians to help him fight against the Persians.
*In Space Pirate Captain Harlock, the show's main ship is called Arcadia, perhaps hinting that the ship itself is a sort of refuge to pirates.
*In the text MUD Achaea, Arcadia is the home of a race of winged humans (Atavians).
*In the series of games Megaman Zero, (Neo) Arcadia is the utopian city where humans live in apparent peace with reploids.
*The word Arcadia has become a poetic idylism meaning "Utopia". is among many who has used this symbol in their work.
*The name of the planet in the game is Arcadia. It is a planet with a completely barren wasteland floor level, but is mainly populated in its sky, which has a large system of floating islands, each flourishing under six different colored moons that orbit the planet.
*In the Playstation 2 Game Final Fantasy XII there is a militaristic city known as Archadia
*In the TV series The Legend of Zelda the White Knight Character Appearing in Episode 3 comes from a city called Arcadia.
*In the TV series The X-Files, the thirteenth episode of the sixth season is named "Arcadia".
*The mythic world that adorns the album covers of the rock band Asia. Specifically the albums Alpha (1983) and Astra (1985)
*Arcadia is one of twin worlds in the popular computer game and it`s sequel .
*In , Arcadia is the name of the number 1 ranked AC.
*In the game , the areas of the game are all said to be within the city of New Arcadia.
*In the movie The Scorpion King, the main character and his brothers are the last in a line of people known as Arcadians.