Muzio Attendolo was a Condottieri-class light cruiser of the Italian Regia Marina, which fought in World War II. She was sunk in Naples by bombers of the United States Army Air Forces on 4 December 1942. Although salvaged after the war she was damaged beyond repair and was scrapped.

Muzio Attendolo was part of the Montecuccoli sub-class, which were the third group of Condottieri class light cruisers. They were larger and better protected than their predecessors.

She was built by CRDA Trieste and named after Muzio Attendolo, a 14th century ruler of Milan and founder of the Sforza dynasty. 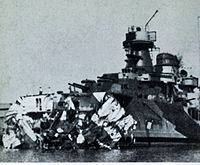 The ship was, actually, swiftly repaired. Apparently, the fore ship was easier to repair than a mid-ship hit. (Cruiser Bolzano, hit in the same attack, was not repaired even 13 months after that action.) Three months later, the cruiser was already repaired and almost ready.

Attendolo was at least theoretically in strength with the 7th Naval division, together with two other Condottieri-cruisers, Eugenio di Savoia and Raimondo Montecuccoli. But the real formidable deterrent was the 1st Squad, with all three Littorio-class battleships. All this could have been effective with classical naval warfare, but aircraft power soon changed things drastically, as shown in the Taranto and Naples port attacks (1940-41).

In late December, B-24 heavy bombers almost undisturbed increased their activity over Naples, the most important naval base, as Taranto had become too dangerous to harbour major ships, but Naples was still in the range of Liberator and Wellington bombers.

On 4 December 1942, St. Barbara’s Day,[1] 20 USAAF B-24s of 98 and 376 Sqn, based in Egypt, flew to Naples unnoticed. Confused with a formation of Ju 52s, and flying apparently from Vesuvio, they were already over the port before flak fire started. This happened at 16.40. B-24s bombed with 500 and 1000 lbs bombs from 6,200 m. They searched for battleships, but these important targets were missed. On the other hand, while battleships were important but also hard to damage or sink, there were other ships less important, but much more vulnerable. Light cruisers were both light armoured and important targets, and the whole 7th Division was heavily struck.

Eugenio di Savoia had a near miss, but the aft hull was damaged, 17 killed, 46 wounded, flooding and repair works for estimated 40 days. Montecuccoli was hit by a bomb in the midship, just inside the funnel. The funnel was disintegrated, leaving a smoking crater in its place. Internal protection (an armoured grate) worked well enough to almost save the machinery, but the ship had 44 killed and 36 wounded, and needed seven months of works.

Attendolo was hit in the midship by one or possibly two bombs, between tower 3 and tripod. The ship was totally taken out. The B-24 raid lasted until 17:28, and only after one hour first aid arrived. Attendolo had no power and there was damage below the waterline, and fierce fires aft. When the fires were finally extinguished the ship was not yet safe. She could have been saved, but at 21:17 an alarm was launched. It seemed that another raid was ongoing, but this time this was not the case. Suddenly all the ships and boats escaped from the damaged cruiser. The lack of assistance lasted for over one hour, and when the boats returned it was too late. The ship hit the bottom and rolled of almost 180 degrees. It happened at 22:19. At least 188 were killed (the total number is unknown) and 86 wounded. One sailor was killed on Littorio, and 150 to 250 civilians died as well. Major ships were swiftly moved to La Spezia. Attendolo was still repairable with 10 to 12 months estimated, but this never happened. The ship was used as dock with the Allied occupation, and raised and demolished in the post war period. The other two cruisers were repaired with some delays.