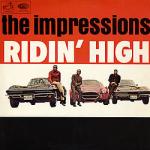 "Ridin' High" is an album by the American group The Impressions.