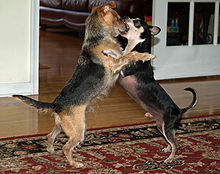 Dog behavior refers to the collection of behaviors by the domestic dog, Canis lupus familiaris, and is believed to be influenced by genetic, social, situational and environmental causes. The domestic dog is a subspecies of the grey wolf, and shares many of its behavioral characteristics. Although there are important and distinct differences between dogs and wolves, contemporary views of dog behavior are heavily influenced by research on wild wolves.

The social unit of dogs is the pack. From research on wolf packs that are formed in captivity, the pack has traditionally been thought of as a tightly knit group composed of individuals that have earned a ranking in a linear hierarchy, and within which there is intense loyalty. It is believed that dogs were able to be domesticated by and succeed in contact with human society because of their social nature. According to this traditional belief, dogs generalize their social instincts to include humans, in essence "joining the pack" of their owner/handler. However, much of this traditional view is based on findings from grey wolf packs that are formed of unrelated animals in captivity, and thus may not apply to natural wolf packs, natural dog packs, or dogs incorporated into a human household. Research in packs formed in the wild indicates that wolves form a family group, including a breeding pair and their offspring. In these familial packs, the terms "dominance," and "submission" are less useful than "parent," and "offspring," and bring with them a number of misconceptions. While the majority of research to date indicates that domestic dogs conform to a hierarchy around an Alpha-Beta-Omega structure, domestic dogs, like their wild wolf counterparts, also interact in complex hierarchical ways.

The existence and nature of personality traits in dogs have been studied (15,329 dogs of 164 different breeds) and five consistent and stable "narrow traits" identified, described as playfulness, curiosity/fearlessness, chase-proneness, sociability and aggressiveness. A further higher-order axis for shyness–boldness was also identified.[1][2]

Dr. David Mech of the University of Minnesota, who has studied wolves in their natural habitat, claims that much of what is widely believed about wolf packs is mistaken. From observations of wolf packs on Ellesmere Island over more than a decade,[3] he claims that natural wolf packs are not at all similar to those formed in captivity by unrelated wolves. He attributes many of the misconceptions about wolf packs to generalizations from these unnatural packs in captivity, and equates this to erroneous inferences we might draw from generalizing human behavior from studying refugee camps.

Dr. Mech argues that the natural wolf pack is typically a family, with a breeding pair of adult wolves and their offspring. In such cases, the terms "alpha" and "dominant" are less appropriate than "parent." Of course, the parent wolves are both "alpha" and "dominant" (by definition), but he argues that these terms are misleading because they imply that a pack of wolves typically include multiple families and that the members assume a place in a linear hierarchy. A wolf pack should not be seen as a tribe of individuals who have an established place in a hierarchy until a younger dog usurps the role. Rather, a wolf pack should be seen as a family unit, with young wolves of age dispersing into new territories of their own, to find other wolves and begin their own family units.

Mech also states that dominance is rare in wild wolves, and does not arise from sexual competition. Because young wolves usually disperse before age two, and almost always before age three, there is little sexual tension within a pack. Instead of "dominance" and "submission," he uses the terms "assertiveness" and "passiveness" to reflect the role of the wolf in the pack. Dominant breeding pairs led the pack most of the time (71%), and initiated most new behaviors (70%). Leadership behavior in subordinate pack members tended to be followed by dispersion.[4]

Properly socialized dogs can interact with unfamiliar dogs of any size and shape and understand how to communicate.

It is believed by some that dogs establish a dominance hierarchy through aggressive play and roughhousing along a continuum of dominance and submission,[citation needed] although the concept of social hierarchies in dogs is unproven and controversial. It is important for successful socialization that puppies participate with their littermates in learning to relate to other dogs. Dogs learn to successfully relate to other dogs by keeping the peace, rather than by constantly fighting to reestablish this hierarchy.

Although dogs are commonly characterized in terms of their dominance (e.g., "Fido is the alpha."), there is some controversy as to whether dominance is a stable personality trait.

In wild wolf packs, displays of dominance have been observed to include "licking up," which involves essentially begging for food; "pinning," in which the dominant dog appears to threaten another, which shows submission by rolling over; "standing over"; territorial marking; and more passive expressions of body language, including holding the tail and ears erect, looking directly at other dogs, circling and sniffing other dogs, growling if the other dog moves.

Submissive displays mirror dominant displays and include adopting a posture that is physically lower than other dogs, such as crouching, rolling over on the back and exposing the abdomen, lowering the tail (sometimes to the point of tucking it between the legs), flattening of the ears, averting the gaze, nervously licking or swallowing, dribbling of urine, and freezing or fleeing when other dogs are encountered.

In wolves, recent research has indicated that dominant behaviors have been misinterpreted as personality traits that determine the inidividual's place in a linear hierarchy in the pack. In contrast, Mech (see recent research, below) argues that packs are family units, and that the "alpha" of a pack does not change through struggles for dominance. Rather, he argues that the family unit serves to raise the young, which then disperse to pair up with other dispersed wolves to form a breeding pair, and a pack of their own. This model undermines the popular conception of dominance in wolf social behavior.

Research on canine familiaris has also questioned whether dominance is a personality trait. Svartberg and colleagues (2002) gathered behavioral data from 15,000 dogs of 164 breeds in attempt to identify major personality traits. In an approach similar to those used in humans, the authors performed a factor analysis of their data, and identified five major traits: "Playfulness," "Curiosity/Fearlessness," "Chase-proneness," "Sociability," "Aggressiveness." A similar analysis by Goddard and Beilharz (1985) revealed two major factors in social behavior: "Confidence," and "Aggression–dominance."

These studies suggest that dominance, per se, may not be a personality trait. Rather, underlying personality traits such as aggressiveness, confidence and curiosity may affect the prevalence of dog behaviors that are viewed as dominant.

A Pomeranian as a recipient of human interaction during Christmas.

Research has shown that there are individual differences in the interactions between dogs and their human masters that have significant effects on dog behavior. For instance, Topal and colleagues (1997) have shown that the type of relationship between dog and master, characterized as either companionship or working relationship, significantly affected the dog's performance on a cognitive problem-solving task. They speculate that companion dogs have a more dependent relationship with their owners, and look to them to solve problems. In contrast, working dogs are more independent.

Dogs value the companionship of the others in their "pack" and are sometimes distressed if they are separated from it. Typical reactions when a dog is separated from the pack are barking, howling, digging, and chewing. These activities may distress humans when they need to leave dogs alone for a period of time. However, this behavior, called separation anxiety, can be overcome with training, or at least decreased to the point where it becomes manageable. If young puppies are habituated to periods alone from an early age, this can normally be prevented entirely. Dogs are also crepuscular, meaning their natural period of peak activity is dawn and dusk,[5] and may be content to rest during the day and night (because of this trait, domestic dogs are more likely to show barking and chewing activity at times when people are leaving to or returning from work.[6]). Some owners struggling to deal with this problem resort to devocalization, a controversial practice considered cruel by animal advocates and outlawed in many countries.

From a young age, dogs engage in play with one another. Dog play is made up primarily of mock fights. It is believed that this behavior, which is most common in puppies, is training for important behaviors later in life. Research on puppy play has shown that puppies do not engage equally in both dominant and submissive roles in fights; rather, puppies will tend to start play fights with weaker puppies they believe they can dominate.[7] Additionally, puppies will intervene in play engaged by other pairs. In these situations, the puppies overwhelmingly aid the dominant dog. Puppies do not show reciprocity in interventions, suggesting that they prefer to be dominant in a fight, and are being opportunistic in the short-term. In the long-term, intervention may aid the puppies in learning coordination.

A common behavior among domesticated dogs is chasing their own tails. Researchers are not completely certain why dogs chase their own tail, however some research studies found a link between tail-chasing and high cholesterol. A study found that when dogs experience an increase in activity of hormones tied to the "fight or flight" response, it causes dogs to chase their tails more often.[8]