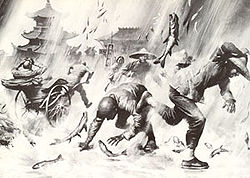 Rain of fish in Singapore, as described by local inhabitants

Raining animals is a rare meteorological phenomenon in which flightless animals "rain" from the sky. Such occurrences have been reported from many countries throughout history. One hypothesis offered to explain this phenomenon is that strong winds traveling over water sometimes pick up creatures such as fish or frogs, and carry them for up to several miles.[1] However, this primary aspect of the phenomenon has never been witnessed or scientifically tested.

Sometimes the animals survive the fall, suggesting the animals are dropped shortly after extraction. Several witnesses of raining frogs describe the animals as startled, though healthy, and exhibiting relatively normal behavior shortly after the event. In some incidents, however, the animals are frozen to death or even completely encased in ice. There are examples where the product of the rain is not intact animals, but shredded body parts. Some cases occur just after storms having strong winds, especially during tornadoes.

However, there have been many unconfirmed cases in which rainfalls of animals have occurred in fair weather and in the absence of strong winds or waterspouts.

Rains of animals (as well as rains of blood or blood-like material, and similar anomalies) play a central role in the epistemological writing of Charles Fort, especially in his first book, The Book of the Damned. Fort collected stories of these events and used them both as evidence and as a metaphor in challenging the claims of scientific explanation.

The English language idiom "it is raining cats and dogs", referring to a heavy downpour, is of uncertain etymology, and there is no evidence that it has any connection to the "raining animals" phenomenon.

Note that this is a regular occurrence for birds, which can get killed in flight, or stunned, and then fall (unlike flightless creatures, which first have to be lifted into the air by an outside force). Sometimes this happens in large groups, for instance, the blackbirds falling from the sky in Beebe, Arkansas, United States on December 31, 2010.[2] It is common for birds to become disoriented (for example, because of bad weather or fireworks) and collide with objects such as trees or buildings, killing them or stunning them into falling to death. The number of blackbirds killed in Beebe is not spectacular considering the size of their congregations, which can be in the millions.[3] The event in Beebe, however, captured the imagination and lead to more reports in the media of birds falling from the sky across the globe, such as in Sweden and Italy,[4] though many scientists claim such mass deaths are common occurrences but usually go unnoticed.[5] 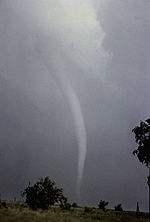 Tornadoes may lift up animals into the air and deposit them miles away.

French physicist André-Marie Ampère was among the first scientists to take seriously accounts of raining animals. He tried to explain rains of frogs with a hypothesis that was eventually refined by other scientists. Speaking in front of the Society of Natural Sciences, Ampère suggested that at times frogs and toads roam the countryside in large numbers, and that the action of violent winds can pick them up and carry them great distances.[6]

More recently, a scientific explanation for the phenomenon has been developed that involves tornadic waterspouts.[7] Waterspouts are capable of capturing objects and animals and lifting them into the air. Under this theory, waterspouts or tornados transport animals to relatively high altitudes, carrying them over large distances. The winds are capable of carrying the animals over a relatively wide area and allow them to fall in a concentrated fashion in a localized area.[8] More specifically, some tornadoes can completely suck up a pond, letting the water and animals fall some distance away in the form of a rain of animals.[9]

This hypothesis appears supported by the type of animals in these rains: small and light, usually aquatic.[10] It is also supported by the fact that the rain of animals is often preceded by a storm. However the theory does not account for how all the animals involved in each individual incident would be from only one species, and not a group of similarly-sized animals from a single area. 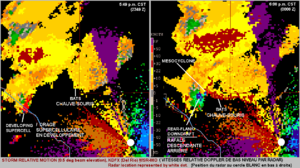 Doppler Image from Texas showing the collision of a thunderstorm with a group of bats in flight. The color red indicates the animals flying into the storm.

In the case of birds, storms may overcome a flock in flight, especially in times of migration. The image to the right shows an example where a group of bats is overtaken by a thunderstorm.[11] The image shows how the phenomenon could take place in some cases. In the image, the bats are in the red zone, which corresponds to winds moving away from the radar station, and enter into a mesocyclone associated with a tornado (in green). These events may occur easily with birds in flight. In contrast, it is harder to find a plausible explanation for rains of terrestrial animals; the enigma persists despite scientific studies.

Sometimes, scientists have been incredulous of extraordinary claims of rains of fish. For example, in the case of a rain of fish in Singapore in 1861, French naturalist Francis de Laporte de Castelnau explained that the supposed rain took place during a migration of walking catfish, which are capable of dragging themselves over the land from one puddle to another.[12] Thus, he argued that the appearance of fish on the ground immediately after a rain was easily explained, as these animals usually move over soft ground or after a rain.

1555 engraving of rain of fish 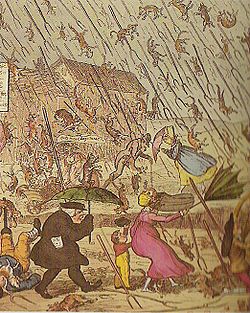 The English idiom "it is raining cats and dogs", used to describe an especially heavy rain, is of unknown etymology, and is not necessarily related to the "raining animals" phenomenon.[29] The phrase (with "polecats" instead of "cats") was used at least since the 17th century.[30][31] A number of improbable folk etymologies have been put forward to explain the phrase,[32] for example:

There may not be a logical explanation; the phrase may have been used just for its nonsensical humor value, like other equivalent English expressions ("it is raining pitchforks", "hammer handles", etc.).

Other languages have equally bizarre expressions for heavy rain:[34][35]