Montgomery County is a rural county located in the U.S. state of North Carolina. As of 2000, the population was 26,823. Its county seat is Troy[1]. Montgomery County's motto is "The Golden Opportunity".

The county was formed in 1779 from Anson County. It was named in honor and respect of Richard Montgomery, an American Revolutionary War general killed in 1775 while attempting to capture Quebec City, Canada. In 1841 the part of Montgomery County west of the Pee Dee River became Stanly County.

Montgomery County is a sustaining member of the regional Piedmont Triad Council of Governments.

As of the 2000 Census, Montgomery County is located entirely in North Carolina's 8th congressional district and is currently represented in the 111th United States Congress by Larry Kissell (D). 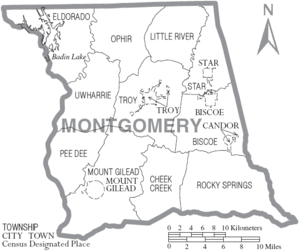