Some old Greek Bible manuscripts have "Magadan" for one of the places in Palestine usually known as Magdala.

Magadan (Russian: Магада́н, IPA: [məɡɐˈdan]) is a port town on the Sea of Okhotsk and gateway to the Kolyma region. It is the administrative center of Magadan Oblast (since 1953), in the Russian Far East. Founded in 1929 on the site of an earlier settlement from the 1920s, it was granted the status of town in 1939. From 1932 to 1953 it was the administrative center of the Dalstroy concern and its corrective labor camp system. It lies in Nagayevo Bay in the Gulf of Tauisk. Population: 114,873 (2008 est.);[citation needed] 99,399 (2002 Census);[1] 151,652 (1989 Census).[4] Ship building and fishing are the major industries. The town has a seaport (fully navigable from May to December) and a small international airport, Sokol Airport. There is also a small airport nearby, Magadan 13. The unpaved Kolyma Highway leads from Magadan to the rich gold-mining region of the upper Kolyma River and then on to Yakutsk.

In 1932, Magadan was made Dalstroy's capital, and served as a port for exporting gold and other metals mined in the Kolyma region.[5] Its size and population grew quickly as facilities were rapidly developed for the expanding mining activities in the area. Town status was granted on July 14, 1939.

During the Stalin era, Magadan was a major transit center for prisoners sent to labor camps. The operations of Dalstroy, a vast and brutal forced-labor gold-mining concern, were the main economic driver of the city for many decades during Soviet times.

On an official visit in May 1944, U.S. Vice President Henry Wallace failed to understand the true nature of Magadan.[6] The watchtowers had been temporarily taken down and the prisoners were locked up, while a model farm had been set up for his inspection.[7] He took an instant liking to his secret policeman host, admired handiwork done by prisoners, and later glowingly pronounced the city "a combination of TVA and Hudson's Bay Company", which 8 years later he apologized for not understanding the true situation.

Further details of this period are given in the article on Kolyma.

Magadan is very isolated. The nearest major city is Yakutsk, 2,000 kilometers (1,200 mi) away via an unpaved road which is best used in the winter, especially since there is no bridge over the Lena River at Yakutsk (the choices are: ferry from Nizhny Bestyakh in the summer, when the rest of the road may not be passable due to standing water, or over the ice in the dead of winter).

The principal sources of income for the local economy are gold mining and fisheries. Recently, gold production has declined[8] although future prospects look good.[citation needed] Fishing production, although improving from year to year, is still well below the allocated quotas, apparently as a result of an ageing fleet.[9] Other local industries include pasta and sausage plants and a distillery.[10] Although farming is difficult owing to the harsh climate, there are many public and private farming enterprises. 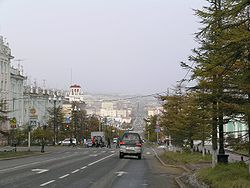 Magadan was the focal point of the Long Way Round motorcycle journey made by Ewan McGregor, Charley Boorman and their team in 2004. Although their ultimate destination was New York, they frequently noted how reaching Magadan was the ultimate measure of success or failure for their adventure. Despite encountering swollen rivers, broken bridges and virtually impassable roads as they traveled through Siberia, they were ultimately able to ride the "Road of Bones" into Magadan, and flew from there to Anchorage, Alaska from where they continued to New York. Recalling his final day in Magadan before leaving for America, McGregor wrote:

"Magadan, Siberia. The place that had been in my thoughts and dreams for two years, like a mythical city forever beyond my reach. I wanted to capture it, somehow hold on to it and take a part of it with me when we began the long journey home." 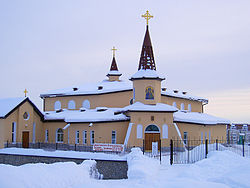 Church of the Nativity

The city has a number of cultural institutions including the Regional Museum of Anthropology, a geological museum, a regional library and a university. The city has the enormous new Orthodox Cathedral Church of the Trinity, a recently completed Roman Catholic Church of the Nativity and the Mask of Sorrow memorial, a huge sculpture in memory of Stalin's victims, designed by Ernst Neizvestny.