The general structure of a boronic acid, where R is a substituent.

A boronic acid is an alkyl or aryl substituted boric acid containing a carbon–boron bond belonging to the larger class of organoboranes. Boronic acids act as Lewis acids. Their unique feature is that they are capable of forming reversible covalent complexes with sugars, amino acids, hydroxamic acids, etc. (molecules with vicinal, (1,2) or occasionally (1,3) substituted Lewis base donors (alcohol, amine, carboxylate)). The pKa of a boronic acid is ~9, but they can form tetrahedral boronate complexes with pKa ~7. They are occasionally used in the area of molecular recognition to bind to saccharides for fluorescent detection or selective transport of saccharides across membranes.

Boronic acids are used extensively in organic chemistry as chemical building blocks and intermediates predominantly in the Suzuki coupling. A key concept in its chemistry is transmetallation of its organic residue to a transition metal.

The compound bortezomib with a boronic acid group is a drug used in chemotherapy. The boron atom in this molecule is a key substructure because through it certain proteasomes are blocked that would otherwise degrade proteins.

Many air-stable boronic acids are commercially available. They are characterised by high melting points. Since boronic acids easily lose water to form the cyclic trimeric anhydride, commercial material oftentimes contains substantial quantities of this anhydride. This does not affect reactivity.

Boronic acids can be obtained via several methods. The most common way is reaction of organometallic compounds based on lithium or magnesium (Grignards) with borate esters.[1][2][3][4] For example phenylboronic acid is produced from phenylmagnesium bromide and trimethyl borate followed by hydrolysis [5]

Another method is reaction of an arylsilane (RSiR3) with boron tribromide (BBr3) in a transmetallation to RBBr2 followed by acidic hydrolysis.

A third method is by palladium catalysed reaction of aryl halides and triflates with diboronyl esters in a coupling reaction. An alternative to esters in this method is the use of diboronic acid or tetrahydroxydiboron ([B(OH2)]2).[6][7]

Boronate esters are esters formed between a boronic acid and an alcohol.

The compounds can be obtained from borate esters [8] by condensation with alcohols and diols. Phenylboronic acid can be selfcondensed to the cyclic trimer called triphenyl anhydride or triphenylboroxin.[9]

Compounds with 5-membered cyclic structures containing the C-O-B-O-C linkage are called dioxaborolanes and those with 6-membered rings dioxaborinanes.

Boronic acids are used in organic chemistry in the Suzuki reaction. In this reaction the boron atom exchanges its aryl group with an alkoxy group from palladium.

In the Chan-Lam coupling the alkyl, alkenyl or aryl boronic acid reacts with a N-H or O-H containing compound with Cu(II) such as copper(II) acetate and oxygen and a base such as pyridine [10][11] forming a new carbon–nitrogen bond or carbon–oxygen bond for example in this reaction of 2-pyridone with trans-1-hexenylboronic acid:

In the Liebeskind-Srogl coupling a thiol ester is coupled with a boronic acid to produce a ketone.

Another conjugate addition is that of gramine with phenylboronic acid catalyzed by cyclooctadiene rhodium chloride dimer [13]:

Boronic esters are oxidized to the corresponding alcohols with base and hydrogen peroxide (for an example see: carbenoid)

In this reaction dichloromethyllithium converts the boronic ester into a boronate. A lewis acid then induces a rearrangement of the alkyl group with displacement of the chlorine group. Finally an organometallic reagent such as a Grignard reagent displaces the second chlorine atom effectively leading to insertion of an RCH2 group into the C-B bond. Another reaction featuring a boronate alkyl migration is the Petasis reaction.

Allyl boronic esters engage in electrophilic allyl shifts very much like silicon pendant in the Sakurai reaction. In one study a diallylation reagent combines both [15][note 1]: 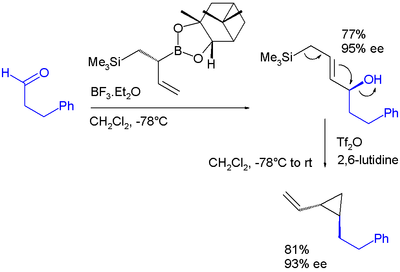 Hydrolysis of boronic esters back to the boronic acid and the alcohol can be accomplished in certain systems with thionyl chloride and pyridine.[16] Aryl Boronic acids or esters may be hydrolyzed to the corresponding phenols by reaction with hydroxylamine at room temperature.[17]

The diboron compound bis(pinacolato)diboron[18] reacts with aromatic heterocycles[19] or simple arenes[20] to an arylboronate ester with iridium catalyst [IrCl(COD)]2 (a modification of Crabtree's catalyst) and base 4,4′-di-tert-butyl-2,2′-bipyridine in a C-H coupling reaction for example with benzene:

Unlike in ordinary electrophilic aromatic substitution (EAS) where electronic effects dominate, the regioselectivity in this reaction type is solely determined by the steric bulk of the iridium complex. This is exploited in a meta-bromination of m-xylene which by standard AES would give the ortho product[22][note 2]: 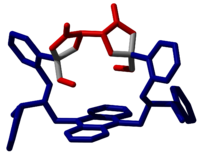 The covalent pair-wise interaction between boronic acids and 1,2- or 1,3-diols in aqueous systems is rapid and reversible. As such the equilibrium established between boronic acids and the hydroxyl groups present on saccharides has been successfully employed to develop a range of sensors for saccharides.[23] One of the key advantages with this dynamic covalent strategy[24] lies in the ability of boronic acids to overcome the challenge of binding neutral species in aqueous media. If arranged correctly, the introduction of a tertiary amine within these supramolecular systems will permit binding to occur at physiological pH and allow signalling mechanisms such as photoinduced electron transfer mediated fluorescence emission to report the binding event.

Potential applications for this research include systems to monitor diabetic blood glucose levels. As the sensors employ an optical response, monitoring could be achieved using minimally invasive methods, one such example is the investigation of a contact lens doped with boronic acid based sensors to monitor glucose levels within ocular fluid.[25]