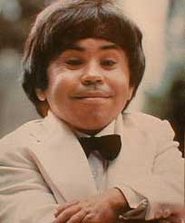 Hervé Jean-Pierre Villechaize (, - , ) was a French who achieved worldwide recognition for his role as Mr. Roarke's assistant, Tattoo, in the "" (1978 - 1984). He was also well known for playing the evil Nick Nack in the film "The Man with the Golden Gun".

Villechaize suffered from proportionate (as opposed to ) due to a dysfunction, despite his surgeon father's attempts to cure the disease in several institutions. In later years, he insisted on being called a midget, rather than "," irritating activists like .

Villechaize was born and raised in to English-born Evelyn (Recchionni) and stepfather André Villechaize, a French surgeon. He also had Filipino ancestry. [ [http://notablefilipinos.com/USA.htm USA ] ] Villechaize was bullied at school for his condition and found solace in painting. After studying art at Beaux-Arts college, he left for the USA in 1964. He settled in a bohemian section in New York, taught himself English by watching television, and continued his career as an artist and photographer. He began acting in off-Broadway productions, including "The Young Master Dante" by Werner Liepolt and a play by , and also did some photo shoot modelling for National Lampoon, before moving on to film.

His first movie appearance was in "Chappaqua" in 1966, which was followed by several films including Christopher Speeth's and Werner Liepolt's Malatesta's Carnival of Blood, "", "Seizure" directed by , "" and "The Forbidden Zone". He was then asked to play a part in the film Dune, which had originally begun pre-production in 1971; however, the project was cancelled.

His big break was getting cast in "The Man with the Golden Gun" in 1974, by which time he had become so poor he was living out of his car in Los Angeles. From what his co-actor saw, "The Man with the Golden Gun" filming was possibly the happiest time of Hervé's life, Lee likening it to honey in the sandwich between an insecure past and an uncertain future. In addition to being an actor, Villechaize became an active member of a movement in 1970s-1980s California to deal with child abuse and neglect, often going to crime scenes himself to help comfort abuse victims. Villechaize's former co-workers recalled that despite his stature, he would often confront and chastise spousal and child abusers when he arrived at crime scenes.

Though popular with the public, Villechaize proved a difficult actor on "" where he continually propositioned women and quarrelled with the producers. He was eventually fired after demanding that his pay be on par with that of co-star . The show's popularity waned after this move, and it was soon cancelled. According to his former butler in an episode of the E! True Hollywood Story [ [http://www.imdb.com/title/tt0288044/ "E! True Hollywood Story" Herve Villechaize (1999) ] ] , Villechaize never got over losing his job, and for the remainder of his life practiced an often nightly ritual of drinking in a darkened room while screaming obscenities at an episode of "Fantasy Island" playing on his television.

As a consequence of his health problems and troubles in his professional career, Villechaize became alcoholic and depressive in the last few years of his life, which led to erratic and sometimes violent behavior, including an incident in which he allegedly held his agent at gunpoint in a booth at a restaurant in Los Angeles.

In the early morning hours of , , Hervé shot himself at his home. He was found by his longtime girlfriend, Kathy Self, and rushed to the Medical Center at . He died later that day as a result of his injuries. [ [http://query.nytimes.com/gst/fullpage.html?res=9F0CE6DE143EF936A3575AC0A965958260 Herve Villechaize; Actor, 50, Commits Suicide at His Home - New York Times ] ] Kathy Self stated to the media that Hervé Villechaize did not know who his biological father was since he was adopted at the age of two by André Villechaize.

At the time of his suicide, was in negotiations for him to co-star in "", which was in pre-production at the time. Villechaize would have been 's sidekick on the show. [ [http://www.c4vct.com/kym/sg/pilots/pilot2.htm Space Ghost Coast to Coast: The Second Pilot ] ]