Stuckism is an that was founded in 1999 in Britain by and Charles Thomson to promote figurative painting in opposition to . The Stuckists formed as an alternative to the -patronised (also known as Brit Art or abbreviated to ). The original group of thirteen artists has since expanded to 183 groups in 44 countries. Childish left the group in 2001.

They have staged many shows, but have gained more attention for outspoken media comments and demonstrations, particularly outside against the , sometimes dressed in clown costumes. After exhibiting mainly in small galleries in , , they were given their first show in a major public museum in 2004, The as part of the . Other campaigns mounted by the group include official avenues, such as standing for parliament, reporting Saatchi to the to complain about his power in the art world, and applying under the for trustee minutes, which started a media scandal about the purchase of 's work, "The Upper Room" (which led to an official rebuke of the Tate by the ). 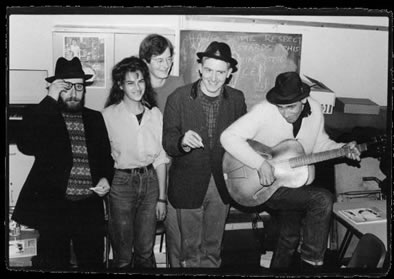 thumb|Sexton_Ming,_Tracey_Emin,_Charles_Thomson,_Billy_Childish_and_musician_Russell_Wilkinson_at_the_Rochester_Adult_Education_Centre_, to record LP] The name Stuckism was coined by Thomson in response to a comment, made by artist to , then her boyfriend, which he had recorded in a poem as::Your paintings are stuck,:you are stuck!:Stuck! Stuck! Stuck!

The group are defined by their "Stuckists" , written by Childish and Thomson in 1999, that places great importance on the value of painting as a medium, as well as the use of it for communication and the expression of emotion and experience - as opposed to what they see as the superficial novelty, nihilism and irony of and .

The most contentious statement in their manifesto is: "Artists who don't paint aren't artists". In a second manifesto, the Stuckists declared that they aimed to replace postmodernism with , a period of renewed spiritual (as opposed to religious) values in art, culture and society. Other manifestos include "An Open Letter to Sir " (which received a brief reply from him [ [http://www.stuckism.com/serotareply.html "An open letter to Sir Nicholas Serota"] , 1999. Retrieved ] : Thank you for your open letter dated 6 March. You will not be surprised to learn that I have no comment to make on your letter, or your manifesto 'Remodernism'.), "The Turner Prize", "The Decrepitude of the Critic", and "Handy Hints".

In January 1999, the first Stuckists group was co-founded by Thomson and Childish with 10 other artists (Sanchia Lewis became the 13th member in September during the first show). Founding artist started the Stuckist web site. In July 1999, the Stuckists were first mentioned in the media, in an article in "The Evening Standard" and quickly gained other coverage, helped by press interest in who had been nominated for the . They have continued to gain media coverage since.

The Stuckists have staged numerous exhibitions of their work, starting in September 1999 with "Stuck! Stuck! Stuck!" in Joe Crompton's Gallery 108 (now defunct) in Shoreditch, and "The Resignation of Sir Nicholas Serota". In 2000 they gained attention by staging "The Real Turner Prize Show" at the same time as the 's official version.

Thomson stood as a Stuckist candidate for the 2001 British General Election, in the constituency of Islington South & Finsbury, against Chris Smith, the then . He picked up 108 votes (0.4%). shop, JD Electrical Supplies. It was suggested Hirst may have seen this at the time and copied it, but that anyway Saunders was the real pioneering artist.

In 2003 they reported to the UK , complaining that he had an effective on art. The complaint was not upheld. [ [http://www.stuckism.com/Saatchi/SaatchiOFT.html "Charles Saatchi reported to OFT"] stuckism.com. Accessed May 27, 2006] In 2003, an allied group was founded by and . In 2005 the Stuckists offered a donation of 175 paintings from the Walker show to the Tate. This was rejected by the Tate Board of Trustees.

In August 2005 the Stuckists initiated a major controversy over the Tate's purchase of its trustee 's work "The Upper Room" for £705,000. [ [http://www.stuckism.com/Tate/Ofili.html "Tate buys trustee Chris Ofili's The Upper Room in secret £705,000 deal"] stuckism.com. Accessed May 27, 2006] In July 2006 the completed an investigation into The Tate's purchase of trustees' work, censuring the gallery for acting outside its legal powers. [Alberge, Dalya (2006) [http://entertainment.timesonline.co.uk/tol/arts_and_entertainment/article689514.ece "Tate's Ofili purchase broke charity law"] "The Times" online, July 19, 2006. Accessed April 8, 2007] Sir Nicholas Serota stated that the Stuckists had "acted in the public interest". [Front Row, BBC Radio 4, interview by Mark Lawson, July 25, 2006] In October 2006, the Stuckists staged their first exhibition, "Go West", in a commercial West End gallery, . This "major exhibition"

The Stuckists gained significant media coverage for seven years of protests (2000-2006) outside against the , sometimes dressed as clowns. In 2001 they demonstrated in at the unveiling of 's "Monument". In 2002, they carried a coffin marked "The Death of Conceptual Art" to the Gallery. [ [http://www.stuckism.com/Tate/WhiteCube.html "White Cube Demo 2002"] , stuckism.com. Retrieved .] [Cripps, Charlotte. [http://findarticles.com/p/articles/mi_qn4158/is_20040907/ai_n12797891 "Visual arts: Saying knickers to Sir Nicholas] , "", . Retrieved from findarticles.com, .] In 2004 outside the launch of "The Triumph of Painting" at the they wore tall hats with 's face on and carried placards claiming that Saatchi had copied their ideas. In 2005 they protested outside the Turner Prize against the purchase of Ofili's "The Upper Room".

Events outside Britain have included "The Clown Trial of President Bush" held in in 2003 to protest against the . has exhibited political and satirical collages in Turkey for which he has been arrested.

"The Stuckists Punk Victorian" was the first national gallery exhibition of Stuckist art. It was held at the and and was part of the 2004 . It consisted of over 250 paintings by 37 artists, mostly from the UK but also with a representation of international Stuckist artists from the US, Germany and Australia. There was an accompanying exhibition of Stuckist photographers. A book, "The Stuckists Punk Victorian", was published to accompany the exhibition.

"" journalist, , exhibited a painting of in the show, and was dismissed from her job.

An international symposium on Stuckism took place in October 2006 at the during the . The programme was led by , founder of the Liverpool Stuckists. There was an accompanying exhibition in the 68 Hope Gallery at Liverpool School of Art and Design (John Moores University Gallery).

Thomson's painting, "Sir Nicholas Serota Makes an Acquisitions Decision", is one of the best known paintings to come out of the Stuckist movement,

It depicts Sir Nicholas Serota, Director of the and the usual chairman of the Turner Prize jury, and satirises 's installation, "", consisting of her bed and objects, including , which she exhibited in 1999 as a Turner Prize nominee.

In April 2008, Charles Thomson submitted a petition to the prime minister's web site about Sir Nicholas Serota, but this was rejected as being “potentially libellous, false, or defamatory”, so he submitted it again with different wording. [ [http://www.counterpunch.org/thomson04122008.html My Petition to Gordon Brown - The British Prime Minister and the Tate's Tin of Shit.] Counter Punch, 12th April 2008] [ [http://www.timesonline.co.uk/tol/news/uk/article3716357.ece The Times, 10th April 2008] ] This was accepted, and is currently online with the text: "We the undersigned petition the Prime Minister to state that he will not give his approval to any reappointment of Sir Nicholas Serota as Director of the Tate gallery." [ [http://petitions.pm.gov.uk/tatedirector/ 10 Downing Street E-petitions, Submitted by Charles Thomson of Stuckists ] ] Charles Thomson said, "This is the first time in 20 years that the public have been given a chance to say what they think of Serota's policies of acquiring decaying sharks and tins of shit." Barry Fantoni is a signatory. [ [http://www.independent.co.uk/opinion/columnists/pandora/pandora-miliband-meets-his-match-814756.html The Independent, 24th April 2008]

In October 2000, founded the Stuckists, [http://www.liverpoolmuseums.org.uk/walker/exhibitions/stuckists/international/] the fourth Stuckist group to be started and the first one outside the UK. On , , he staged the "Real Turner Prize Show" at the Dead End Gallery in his home, concurrent with three shows with the same title in England (, Falmouth and ), and one in , in protest against the 's . Other Australian Stuckists include .

in 2000, founded the first US group The Pittsburgh Stuckists&mdash;the second group to be founded outside the UK. This was announced in the Pittsburgh Weekly ( ): "The new word in art is Stuckism. A Stuckist paints their life, mind and soul with no pretensions and no excuses." [http://www.stuckism.com/StuckistMediaAppearances.doc] By 2006 there were 21 US Stuckist groups. There have been Stuckist shows and demonstrations in the US, and American Stuckists have also exhibited in international Stuckist shows abroad. US Stuckists include , , , and .

The mainstay of the Stuckists has been in the UK, where by 2006 there were 63 groups. Artists include , Paul Harvey, , , Emily Mann, , , Peter Murphy, and . John Bourne opened Stuckism Wales at his home, a permanent exhibition of (mainly Welsh) paintings. A regular guest artist, . and are new affiliates.

A "Students for Stuckism" group was founded in 2000 by students from , who staged their own exhibition. S.P. Howarth was expelled from Camberwell college for his Stuckist work as stated in [http://www.stuckism.com/SPHowarth/TimesArticle.html#PicTop The Times newspaper] . He had the first solo at the Stuckism International Gallery in 2002, called "I Don't Want a Painting Degreeif it Means Not Painting",. Recent graduates who have joined the Stuckists include . An "Underage Stuckists" group was founded in 2006 with their own manifesto for teenagers by two 16 year olds, Liv Soul and Rebekah Maybury. [ [http://www.stuckism.com/Manifestos/UnderageStuckists.html "The Underage Stuckists Manifesto"] stuckism.com. Accessed April 25, 2006]

In 1999, two performance artists, , jumped on 's installation "My Bed", a work consisting of the artist's own unmade bed, at the 's , in an unauthorised . Chai had written, among other things, the words "Anti Stuckism" on his bare back. Fiachra Gibbons of "The Guardian" wrote that the event "will go down in art history as the defining moment of the new and previously unheard of Anti-Stuckist Movement."

The filmmaker released a manifesto declaring "The work should prove anti-Stuckist, genuinely post-modern, contingent and ad hoc in its thinking."

The London group issued a manifesto denouncing Stuckism as well as Young British Artists. They state that stuckism "is a childish kicking against modernity that fails, pathetically, to challenge the underlying realities of capitalism, of the capitalist art market, of material, psychological, psychic and spiritual repression." and also establish that even though Britart "stand squarely among our (their) enemies" because of its total functionality within the capitalist structure, nevertheless this shouldn´t mean opposing conceptual art since they say "is far from exhausted" [ [http://londonsurrealistgroup.wordpress.com/2006/04/12/coming-unstuck-tract-2-april-2004/ COMING UNSTUCK] ] .

*1999 Stuck! Stuck! Stuck!
*2000 The First Art Show Of the New Millennium
*2000 The Resignation of Sir Nicholas Serota
*2000 Students for Stuckism: A Remodernist Painting Show and Talk
*2000 Stuck!
*2000 The Real Turner Prize Show
*2001 The Stuckists: The First Remodernist Art Group
*2001 The Oxford Stuckists First Exhibition
*2001 Vote Stuckist
*2001 Stuck in Worthing
*2002 Stuck Up North!
*2002 I Don't Want a Painting Degree if it Means Not Painting
*2002 The First Stuckist International
*2003 The Stuckists Summer Show
*2003 Stuck in Worthing, Again
*2003 Stuck in Wednesbury
*2003 War on Blair
*2004 Members Only: the Artist Group in Contemporary Japan and Britain
*2004 Stuckist Classics
*2004 The Stuckists Punk Victorian
*2004 "Stigmata" or "Censorious": The Stuckists Punk Victorian
*2004 Stuck in the Country
*2004 Stuckist Punk Victorian Lite If You Can't Be Bothered to Go to Liverpool
*2004 More of the Welsh Bit of the Stuckists Punk Victorian
*2006 Go West
*2005 "Painting Is the Medium of Yesterday"&mdash;Paul Myners CBE, Chairman of Tate Gallery, Chairman of Marks and Spencer, Chairman of Aspen Insurance, Chairman of Guardian Media, Director of Bank of England, Director of Bank of New York. "A Show of Paintings by the Stuckists, as Refused by the Tate Gallery. Guaranteed 100% Free of Elephant Dung."
*2006 The Triumph of Stuckism
*2007 Mark D and the Stuckists vs Tracey Emin and Damien Hirst
*2007 I Won't Have Sex with You as long as We're Married [ [http://www.stuckism.com/AGalleryJuly07/IndexShow.html "I Won't Have Sex with You as long as We're Married" &mdash; images of the show] ]