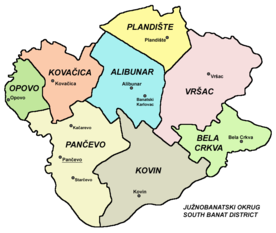 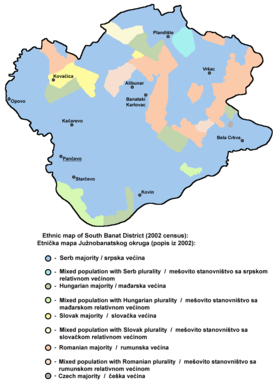 South Banat District (Serbian: Јужнобанатски округ, Južnobanatski okrug) is a northeastern district of Serbia with the seat of the district in Pančevo. It borders Romania to the east. The district lies in the region of Banat, in the autonomous province of Vojvodina. It has a population of 313,937 (2002).

It encompasses the following municipalities:

Most of the municipalities in the district have an ethnic Serb majority, while the municipality of Kovačica is ethnically mixed, with a relative Slovak majority (41%).

Pančevo is distinguished for its numerous cultural institutions: the National Library 'Veljko Vlahović', the Historic Archives, and the Institute for Protection of Culture Monuments.

In this modern, industrial region stand out the Pančevo Oil Refinery, the Azotara Fertilizers Plants, and the Pančevo Petrochemistry.

Note: All official material made by Government of Serbia is public by law. Information was taken from official website.