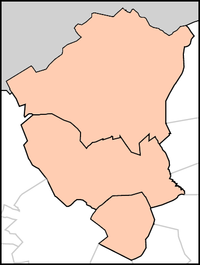 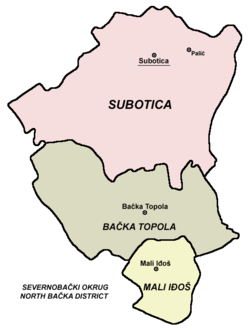 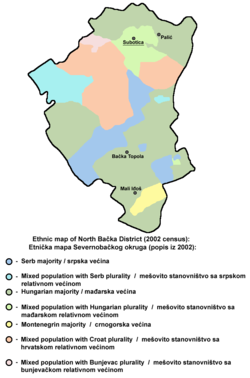 North Bačka District (Serbian: Севернобачки округ, Severnobački okrug; Hungarian: Észak-bácskai körzet; Croatian: Sjevernobački okrug; Slovak: Severobáčsky okres; Rusyn: Сивернобачки окрух; Romanian: Districtul Bacica de Nord) is a northern district of Serbia. It lies in the Bačka region in the autonomous province of Vojvodina. It has a population of 200,140. The seat of the district is Subotica.

The population of the district is ethnically mixed. According to the 2002 census data, it is composed of:

Languages spoken in the district:

As for local communities, 20 have Hungarian majority, 15 have Serb majority, 7 have Croatian/Bunjevci majority, 1 has a Montenegrin majority and 2 are ethnically mixed, with Hungarian relative majority.

Subotica is a multi-ethnic and multi-religious center; in addition to the major Roman Catholic and Serb Orthodox communities, there are nearly thirty other small-size religious communities in the town. The most remarkable religious buildings are the Cathedral of St Teresa of Avila from 1797, the Franciscan Monastery from 1723, the Orthodox Church from the 18th century, the Synagogue and Orthodox Church in Aleksandrovo, both from the 17th century.

In keeping with its very rich resources, the region's food processing industry is well developed. The best examples are "29 novembar" meat industry, "Pionir" Sweets Factory and "Fidelinka" bread and flour products factory. Subotica ranks among the leading communities in Serbia when it comes to crop (maize, wheat and sunflower) yields.

Note: All official material made by Government of Serbia is public by law. Information was taken from official website.