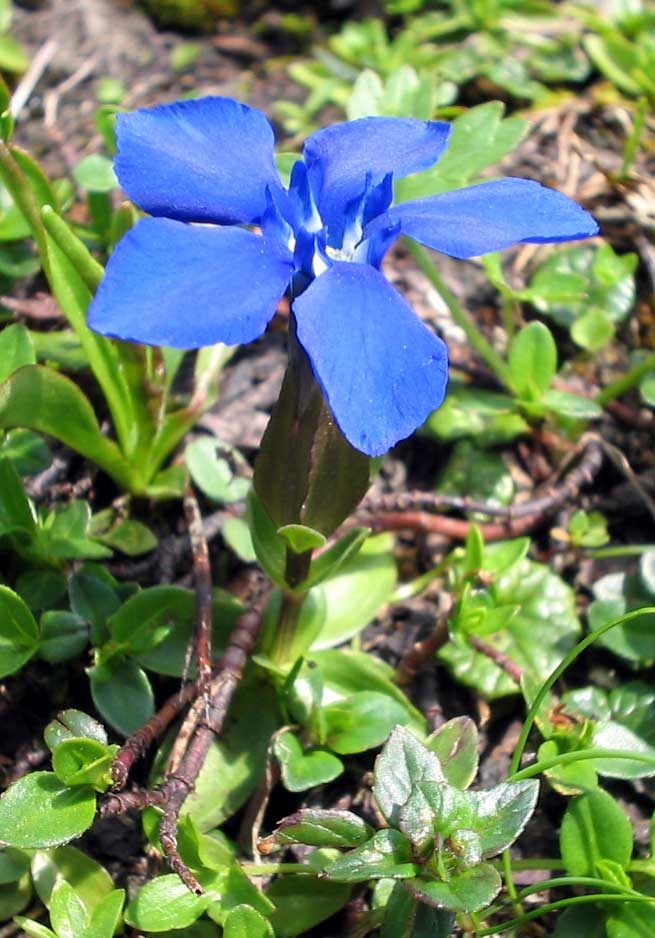 "Gentiana" is a genus of s belonging to the Gentian family (), tribe Gentianeae and monophyletic subtribe Gentianinae. This a large genus, with about 400 species.

This is a , occurring in alpine habitats of temperate regions of , and the . Some species also occur in northwest , eastern and . They consist of annual, biennial and perennial plants. Some are evergreen, others are not.

Gentians have opposite leaves that are sometimes arranged in a basal rosette, and trumpet-shaped s that are usually deep blue or azure, but may vary from white, creamy and yellow to red. Many species also show considerable polymorphism with respect to flower color. Typically, blue-flowered species predominate in the Northern Hemisphere, with red-flowered species dominant in the (where bird pollination is probably more heavily favored by natural selection). White-flowered species are scattered throughout the range of the genus but dominate in New Zealand. All gentian species have terminal tubular flowers and most are pentamerous, i.e. with 5 corolla lobes (s), and 5 s, but 4-7 in some species. The style is rather short or absent. The corolla shows folds (= plicae) between the lobes. The ovary is mostly sessile and has nectary glands.

Many gentians are difficult to grow outside their wild habitat, but several species are available in cultivation. Gentians are fully hardy and like full sun or partial shade, and neutral to acid soil that is rich in humus and well drained. They are popular in s.

According to , "Gentian" is an eponym of Gentius (180-168 BC), the King of , said to have discovered its healing properties. Some species are of medicinal use and their roots were harvested for the manufacture of tonic liquor, for instance in France "Suze" or similar liquors. Gentian is also used as a flavouring, for example in , and the "" which contains "Gentian Root Extractives".

*Gentian roots from the Auvergne region of are the basis for "Gentiane", an apéritif (). Varieties include "Suze", created since , at the "distillerie Rousseau, Laurens et Moureaux à Maisons-Alfort"; Ambroise Labounoux's "La Salers", made since 1885 at the "Distillerie de la Salers"; and "L´Avèze", created in 1929 in Auvergne. "Picon", made of equal parts gentian root and root with syrup and was created by Gaétan Picon, in , when he was stationed in with the French army. He returned to France in bringing with him the "first African apéritif."
*Gentian is mentioned in the ninth of 's .
*"Gentian" is the title of a short story by .
*"Bavarian Gentians" is the name of a poem by .
*It is mentioned multiple times in 's . Also, a character in the book is named Enzian, which is the German term for Gentian.
*Gentian root is a major flavor component in 's regionally popular soft drink .
*Poet has a poem entitled "To the Fringed Gentian."
*Used in Queen's University Engineering traditions.
*The Gentian is referenced in Emily Dickinson's poem number 442: "God made a little Gentian-// It tried- to be a Rose-"
*A character in the book by uses the name "The Purple Gentian" as his name while doing good deeds to prevent the invasion of England by Napoleon's army.