Disarmament is the act of reducing, limiting, or abolishing weapons. Disarmament generally refers to a country's military or specific type of weaponry. Disarmament is often taken to mean total elimination of weapons of mass destruction, such as nuclear arms. General and Complete Disarmament refers to the removal of all weaponry, including conventional arms.[1]

Disarmament can be contrasted with arms control, which essentially refers to the act of limiting arms rather than eliminating them. A distinction can also be made between disarmament as a process (the process of eliminating weapons), and disarmament as an end state (the absence of weapons). Disarmament has also come to be associated with two things:[citation needed]

Philosophically, disarmament may be viewed as a form of demilitarization; part of an economic, political, technical, and military process to reduce and eliminate weapons systems. Thus, disarmament may be part of a set of other strategies, like economic conversion, which aim to reduce the power of war making institutions and associated constituencies.

An example on the feasibility of the elimination of weapons is the policy of gradual reduction of guns in Japan during the Tokugawa shogunate. In two centuries, Japan passed from being the country with more guns per capita to producing (or importing) none.[citation needed]

In the early 1930s, US President Franklin D. Roosevelt sent this message to the World Disarmament Conference: "If all nations will agree wholly to eliminate from possession and use the weapons which make possible a successful attack, defences automatically will become impregnable and the frontiers and independence of every nation will become secure."[citation needed]

In 1961, US President John F. Kennedy gave a speech before the UN General Assembly where he announced the US "intention to challenge the Soviet Union, not to an arms race, but to a peace race - to advance together step by step, stage by stage, until general and complete disarmament has been achieved." He went on to call for a global general and complete disarmament, offering a rough outline for how this could be accomplished:

The program to be presented to this assembly - for general and complete disarmament under effective international control - moves to bridge the gap between those who insist on a gradual approach and those who talk only of the final and total achievement. It would create machinery to keep the peace as it destroys the machinery of war. It would proceed through balanced and safeguarded stages designed to give no state a military advantage over another. It would place the final responsibility for verification and control where it belongs, not with the big powers alone, not with one's adversary or one's self, but in an international organization within the framework of the United Nations. It would assure that indispensable condition of disarmament - true inspection - and apply it in stages proportionate to the stage of disarmament. It would cover delivery systems as well as weapons. It would ultimately halt their production as well as their testing, their transfer as well as their possession. It would achieve under the eyes of an international disarmament organization, a steady reduction in force, both nuclear and conventional, until it has abolished all armies and all weapons except those needed for internal order and a new United Nations Peace Force. And it starts that process now, today, even as the talks begin. In short, general and complete disarmament must no longer be a slogan, used to resist the first steps. It is no longer to be a goal without means of achieving it, without means of verifying its progress, without means of keeping the peace. It is now a realistic plan, and a test - a test of those only willing to talk and a test of those willing to act.[citation needed] 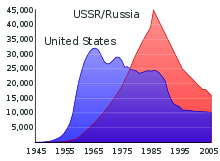 United States and USSR/Russian nuclear weapons stockpiles, 1945-2006. These numbers include warheads not actively deployed, including those on reserve status or scheduled for dismantlement. Stockpile totals do not necessarily reflect nuclear capabilities since they ignore size, range, type, and delivery mode.

Major nuclear disarmament groups include Campaign for Nuclear Disarmament, Greenpeace and International Physicians for the Prevention of Nuclear War. There have been many large anti-nuclear demonstrations and protests. On June 12, 1982, one million people demonstrated in New York City's Central Park against nuclear weapons and for an end to the cold war arms race. It was the largest anti-nuclear protest and the largest political demonstration in American history.[3][4]

The political and economic barriers to disarmament are considerable, mostly based on the concentrated power of those supporting militaristic approaches to foreign policy. One key barrier is ideological. Many foundations and universities have failed to support research in disarmament, instead favoring more ad hoc and limited approaches like arms control, conflict resolution, and limits on weapons systems in specific countries. Part of this may be pragmatism, but often it is the result of a limited understanding of the history of disarmament (see References below).[citation needed] Attempts to restrict nuclear proliferation are of course a necessity. Bolstering these efforts would be assisted by checking the link between military intervention and nuclear proliferation. Many countries fearful of being invaded, particularly by the U.S., have tried to secure or develop nuclear weapons. As a result, policies to limit military interventions may be part of a larger demilitarization program.

In his definition of "disarmament", David Carlton writes in the Oxford University Press Political dictionary, "But confidence in such measures of arms control, especially when unaccompanied by extensive means of verification, has not been strengthened by the revelation that the Soviet Union in its last years successfully concealed consistent and systematic cheating on its obligations under the Biological Weapons Convention." He also notes, "Now a freeze or a mutually agreed increase is not strictly speaking disarmament at all. And such measures may not even be intended to be a first step towards any kind of reduction or abolition. For the aim may simply be to promote stability in force structures. Hence a new term to cover such cases has become fashionable since the 1960s, namely, arms control."[5]