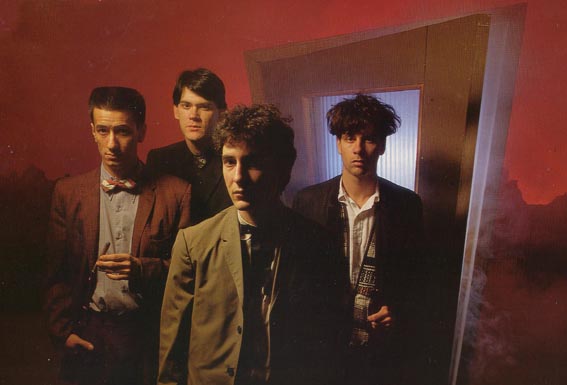 Wall of Voodoo was a new wave group from Los Angeles best known for the hit "". The band had a sound that was a fusion of synthesizer-based with the soundtrack style of .

Wall of Voodoo had its roots in Acme Soundtracks, an unsuccessful business started by , later the vocalist and synth player for Wall of Voodoo. Acme Soundtracks office was across the street from the punk club and Ridgway was soon drawn into the emerging punk/new wave scene. , guitarist for The Skulls began jamming with Ridgway at the Acme Soundtracks office and the soundtrack company morphed into a New Wave band. [http://www.montereycountyweekly.com/issues/Issue.07-21-2005/music/Article.clubs_feature] In 1977, with the addition of Skulls members Bruce Moreland (Marc Moreland's brother) as bassist and Chas T. Gray as keyboardist, along with , who had been the drummer for Black Randy and the Metrosquad, the first lineup of Wall of Voodoo was born. [http://www.allmusic.com/cg/amg.dll?p=amg&sql=11:6q6tk6hx9kra~T1]

The band was named Wall of Voodoo before their first gig in reference to a comment made by [http://www.noncredo.com/biographies/berardi.html Joe Berardi] , a friend of Ridgway's. Berardi was listening to some of the Acme Soundtracks music Ridgway and Moreland had created in their studio. When Ridgway jokingly compared the multiple-drum-machine- and -organ-laden recordings to Phil Spector's , Berardi commented it sounded more like a "wall of voodoo", and the name stuck.

Wall of Voodoo released a self-titled in 1980 which featured a unique, synthesizer-driven cover of the song, "Ring of Fire". The band's first full-length album, "Dark Continent" followed in 1981. Bruce Moreland left the band for the first time soon after this, and Chas Gray performed on both bass and keyboard during this time. The band recorded their biggest-selling album, "" in 1982. The track "" was their only Top 100 hit and the video for the song got a great deal of exposure on the newly-formed . Bill Noland was added as a keyboardist soon after the release of this album. [http://www.allmusic.com/cg/amg.dll?p=amg&sql=11:6q6tk6hx9kra~T1]

Stan Ridgway claims that the situation around the band was increasingly chaotic at the time, with a great deal of drug use and out-of-control behavior on the part of the band members, as well as shady behavior by the band's management and . Wall of Voodoo appeared at the second on May 28, 1983 (the largest concert the band had performed), immediately after which Ridgway, Nanini, and Noland all left the band. [http://www.montereycountyweekly.com/issues/Issue.07-21-2005/music/Article.clubs_feature] Stan Ridgway soon went on to a successful solo career, appearing as guest vocalist on a track on the "" score and releasing his first in 1986. Joe Nanini soon resurfaced in the band Lonesome Strangers.

The remainder of the band, Marc Moreland, Chas T. Gray, and a returning Bruce Moreland carried on under the name Wall of Voodoo. Soon after, , formerly of the San Francisco New Wave band Eye Protection, joined as singer and Ned Lukhardt was added as drummer. The band continued to record and perform under this lineup until 1988, though their sound was very different from the style of music they played in the earlier Stan Ridgway-fronted lineup. In 1988, they split up and Andy Prieboy and Marc Moreland went on to solo careers. During this period, the entire membership of Wall of Voodoo (with the exception of Andy Prieboy) were also members of , a lineup that was nicknamed "Wall of Gender". [http://www.nervousgender.com/wallofgender.htm]

Stan Ridgway, Andy Prieboy, and Marc Moreland were all active and performing as solo artists during the 1990s and 2000s. Joe Nanini released an EP under the name Sienna Nanini-Bohica in 1996. Two former members died within a few years of each other in the early 2000s; Joe Nanini died of a brain hemorrhage on December 4, 2000 and Marc Moreland died of kidney and on March 13, 2002.

In 2006, a Stan Ridgway-fronted Wall of Voodoo performed at the in Orange County as an opening band for , however, other than Ridgway, none of the surviving Wall of Voodoo members were included in this lineup. Ridgway/Wall of Voodoo were due to tour nationally in Summer 2007.Fact|date=October 2007