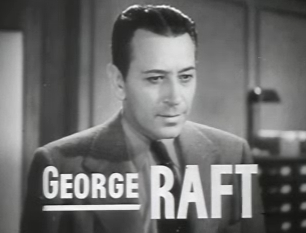 Initially interested in dancing, as a young man he showed great aptitude, and this, combined with his elegant fashion sense, allowed him to work as a dancer in some of New York City's most fashionable nightclubs. He became part of the stage act of and his success led him to Broadway where he again worked as a dancer. He worked in as a chorus boy at some time in the early 20s.

Vi Kearney, later to be a star dancer in shows for Charles Cochran and Andre Charlot, was quoted as saying:

"Oh yes, I knew him (George Raft). We were in a big show together. Sometimes, to eke out our miserable pay, we'd do a dance act after the show at a club and we'd have to walk back home because all the buses had stopped for the night by that time. He'd tell me how he was going to be a big star one day and once he said that when he'd made it how he'd make sure to arrange a Hollywood contract for me. I just laughed and said: 'Come on, Georgie, stop dreaming. We're both in the chorus and you know it.' [Did he arrange the contract?] Yes. But by that time I'd decided to marry... [Was he (Raft) ever your boyfriend?] How many times do I have to tell you ...chorus girls don't go out with chorus boys."

In the early 1930s nearly died following a 5-hour for an advanced case of she claimed she got from Raft. Only 70 pounds when she was able to leave the hospital, she stoically said to her doctor, "Don't think this has taught me a lesson!"

In 1929 Raft moved to and took small roles. His success came in "Scarface" (1932), and Raft's convincing portrayal led to speculation that Raft himself was a gangster. He was a close friend of several top organized crime figures, including , and Siegel's suspected killer, . Raft was considered one of 's most dapper and stylish dressers and he achieved a level of celebrity not entirely commensurate with the quality or popularity of his films; Raft became a pop culture icon in the 1930s matched by few other film stars.

He was definitely one of the three most popular gangster actors of the 1930s, along with and ( never matched Raft's stardom during that decade). Raft and Cagney worked together in "" (1939) as fellow convicts in prison. His 1932 film "" launched the movie career of with a supporting part as well as providing Raft's first leading role (Raft and West would die within two days of each other 48 years later and their corpses would wind up in the same morgue at the same time.) Raft appeared the following year in 's turn of the century period piece "The Bowery" as Steve Brodie, the first man to jump off the Brooklyn Bridge and survive, with , , , and .

1940-41 proved to be Raft's career height. He went into a period of decline over the next decade and achieved an unenviable place in Hollywood folklore as the actor who turned down some of the best roles in screen history, most notably "High Sierra" (he supposedly didn't want to die at the end) and "" (he didn't want to remake the superb 1931 pre-code version of "The Maltese Falcon" with a rookie director); both roles transformed from a supporting player into a major force in Hollywood in 1941. Raft was also reported to have turned down Bogart's role in "Casablanca" (1942), although this story is probably apocryphal.

Approached by director , he refused the lead role in "Double Indemnity" (1944), which led to the casting of in a towering classic that would have undoubtedly revived Raft's career. His lack of judgment (probably grounded in the fact that he was more or less illiterate, which made judging scripts even more problematic than usual), combined with the public's growing distaste for his apparent gangster lifestyle, effectively ended his career as a leading man in mainstream movies. He satirized his gangster image with a well-received performance in "" (1959), but this did not lead to a comeback (probably due to his age by that point) despite being billed fourth under , , and in a comedy classic, and he spent the remainder of the decade making films in Europe. He played a small role as a casino owner in "Ocean's Eleven" (1960) opposite the . His final film appearances were in "" (1978) with in an amusing cameo (West: "Why George Raft, I haven't seen you in 20 years. What have you been doing?" Raft: "Oh, about 20 years!") and "" (1980).

, in his autobiography "Steps in Time" (1959), mentions that Raft was a lightning-fast hoofer.

Raft died from , aged 85, in on November 24th, 1980 and was interred in Forest Lawn - Hollywood Hills Cemetery in Los Angeles. Only two days before, his old co-star had died. Their bodies were at the same mortuary at the same time for an eerie posthumous reunion.

In the 1991 biographical movie "", the character of George Raft was played by .

George Raft has two stars on the for his contributions to Motion Pictures, at 6150 Hollywood Boulevard, and for Television at 1500 Vine St.