The New York City Subway is a large rapid transit system and has a large fleet of rolling stock.

As of June 2011, there are 6,292 cars on the NYCT roster.[1] Train assignments can be found here:[2][3] A typical revenue train consists of 8 to 11 cars, although shuttles can be as short as two, and can range from 150 to 600 feet (45.72 to 182.88 m) long. As a general rule, trains on A Division lines inherited from the IRT (designated with numbers, plus the 42nd Street Shuttle) are shorter and narrower than those that operate on B Division lines inherited from BMT/IND (designated with letters). The A Division and B Division trains operate only in their own division; operating in the other division is not allowed. This is mainly because the IRT sections have narrower tunnel segments, tighter curves, and tighter platform clearances than the BMT/IND sections. IRT Division trains would have an unacceptably large gap between the platform and train if they were allowed in the BMT/IND Division. Likewise, BMT/IND trains would not fit in the IRT tunnels and stations. The safety train stop (trip cock) mechanism between divisions is also incompatible, being located on opposite sides of the track and train in each division. Service and maintenance trains are composed of IRT sized cars, do not carry passengers, and can operate on either division as the safety train stop is built on both sides of the trucks.

Cars purchased by the City of New York since the inception of the IND and for the other divisions beginning in 1948 are identified by the letter "R" followed by a number; e.g.: R32. This number is the contract number under which the cars were purchased. Cars with nearby contract numbers (e.g.: R1 through R9, or R21 through R36 WF, or R143 through R160B) may be virtually identical, simply being purchased under different contracts.

When the Brooklyn Rapid Transit Company entered into agreements to operate some of the new subway lines, they made the decision to design a new type of car, 10 feet (3.05 m) wide and 67 feet (20.42 m) long, the subject of several patents, whose larger profile was more similar to that of steam railroad coaches, permitting greater passenger capacity, more comfortable seating and other advantages. The BRT unveiled its design, designated BMT Standard, to the public in 1913 and received such wide acceptance that all future subway lines, whether built for the BRT, the IRT or eventually, the IND, were built to handle the wider cars.

When the R44s and R46s were rebuilt, the rollsigns on the side of the cars were replaced with electronic LCD signs while the front service sign remained as a rollsign. In sharp contrast, the rebuilt R32s and R38s retained rollsigns on the sides, but a digital light display was placed in the front. The MTA has been incorporating newer subway cars into its stock in the past decade. Since 1999, the R142s, R142As, R143s, R160As, and R160Bs have been added into service.[4][5] All cars built since 1992, (including the now out-of-service R110As and R110Bs) are equipped with digital signs on the front, sides, and interior (except for the R110B, which has rollsigns on the front).

Old cars, some from the original companies (IRT and BMT), are preserved at the New York Transit Museum, while others have been sold to private individuals, rail and trolley museums. Between 1984 and 1989 some of the IRT trains were painted red, giving them the name Redbirds. Since then, all of these cars have been replaced by more modern subway trains (R142/R142As) between 2000 and 2005. As of July 2010, many older BMT/IND cars (R32, R38, R40, R40A/M, R42, and R44) have been retired and replaced with the R160s.

The General Overhaul Program (GOH) was a mid-life overhaul program for neglected subway cars which involved thorough rebuilding of the fleet. Recently, the new Scheduled Maintenance System (SMS) program has replaced the GOH program by ensuring that trains do not reach a state in which they would need such an overhaul. The car types which were part of the MTA NYCT GOH program are the IRT Redbirds (R26, R28, R29, R33, R33 WF, R36, R36 WF), as well as IND/BMT cars (R30 GE, R32, R38, R40, R40A, R40M, R42, R44 and R46). These cars were rebuilt between 1985 and 1992. Some cars in various classes from R10 to R46 were also given lighter overhauls during this period.

The New York City Board of Transportation settled on a system of documentation that is still in place under MTA New York City Transit. This included a prefix letter or letters that indicated the Department that the specific documentation, followed by a series of numbers of a length defined by the specific department concerned. For example, the Surface Department used the letter "S", while the Rapid Transit Department used the letter "R". A new R number is assigned for any vehicle purchase involving a bidding process. Since the 1970s the system has suffered from "R inflation" going through only 46 R numbers in its first 40 years, but over 114 in its subsequent 30. Possible reasons include an increased number of specialized maintenance vehicles that were previously made in house or a lower floor for requiring a formal bidding process in order to reduce waste and abuse. 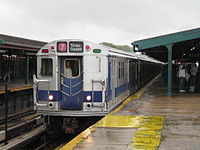 The "Train of Many Colors" makes another appearance on the #7 train in 2008, commemorating the last game at Shea Stadium