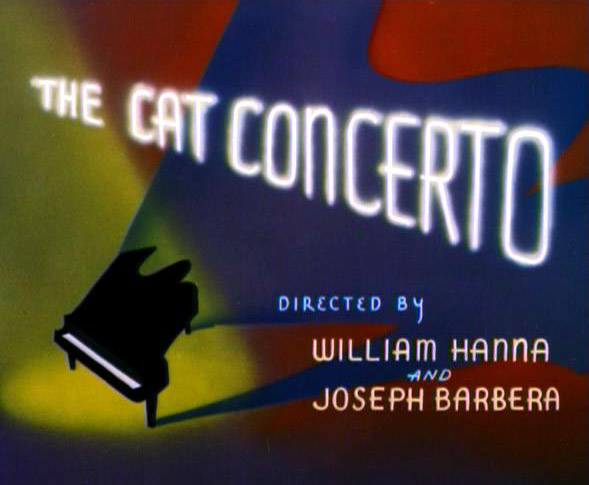 "The Cat Concerto" is a 1946 one-reel and is the 29th "" short, produced in in 1946 and released to theatres on by . It was produced by and directed by and , with musical supervision by , and animation by Kenneth Muse, Ed Barge and Irven Spence. It won the . In 1994 it was voted #42 of the of all time by members of the animation field.

The plot centres on a formal , where Tom, a piano virtuoso, is giving a piano recital of "" by . Jerry, who has been asleep inside the piano, is rudely awakened by the hammers, then sits on top of the to mock the cat by "conducting" him. Tom cannot abide this, and flicks Jerry off the piano. All the while, Tom continues playing without any interruptions.

Now Jerry arises from under one of the keys. Tom hammers down on the key, while Jerry runs back and forth underneath. As Tom lifts his paws from the keys, the piano continues playing. He looks over the edge of the piano and spots Jerry playing the felts from inside. Tom knocks the rodent out with a tuning tool. Jerry gets revenge by slamming the piano lid onto Tom's fingers, flattening them. But he resumes playing, as Jerry attempts to chop off the cat's fingers with a pair of scissors. When this fails, he substitutes a for some of the keys. Tom's finger does get caught and swells to ballooning proportions.

Jerry prances up and down on the piano, upon which Tom climbs and proceeds to play - with his feet. As Tom gets back down to play with his fingers, Jerry dances around on the felts, changing the tune from the Rhapsody to "." Tom snatches Jerry in his fist and throws him into the piano stool. Jerry crawls out of an opening and manipulates the seat's controls, cranking it up, and then sending it crashing down.

Still playing, Tom stuffs Jerry into the felts. The felts take on a life of their own, bashing Jerry about, spanking him, and squashing him to and fro. Jerry manages to break off some felts and play them on the strings. He plays faster and faster, so that Tom simply cannot keep up. No longer in control of the piano, Tom tries to keep up appearances but collapses in exhaustion after finishing the tune.

And of course, Jerry takes all the applause and credit for himself.

The same year MGM produced "The Cat Concerto", released a nearly identical cartoon entitled "". Directed by , "Rhapsody Rabbit" featured opposite an unnamed mouse. Both shorts had very similar plots, and even use the same classical piece by .

Both MGM and Warner Bros. accused each other of , after both films were shown during the 1947 Academy Awards ceremony. was accused of sending a print of either cartoon to the competing studio, who then allegedly plagiarized their rival's work. Ironically, Warner's current parent now owns the "Tom and Jerry" cartoons as well. This controversy was the subject of an episode on the documentary show "".

* [http://www.hatii.arts.gla.ac.uk/MultimediaStudentProjects/97-98/9403359w/concerto/cartoon2.htm The Cat Concerto] , a section of Nicola Watts' "Cartoons and Music" 1997 Multimedia Analysis and Design project at the Humanities Advanced Technology and Information Institute (HATII) at the University of Glasgow.
* [http://www.gimpelmusicarchives.com/catconcerto.htm Peter Gimpel, son of Jakob Gimpel explaining everything between the controversy]