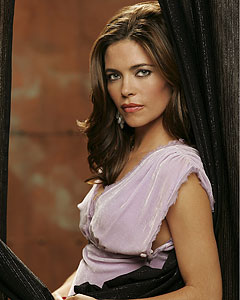 Victoria 'Vicki' Nicole Newman Hellstrom is a from the American "". The role is currently played by since March 2005, and was previously played by , who won two s for the role.

Victoria inherited her father's business skills and spirit and has been very successful at .

Starting mid-November of 2007, Victoria was in a coma due to injuries sustained in a building collapse. On January 29, Victoria awoke from her coma and soon after married Jeffrey Todd "J.T." Hellstrom, with whom she shares son Reed Hellstrom.

When the teenager Victoria returned from in 1991, she began working in the mail room at Newman Enterprises and set her sights on the somewhat-older (). Victor, unhappy about his daughter's involvement with the older man, attempted to pay him to leave town. Ryan refused Victor's offer and eloped with Victoria. Their marriage didn't last long, as Ryan left Victoria for ().

Victoria and Ryan later fell in love again and planned to marry. However, on the day of the wedding, Ryan's psychotic ex-wife Tricia () kidnapped and tied up Victoria and arrived at the ceremony dressed in a wedding gown identical to Victoria's, begging him for a second chance. Meanwhile, Victor rescued Victoria, and when she arrived at the chapel, Tricia produced a and fired a shot at her. Ryan jumped in front of Victoria and took the bullet, saving Victoria's life but being killed himself, leaving Victoria alone and devastated.

After her initial divorce from Ryan, Victoria fell in love with Charles "Cole" Howard (). They eloped, but Victor was then forced to break the news that Cole's mother Eve (Margaret Mason) had told Victor that Cole was his son. Believing they were brother and sister, Cole and Victoria annulled the marriage. However, blood tests then revealed that Cole was not Victor's son after all, so he and Victoria remarried. Eventually Cole left Victoria for (played at the time by ). Soon after, Victoria discovered she was pregnant with Cole's baby. Their daughter, Eve, (named after Cole's mother) lived only a very short time after birth.

Neil () was the first person to whom Victoria confessed that she was pregnant. Victoria and Neil became engaged and planned to raise the child together. They broke off the engagement when the child, a girl they had named Eve after Cole's mother, died shortly after birth. It should be noted that Victoria's romance with Neil, a rare coupling on "Y&R", proved controversial, with receiving many letters from viewers. They remain fond of each other to this day.

Victoria developed an attraction to Gary Dawson (), a shy marketing expert, who turned out to be a stalker whose bedroom walls were plastered with her photos, including a nude centerfold she had posed for years ago. Victoria discovered the disturbing collage on his wall, and ended up being kidnapped by Gary and held hostage in the long-abandoned Newman children's treehouse. Nick and Paul () rescued her, and Gary was put in a mental institution.

In 2002, Victoria began feigning an interest in ranch hand Diego Guittierez () in order to find out whether or not he had been sleeping with Nick's wife, Sharon (). However, she eventually developed actual feelings for him and they began a relationship. Victor, having found out that Diego had slept with Sharon, paid him to leave town, infuriating Victoria. When Diego was beat up by two thugs, who also took the $100,000 given to him by Victor, Victoria tracked him down at the hospital and they reunited. Diego became consumed with revenge against the thugs who beat him up. Victoria did not like this new vengeful side to Diego, so she ended the relationship.

Victoria and Michael began to grow close in mid-2003. They fell in love, but Victoria left Michael - and Genoa City - in October, when family problems became too much for her to handle. Victoria was not seen or heard from in well over a year, and when she returned to town in March 2005, she arrived at Michael's doorstep expecting to pick up where they left off. Michael informed her that he was now married to Lauren Fenmore (Tracey Bregman), and Victoria bowed out gracefully.

Victoria started dating Brad () in 2005 and they married in April 2006. She became pregnant with his child but lost it shortly thereafter. Victoria has since discovered that Brad had a one-night stand with Sharon shortly after they married. Victoria and Brad divorced. Victoria became pregnant shortly after deciding to divorce Brad, and was unsure of the paternity of the child- it could have been fathered by Brad or J.T. It was later revealed that the baby was J.T.'s.

Victoria turned to J.T. () whenever there was a problem in her relationship with Brad. The pair shared two one-night stands; the first in early 2006, before her marriage to Brad, and the second in April 2007. Victoria became pregnant with a son that could have been fathered by Brad or J.T. Victoria and J.T. became engaged in October 2007. Days later, a heavily pregnant Victoria was left comatose after being hit by a falling piece of rock during the Clear Springs explosion. Her baby (a very premature baby boy) was delivered via C-section, and is doing well. Victoria is now being cared for at the Newman Ranch. After a long wait and a few arguments between Brad and JT, it was announced that JT was the father of Victoria's baby. While Victoria was still comatose, J.T. named the baby boy "Reed Hellstrom" after Nikki's maiden name, and because a reed is strong, and bends with the wind.JT brings the baby home to Victoria. She awoke from her coma and remembers she is about to marry JT. When she woke up she thought her child had died, but Reed is very much alive and is near her bed. Victoria and J.T. got married in February 2008 as she successfully took on a 4th husband.

In August 2008, the Board of Directors of Newman Enterprises voted her Acting CEO in her father's absence, much to Victor Jr.'s chagrin.
was Made Of