Llewelyn was born in Newport, Wales, the son of Mia (née Wilkinson) and Ivor Llewelyn,[5] who was a coal mining engineer. He originally wanted to be a minister, but during his education at Radley public school, he worked as a stagehand in the school's productions and occasionally picked up small roles.

He was brought up in Blan-y-Pant house situated on Bettws Lane, Bettws.[disambiguation needed

] The house is now used as a care home for the elderly.

The outbreak of World War II in September 1939 halted his acting career; Llewelyn was commissioned as a second lieutenant in the British army, serving with the Royal Welch Fusiliers. In 1940, he was captured by the German army in France, and was held as a POW for five years.

Llewelyn was chosen for the role of Q because of his work with director Terence Young in the 1950 war film They Were Not Divided, in which he played a tank gunner. Beginning with From Russia with Love in 1963, Llewelyn appeared as Q, the quartermaster of the MI6 gadget lab (also known as Q branch), in almost every Bond film until his death (17), only missing an appearance in Live and Let Die in 1973. 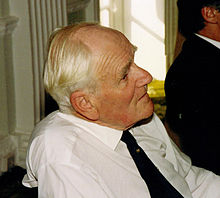 His last appearance as Q prior to his death was in The World Is Not Enough in 1999. During his briefing of 007 in the film, Q introduces John Cleese's character, R, as his heir presumptive, and the film alludes to Q's retirement—which Bond, after seeing Q, expresses his hope that it will not be any time soon. Q's response is to admonish Bond to "always have an escape plan", after which he lowers himself through the floor of his lab. Llewelyn had stated not long before his death that he had no plans to retire and that he would continue playing Q "as long as the producers want me and the Almighty doesn't."[6]

In the 2002 film Die Another Day, John Cleese's character is the head of Q branch, having inherited the title of quartermaster from his predecessor. In all, Llewelyn appeared in 17 Bond films, more than any other actor, and worked with the first five James Bond actors. He also portrayed Q in a 1967 EON-produced made-for-television special entitled "Welcome to Japan, Mr. Bond", which was included in the 2006 special edition DVD release of You Only Live Twice.

Although one of British cinema's most recognisable characters and an important and long-standing element in the 'Bond' franchise, 'Q' did not make Desmond Llewelyn rich—the actor was merely paid 'by the day' for his few hours of work on-set, and did not share in the money made by the films. Nevertheless, because Llewelyn was considered one of the franchise's major institutions and he was immensely popular among Bond fans, Llewelyn starred in several commercials, most recently to promote the video games GoldenEye 007 and Tomorrow Never Dies.

Llewelyn appeared in other films such as the Ealing comedy The Lavender Hill Mob (1951) and the 1981 PBS production of Dr. Jekyll and Mr. Hyde, and he had a small role in the musical Chitty Chitty Bang Bang (1968) which was itself based on a children's book by Bond author Ian Fleming. In 1961 he made an uncredited cameo who appears early on as one of the Marques’s servants in the Hammer Film Productions of The Curse of the Werewolf. He also acted on stage with Laurence Olivier and Vivien Leigh (appearing as an extra in Olivier's 1948 film Hamlet) and appeared as Geoffrey Maddocks ('The Colonel') in the British television series Follyfoot from 1971 to 1973. The Bond film Live and Let Die was filmed during the third series of Follyfoot and Llewellyn was written out of the series for three episodes to appear in the film. However, the Bond producers ultimately decided to leave the character out of the film anyway, much to Llewellyn's annoyance.[7]

Contrary to his gadget-expert character in the Bond films, Llewelyn always maintained that he was totally lost in the world of technology, a trait that also plagued his successor, John Cleese.

Aged 85, Llewelyn was in a fatal car accident on 19 December 1999, as he was returning home from a book signing event. Driving alone, his Renault Megane collided head-on with a Fiat Bravo driven by a 35-year-old man on the A27 near the village of Berwick, East Sussex. Despite attention from a doctor called to scene and transfer by helicopter to Eastbourne District General Hospital he died shortly thereafter. The other driver was seriously injured.[8] The following Monday, Llewelyn was due to sign copies of "Q: The Biography of Desmond Llewelyn" at Forbidden Planet in New Oxford Street, central London. Roger Moore, who starred with Llewelyn in six Bond movies, spoke at his funeral.