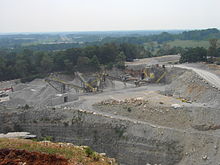 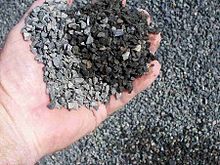 10 mm graded crushed rock or aggregate, for use in concrete. Called "blue metal" in Australia. 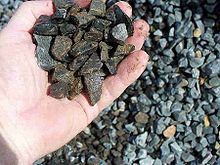 Construction aggregate, or simply "aggregate", is a broad category of coarse particulate material used in construction, including sand, gravel, crushed stone, slag, recycled concrete and geosynthetic aggregates. Aggregates are the most mined material in the world. Aggregates are a component of composite materials such as concrete and asphalt concrete; the aggregate serves as reinforcement to add strength to the overall composite material. Due to the relatively high hydraulic conductivity value as compared to most soils, aggregates are widely used in drainage applications such as foundation and French drains, septic drain fields, retaining wall drains, and road side edge drains. Aggregates are also used as base material under foundations, roads, and railroads. In other words, aggregates are used as a stable foundation or road/rail base with predictable, uniform properties (e.g. to help prevent differential settling under the road or building), or as a low-cost extender that binds with more expensive cement or asphalt to form concrete.

The American Society for Testing and Materials publishes an exhaustive listing of specifications for various construction aggregate products, which, by their individual design, are suitable for specific construction purposes. These products include specific types of coarse and fine aggregate designed for such uses as additives to asphalt and concrete mixes, as well as other construction uses. State transportation departments further refine aggregate material specifications in order to tailor aggregate use to the needs and available supply in their particular locations.

Sources for these basic materials can be grouped into three main areas: Mining of mineral aggregate deposits, including sand, gravel, and stone; use of waste slag from the manufacture of iron and steel; and recycling of concrete, which is itself chiefly manufactured from mineral aggregates. In addition, there are some (minor) materials that are used as specialty lightweight aggregates: clay, pumice, perlite, and vermiculite.

People have used sand and stone for foundations for thousands of years. Significant refinement of the production and use of aggregate occurred during the Roman Empire, which used aggregate to build its vast network of roads and aqueducts. The invention of concrete, which was essential to architecture utilizing arches, created an immediate, permanent demand for construction aggregates.

The advent of modern blasting methods enabled the development of quarries, which are now used throughout the world, wherever competent bedrock deposits of aggregate quality exist. In many places, good limestone, granite, marble or other quality stone bedrock deposits do not exist. In these areas, natural sand and gravel are mined for use as aggregate. Where neither stone, nor sand and gravel, are available, construction demand is usually satisfied by shipping in aggregate by rail, barge or truck. Additionally, demand for aggregates can be partially satisfied through the use of slag and recycled concrete. However, the available tonnages and lesser quality of these materials prevent them from being a viable replacement for mined aggregates on a large scale. 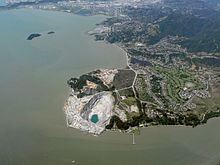 Over 1 million tons annually are mined from this quarry near San Francisco.[1]

Currently, total U.S. aggregate demand by final market sector was 30%-35% for non-residential building (offices, hotels, stores, manufacturing plants, government and institutional buildings, and others), 25% for highways, and 25% for housing.[2]

Glass aggregate, a mix of colors crushed to a small size, is substituted for many construction and utility projects in place of pea gravel or crushed rock, oftentimes saving municipalities like the City of Tumwater, Washington Public Works, thousands of dollars (depending on the size of the project). Glass aggregate is not sharp to handle. In many cases, the state Department of Transportation has specifications for use, size and percentage of quantity for use. Common applications are as pipe bedding--placed around sewer, storm water or drinking water pipes to transfer weight from the surface and protect the pipe. Another common use would be as fill to bring the level of a concrete floor even with a foundation. Use of glass aggregate helps close the loop in glass recycling in many places where glass cannot be smelted into new glass.[3]

Aggregates themselves can be recycled as aggregates. Unlike deposits of sand and gravel or stone suitable for crushing into aggregate, which can be anywhere and may require overburden removal and/or blasting, "deposits" of recyclable aggregate tend to be concentrated near urban areas, and production from them cannot be raised or lowered to meet demand for aggregates. Supply of recycled aggregate depends on physical decay of structures and their demolition. The recycling plant can be fixed or mobile; the smaller capacity mobile plant works best for asphalt-aggregate recycling. The material being recycled is usually highly variable in quality and properties.

Many geosynthetic aggregates are also made from recycled materials. Being polymer based, recyclable plastics can be reused in the production of these new age of aggregates. For example, Ring Industrial Group's EZflow[4] product lines are produced with geosynthetic aggregate pieces that are more than 99.9% recycled polystyrene. This polystyrene, that would have otherwise been destined for a landfill, is instead gathered, melted, mixed, reformulated and expanded to create low density aggregates that maintain high strength properties while under compressive loads. Such geosynthetic aggregates replace conventional gravel while simultaneously increasing porosity, increasing hydraulic conductivity and eliminating the fine dust "fines" inherent to gravel aggregates which otherwise serve to clog and disrupt the operation of many drainage applications.

Recycled aggregate production in the UK

Recycled aggregate in the UK is defined as aggregate resulting from the processing of inorganic material previously used in construction. To ensure the aggregate is inert, it is manufactured from material tested and characterised under European Waste Codes.[5]

In 2008, 210 million tonnes of aggregate were produced in the UK of which 67 million tonnes was recycled product, according to the Quarry Products Association (QPA).[6] The Waste and Resource Action Programme (WRAP)[7] has produced a Quality Protocol for the regulated production of recycled aggregates.[8] The recycled aggregate is delivered with documentation that states it has been produced using a quality assured system for the manufacturing process to ensure an aggregate that conforms to the relevant European standards.[9]