Sodium hydroxide (NaOH), also known as lye and caustic soda, is a caustic metallic base. It is used in many industries, mostly as a strong chemical base in the manufacture of pulp and paper, textiles, drinking water, soaps and detergents and as a drain cleaner. Worldwide production in 2004 was approximately 60 million tonnes, while demand was 51 million tonnes.[1]

Pure sodium hydroxide is a white solid available in pellets, flakes, granules, and as a 50% saturated solution. It is hygroscopic and readily absorbs carbon dioxide from the air, so it should be stored in an airtight container. It is very soluble in water with liberation of heat. It also dissolves in ethanol and methanol, though it exhibits lower solubility in these solvents than does potassium hydroxide. Molten sodium hydroxide is also a strong base, but the high temperature required limits applications. It is insoluble in ether and other non-polar solvents. A sodium hydroxide solution will leave a yellow stain on fabric and paper.

Sodium hydroxide reacts with protic acids to give water and the corresponding salts. For example, with hydrochloric acid, sodium chloride is formed:

In general such neutralization reactions are represented by one simple net ionic equation:

This type of reaction with a strong acid releases heat, and hence is referred to as exothermic. Such acid-base reactions can also be used for titrations. However, sodium hydroxide is not used as a primary standard because it is hygroscopic and absorbs carbon dioxide from air.

Sodium hydroxide reacts readily with carboxylic acids to form their salts and is even a strong enough base to form salts with phenols. It is not, however, strong enough to quantitatively produce enolates from carbonyl compounds or deprotonate amines; this would require a superbase.

Sodium hydroxide also reacts with acidic oxides, such as sulfur dioxide. Such reactions are often used to "scrub" harmful acidic gases (like SO2 and H2S) produced in the burning of coal and thus prevent their release into the atmosphere. For example,

With amphoteric metals and oxides

Sodium hydroxide slowly reacts with glass to form sodium silicate, so glass joints and stopcocks exposed to NaOH have a tendency to "freeze". Flasks and glass-lined chemical reactors are damaged by long exposure to hot sodium hydroxide, and the glass becomes frosted. Sodium hydroxide does not attack iron since iron does not have amphoteric properties (i.e., it only dissolves in acid, not base). A few transition metals, however, may react vigorously with sodium hydroxide.

NaOH can be used for the base-driven hydrolysis of esters (as in saponification), amides and alkyl halides. However, the limited solubility of NaOH in organic solvents means that the more soluble KOH is often preferred.

In the laboratory, with careful control of conditions, sodium metal can be isolated from the electrolysis of the molten monohydrate in a low temperature version of the Castner process, according to the following reaction:

The monohydrate does not need to be heated in order to melt, as the process produces enough heat due to ohmic heating. However, it must be initiated with a small quantity of liquid water to create an electrically conductive electrolyte. As the system's temperature increases, the monohydrate will start to melt at about 65 °C as stated above. Only when the temperature reaches about 100 °C can sodium be isolated. Below this temperature, the water produced will react with the sodium, above this point, any water formed will be driven off in the vapour phase, creating an essentially anhydrous reaction. While this process has some advantages over other electrolytic processes, it is not preferred by most chemists for several reasons: a marginal quantity of sodium produced boils at the electrode interface, the vapour thus given off consists primarily of fumed sodium oxide, which tends to settle on any surface in close proximity with corrosive consequences.

Of historic interest is the Leblanc process, which produced sodium carbonate, followed by roasting to create carbon dioxide and sodium oxide, which readily absorbs water to create sodium hydroxide. This method is still occasionally used. It helped establish sodium hydroxide as an important commodity chemical. The Leblanc process was superseded by the Solvay process in the late 19th century.

Sodium hydroxide is produced (along with chlorine and hydrogen) via the chloralkali process. This involves the electrolysis of an aqueous solution of sodium chloride. The sodium hydroxide builds up at the cathode, where water is reduced to hydrogen gas and hydroxide ion:

The Cl– ions are oxidized to chlorine gas at the anode.

To produce NaOH it is necessary to prevent reaction of the NaOH with the chlorine. This is typically done in one of three ways, of which the membrane cell process is economically the most viable. 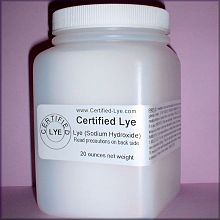 56 % of sodium hydroxide produced is used by the chemical industry, with 25 % of the same total used by the paper industry. Sodium hydroxide is also used for the manufacture of sodium salts and detergents, for pH regulation, and for organic synthesis. It is used in the Bayer process of aluminium production.[1]

Sodium hydroxide is used in many scenarios where it is desirable to increase the alkalinity of a mixture, or to neutralize acids.

For example, sodium hydroxide is used as an additive in drilling mud to increase alkalinity in bentonite mud systems increases the mud viscosity, as well as to neutralise any acid gas (such as hydrogen sulfide and carbon dioxide) which may be encountered in the geological formation as drilling progresses.

In the same industry, poor quality crude oil can be treated with sodium hydroxide to remove sulfurous impurities in a process known as caustic washing. As above, sodium hydroxide reacts with weak acids such as hydrogen sulfide and mercaptans to give the non-volatile sodium salts which can be removed. The waste which is formed is toxic and difficult to deal with, and the process is banned in many countries because of this. In 2006, Trafigura used the process and then dumped the waste in Africa.[9][10]

Sodium hydroxide was also widely used in making paper. Along with sodium sulfide, NaOH is a key component of the white liquor solution used to separate lignin from cellulose fibers in the Kraft process. It also plays a key role in several later stages of the process of bleaching the brown pulp resulting from the pulping process. These stages include oxygen delignification, oxidative extraction, and simple extraction, all of which require a strong alkaline environment with a pH > 10.5 at the end of the stages.

In a similar fashion, sodium hydroxide is used to digest tissues, such as in a process that was used with farm animals at one time. This process involved placing a carcass into a sealed chamber, then adding a mixture of sodium hydroxide and water (which breaks the chemical bonds that keep the flesh intact). This eventually turns the body into a coffee-like[11][12] liquid, and the only solid that remains are bone hulls, which could be crushed between one's fingertips.[13] Sodium hydroxide is frequently used in the process of decomposing roadkill dumped in landfills by animal disposal contractors.[12]

Strong bases attack aluminium. Sodium hydroxide reacts with aluminium and water to release hydrogen gas. The aluminium takes the oxygen atom from sodium hydroxide (NaOH), which in turn takes the oxygen atom from the water, and releases the two hydrogen atoms, The reaction thus produces hydrogen gas and sodium aluminate. In this reaction, sodium hydroxide acts as an agent to make the solution alkaline, which aluminium can dissolve in. This reaction can be useful in etching, removing anodizing, or converting a polished surface to a satin-like finish, but without further passivation such as anodizing or alodining the surface may become degraded, either under normal use or in severe atmospheric conditions.

In the Bayer process, sodium hydroxide is used in the refining of alumina containing ores (bauxite) to produce alumina (aluminium oxide) which is the raw material used to produce aluminium metal via the electrolytic Hall-Héroult process. Since the alumina is amphoteric, it dissolves in the sodium hydroxide, leaving impurities less soluble at high pH such as iron oxides behind in the form of a highly alkaline red mud.

Other amphoteric metals are zinc and lead which dissolve in concentrated sodium hydroxide solutions to give sodium zincate and sodium plumbate respectively.

Sodium hydroxide is traditionally used in soap making (cold process soap, saponification).[14] It was made in the nineteenth century for a hard surface rather than liquid product because it was easier to store and transport.

For the manufacture of biodiesel, sodium hydroxide is used as a catalyst for the transesterification of methanol and triglycerides. This only works with anhydrous sodium hydroxide, because combined with water the fat would turn into soap, which would be tainted with methanol. It is used more often than potassium hydroxide because it is cheaper and a smaller quantity is needed.

Sodium hydroxide is frequently used as an industrial cleaning agent where it is often called "caustic". It is added to water, heated, and then used to clean the process equipment, storage tanks, etc. It can dissolve grease, oils, fats and protein based deposits. It is also used for cleaning waste discharge pipes under sinks and drains in domestic properties. Surfactants can be added to the sodium hydroxide solution in order to stabilize dissolved substances and thus prevent redeposition. A sodium hydroxide soak solution is used as a powerful degreaser on stainless steel and glass bakeware. It is also a common ingredient in oven cleaners.

Hardware store grade NaOH to be used as drain cleaner 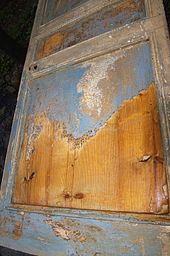 Sodium hydroxide is used in the home as a drain cleaning agent for clearing clogged drains. It is distributed as a dry crystal or as a thick liquid gel. The chemical mechanism employed is the conversion of grease to a form of soap. Soap is water-soluble, and can be dissolved by flushing with water. This conversion occurs far more rapidly at high temperatures, so commercial drain cleaners may also contain chemicals that react with water to generate heat. Sodium hydroxide also decomposes complex molecules such as the protein that composes hair. Such drain cleaners and their acidic versions are highly caustic and should be handled with care.

Sodium hydroxide is used in some relaxers to straighten hair. However, because of the high incidence and intensity of chemical burns, manufacturers of chemical relaxers use other alkaline chemicals in preparations available to average consumers. Sodium hydroxide relaxers are still available, but they are used mostly by professionals.

A solution of sodium hydroxide in water was traditionally used as the most common paint stripper on wooden objects. Its use has become less common, because it can damage the wood surface, raising the grain and staining the colour.

Solid sodium hydroxide and solutions of more than 2%[citation needed] by weight (0.5 M) should be labeled as corrosive. 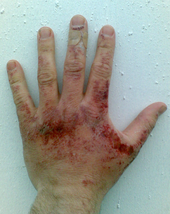 Chemical burn caused by exposure to a less than 10% sodium hydroxide solution.